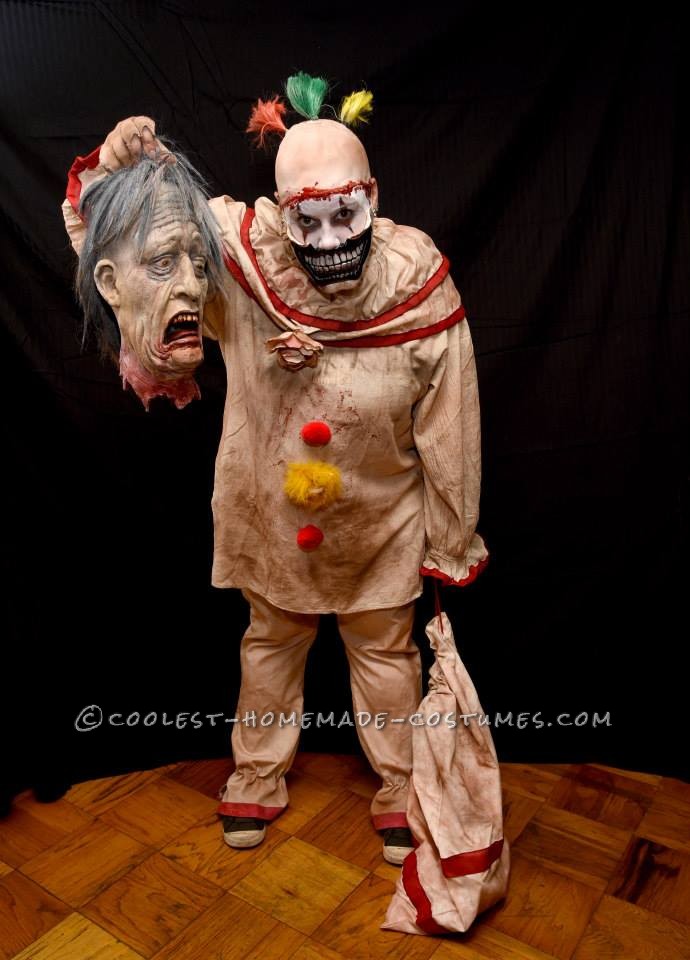 I originally planned on dressing up as a zombie clown for Halloween when American Horror Story started. I saw the Twisty character and thought it was the scariest clown I had seen and thought it would be a great costume. The problem was I only had a little over two weeks to accomplish it and I work a lot. After watching the second episode and seeing the clown again, I knew I HAD to do it.

I started by getting a great thick rubber bald cap, which I trimmed to look like the scalp he is wearing in the show. I cut hair off an old zombie wig and used fabric markers to color the three different hair pieces yellow, green and red. I cut some of the scrap bald pieces into three squares and cut a small hole in the middle. I took the hair and pushed it through the hole, so I had three hair plugs. I then used Krazy Glue and attached them to the bald cap. I also wore a thin latex bald cap under this thicker one, because he is supposed to be bald underneath the scalp he is wearing.

The mask was the bottom half of a scary clown mask, which I cut to match Twisty’s mask as closely as possible. This mask was the closest one I could find to his. The one issue I had was that the mask was made of thick foam and so it didn’t sit on my face correctly. To resolve this, I carved the foam out using scissors and a razor blade. Took a few hours, but I got it thinned down to where it felt comfortable. I then used rubber mask grease paint to repaint the entire mask to look like Twisty’s. This was the most fun part of the entire process, as I love working with rubber mask grease paints because they blend so well. I then made a small hole with a pencil on both sides of the mask and tied elastic to it, which is the same way his is attached in the show.

For the outfit, I found a 1940s girls dress at a thrift shop, and cut the skirt part off. This would become the neck ruffle. I put it on a mannequin and pinned it how I wanted it, then sewed the entire thing, including the hem from where I had cut the top of the dress off. I then bought wired ribbon from Michaels, which I sewed onto the neck ruffle and sleeve opening. This was probably the hardest part because I don’t usually sew, however, safety pins were a lifesaver in getting everything positioned for sewing. The shirt was actually a renaissance shirt that had the perfect bell sleeves, so I reworked the collar, so it wouldn’t show and sewed the red pom poms on.

The yellow pom pom (which is supposed to be different from the others) was made from smaller yellow pom poms and feathers, to match what the clown is wearing. The pants are white scrubs. The girls dress that I turned into the neck ruffle, was already yellowed by age and the renaissance shirt was already a similar color, so I needed to dye the pants to match the rest of the outfit. I used tea to dye the pants which worked perfectly. I had ran out of ribbon for the bottom cuff of the pants (and it was already the night before Halloween) so I used a Sharpie to color the cuff, which achieved close to the desired effect.

I used wire woven through the fabric to actually create that bell cuff look on the bottom of the pants. I cut the fingers of white gloves, like his are. I then wore the gloves when applying my dirt to the costume, so they were as dirty as his. For dirt, so I could get variations in the color, I used black eye shadow mixed with Ben Nye Plains Dust, which is a brown clay kind of color.

The bag I’m carrying is a pillow case, that was already the exact aged color. I sewed the ribbon onto that and I used a thick red shoelace fished through the top of the pillow case hem, to create the drawstring bag. I carried around a severed head (which is shown in the photo) and lollipops which I would randomly hand out to people.

For my makeup, I used Mehron white clown cream makeup and Ben Nye cream makeup, along with a variety of brushes. The blood is from Fleet Street Bloodworks and I only mention it because it is amazingly realistic and actually dries and doesn’t remain sticky, which I love!

Unfortunately, the bummer of the night was it rained all day Halloween, so I didn’t really get to show off my costume. I decided to wear it again the next night, as my husband and I went to see Samhain play in NYC, and people were going nuts over it, so that made up for it a little, ha ha!

Thank you for reviewing my entry! 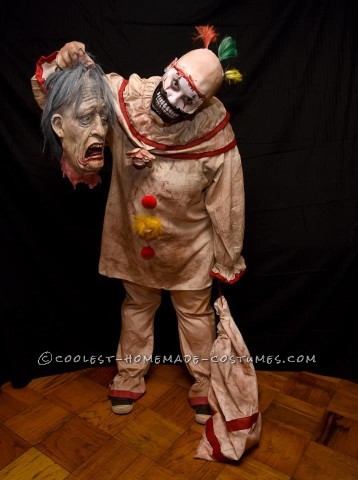 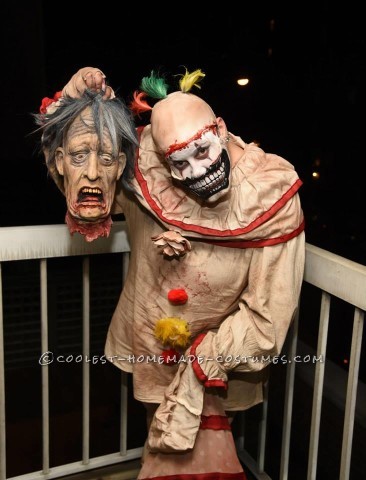 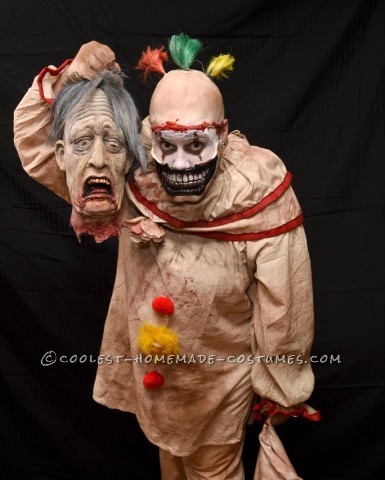 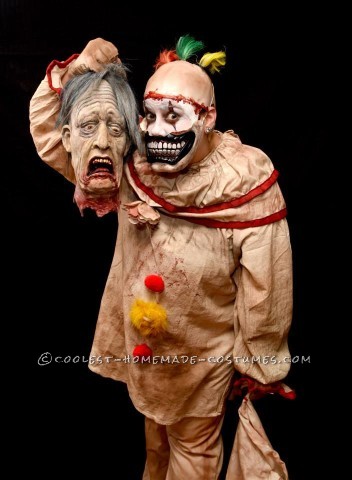 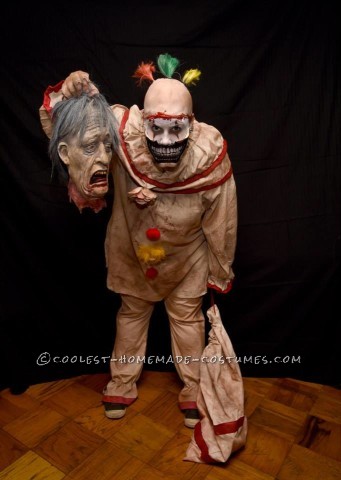 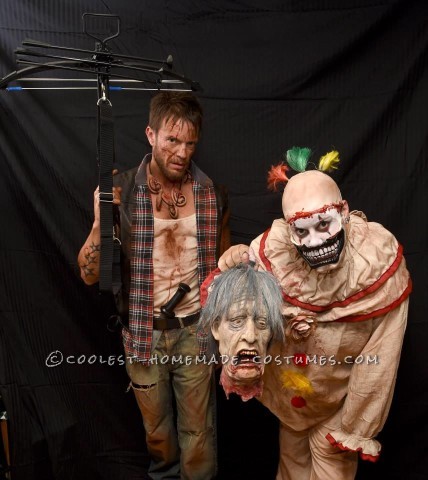 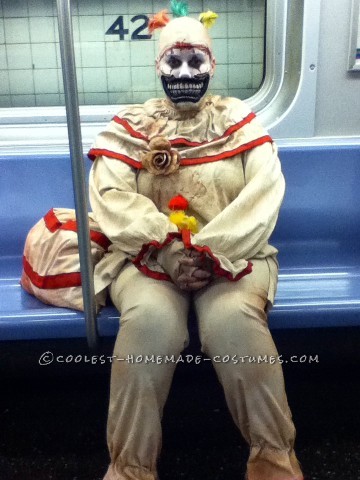 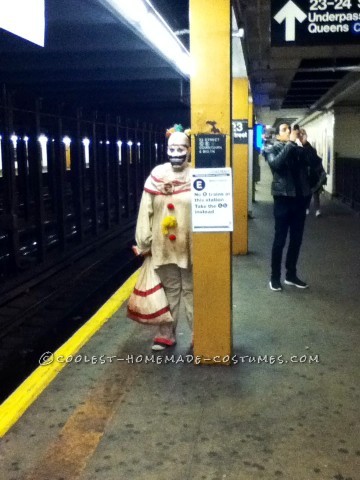 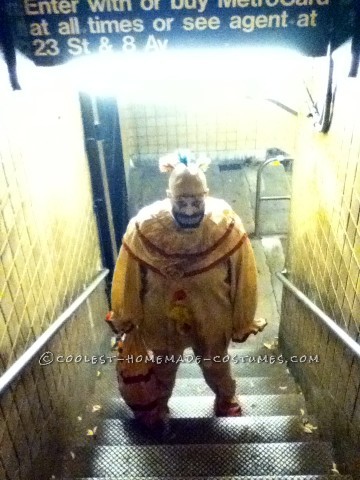