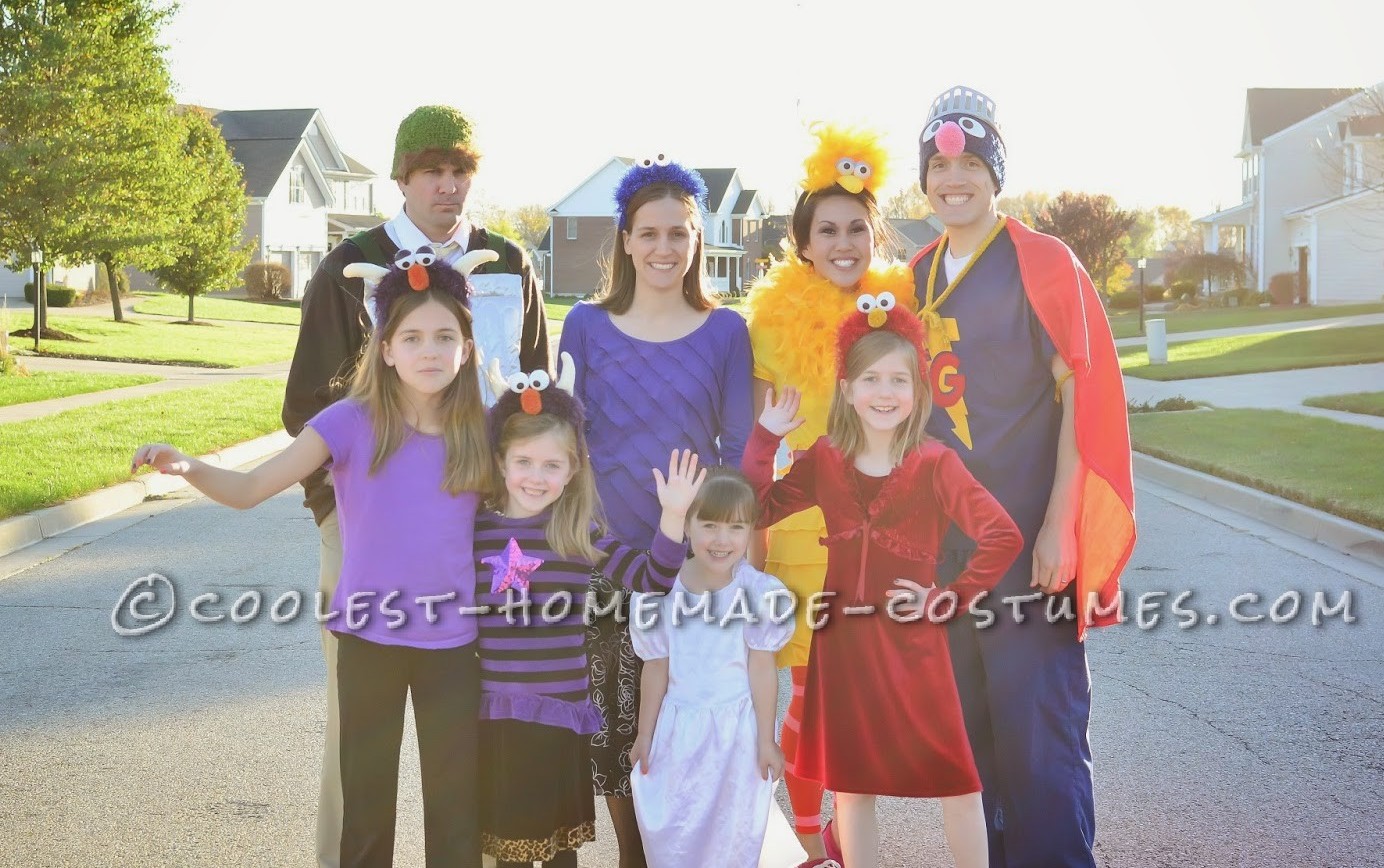 We’ve got a big family, and we wanted to get as many of them involved as we could. It started off with a boyhood dream of wanting to be a super hero, mingled with the love I have for the Sesame Street character, Super Grover. When I was a kid, I thought he was hilarious. Always happy, always helpful; well, almost. It was my turn to pick the costume this year. My wife wasn’t too excited when I informed her that I was going to be Grover and she was going to be Cookie Monster.

After a bit of back and forth, presenting cases for and against the promotion, coupled with several hours of scouring the internet for other options, my wife finally conceded by saying, “Well fine, then. I’m going to be Big Bird.” Keeping in mind that she is the shortest member of the family.

My first thought for our costumes was a simple idea, a couple of headbands and t-shirts, matching the color of the character. At this point, you need to understand that this is a joint effort between the both of us, but she definitely has more skills than me. So when she wants something, she usually gets it because she’s the one who’s probably going to end up creating it anyway. She wanted to be cute, and didn’t think that a t-shirt would pull it off, so she came up a with different idea for her costume. A headband, and a do-it-herself ruffly dress, complete with feathery boa, orange  tights, pink belt, a shoes to match. 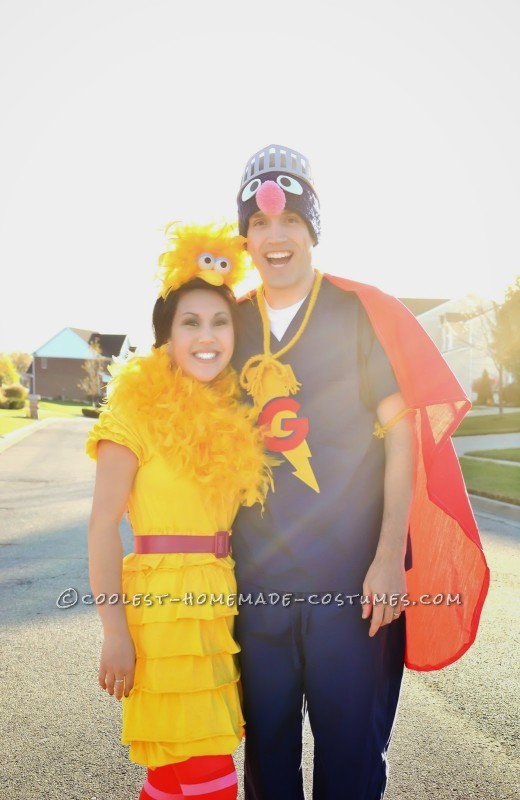 The headband: Consisted of a small headband that she attached felt to at the arch to create a platform for Big Bird’s beak, eyes, and feathers. The feather came from a boa that we trimmed. The eyes are just two ping-pong balls, painted and glued together with craft foam to recreate the eye lids.

The dress: Is actually just a couple of t-shirts, one her size and the others sequentially larger than the next. She cut strips out of the larger shirts and sewed them layer by layer to create a ruffly dress. She did the same with the sleeves. Luckily, she already had a pair of orange tights, but in order to get the stripes right, we used Coflex, self-adhesive, wrap. It worked like a dream. 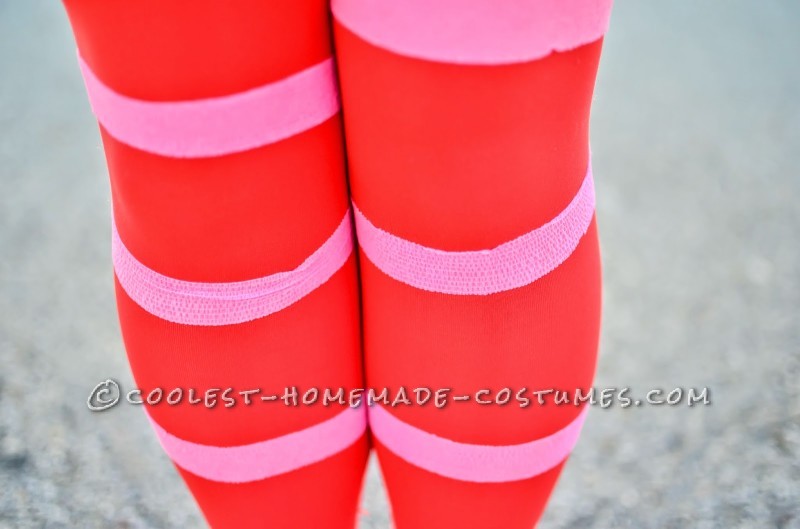 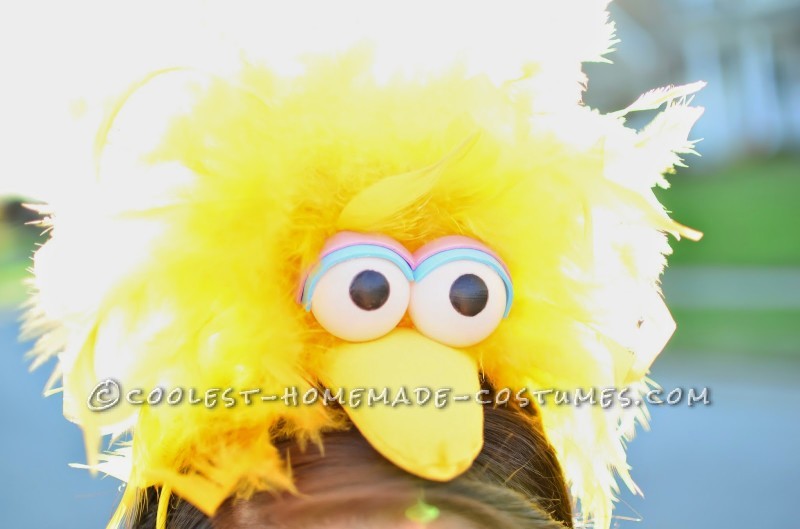 The suit: It’s just a pair of old scrubs I had in my drawer with. We cut and sewed felt for the insignia.

The cape: A large red piece of fabric, hemmed. We braided yarn for the neck and arm ties.

The hat: My wife crocheted the beanie from some fancy yarn. We couldn’t believe how much it resembled Grover when she was done. The eyes are two layers of craft foam glued together with black paper mod-podged on for pupils. The under layer of the foam is stitched to the hat for stability. The pink nose was fun cuss ball that I trimmed and shaped to match.

The helmet: This was an ordeal. I tried tin foil, duct tape, craft foam. I was even considering using a gray baseball cap. Got sick of the project and then looked towards the internet for an answer. I found the perfect helmet, to my dismay, I couldn’t find it in adult sizing. Luckily, my wife found a plastic camouflage army hat at the store. Then, I was off like a racehorse. I pulled out the gray primer and painted the hat. I took what was left of my foam disaster, and trimmed the pieces and parts to look like a decent knight’s helmet, and glued them on with hot glue. It worked. 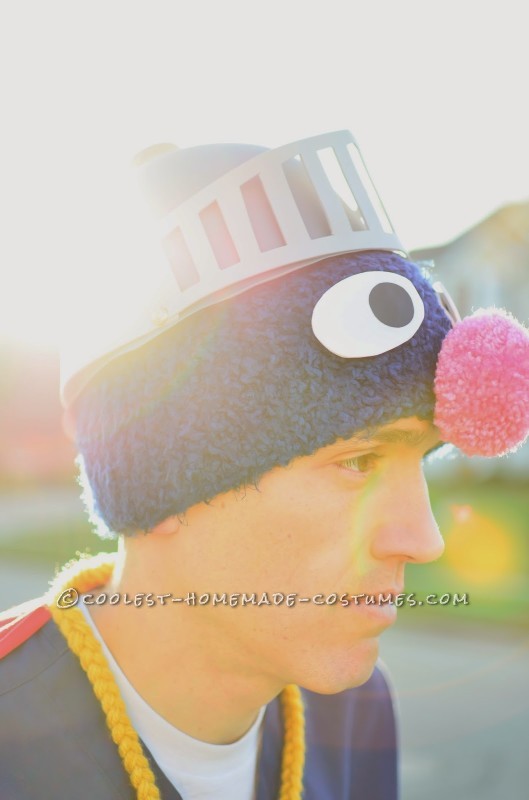 The hat: My wife cranked out another beanie. She did it during nap time at preschool. After noticing a slight extension to their usual nap time, the kids were all wondering if they could get up yet. She promptly responded with a no. She was so close to finishing the beanie and was determined to get it done. That she did, and the kids were definitely well rested. That night, I added the brows with fake fur, trying really hard to capture Oscar’s attitude in faux fur form.

The trash can: Silver fabric, cut to shape, and quilted. Nothing fancy. 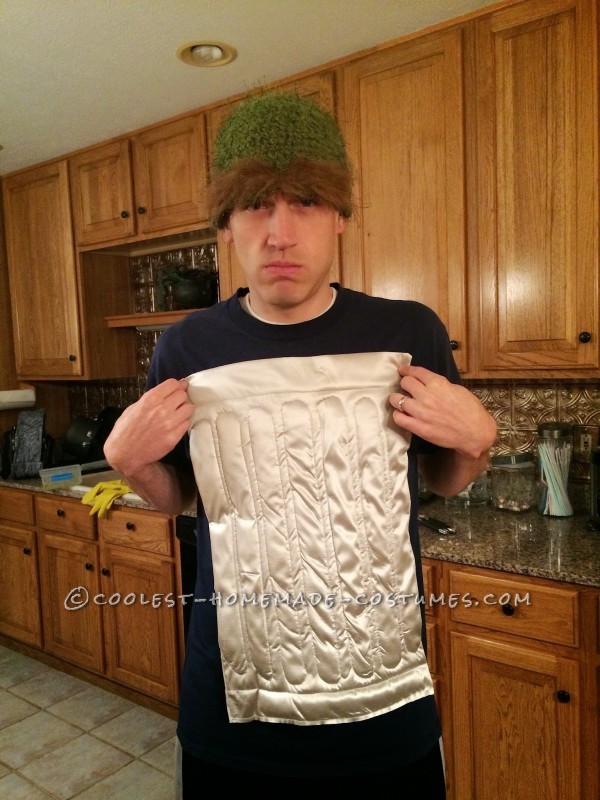 My wife took skinny head bands and wrapped them with yarn first to give them a thicker appearance, and provide us with a better base for attachments. She then crocheted a ~2 x 6 in patch, which she wrapped around the head band and stitched together. The eyeballs are made from painted ping pong balls, I used the center of a CD as a stencil to get the right pupil diameter. The noses were just koosh balls, yarn wrapped around a fork, tied off, and trimmed with scissor to shape. We use hot glue to attach the eyes and just tied on the noses. The horn on the twin monsters were just mini felt pillows, attached with needle and thread.

People were amazed by the work. Some even wondered if we were selling. Naa! They’ll go in our collection, eventually to be recycled for another awesome Halloween. 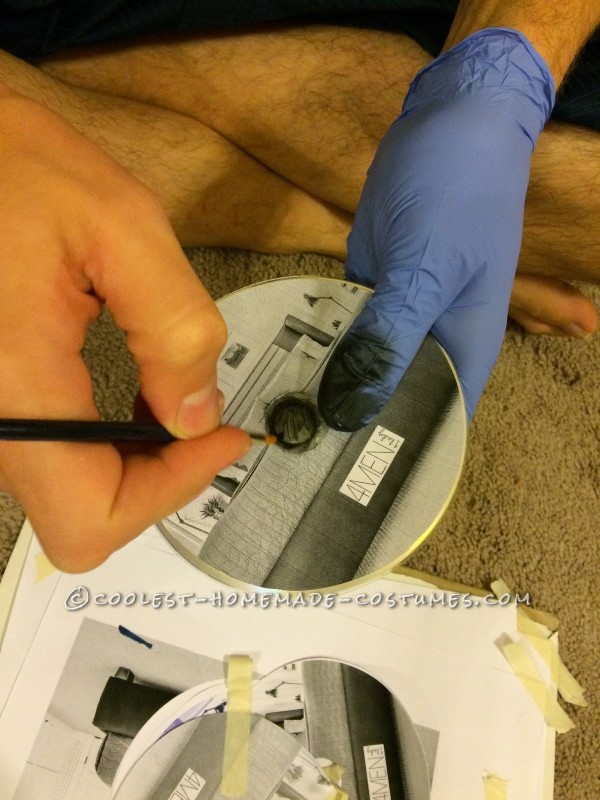 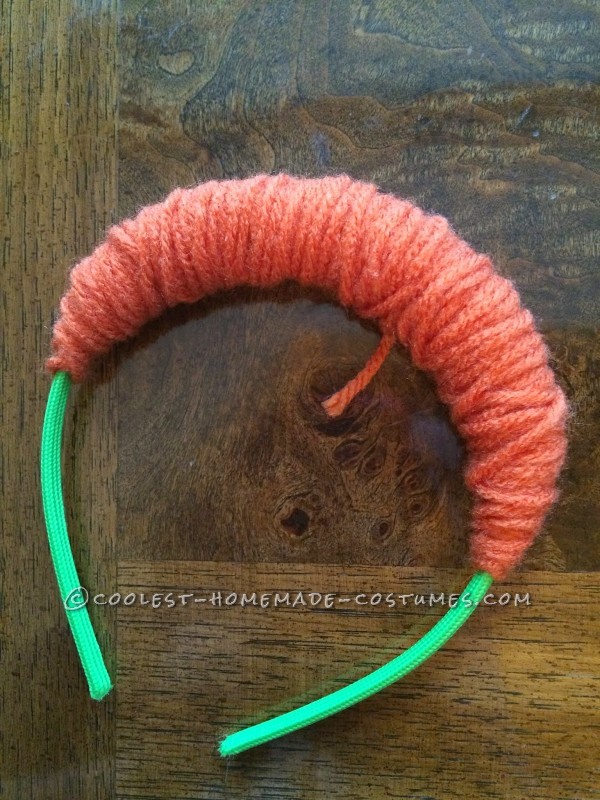 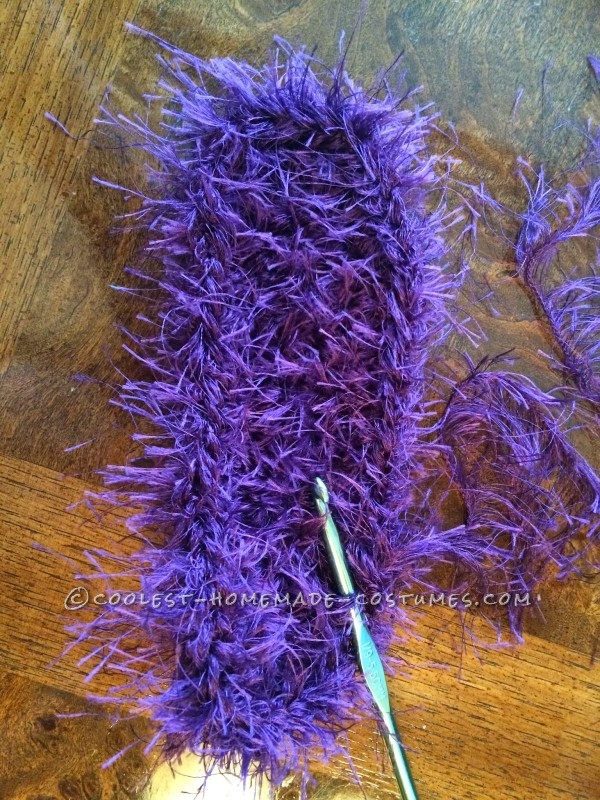 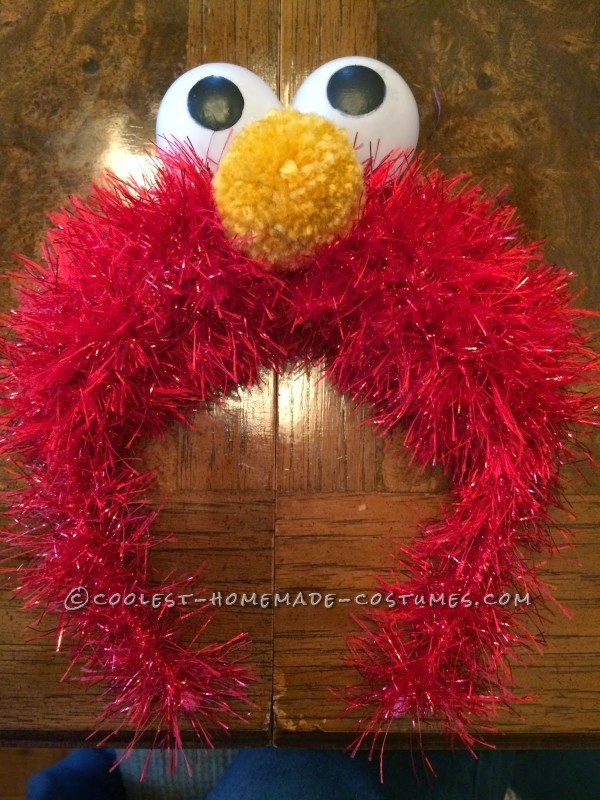