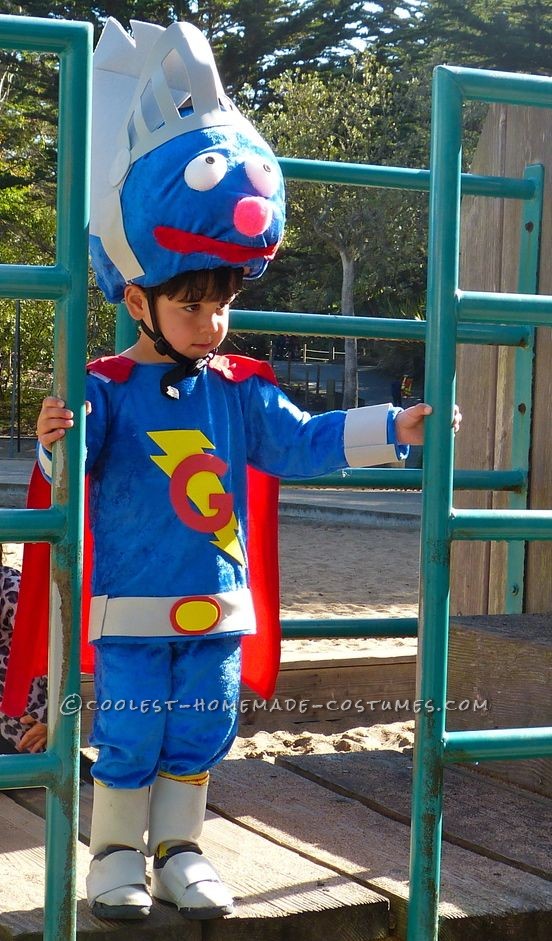 I was so happy when Ezra (turned 3 on November 1st) gravitated to the idea of being Super Grover instead of Elmo!   However I still waited until a week before Halloween to get going.  The top and pants were sewn using a set of his carter’s pajamas as a pattern, I have basic sewing skills and it went pretty quickly even though it was my first try.

The Grover logo, wristbands, “belt”, and boot covers were cut and glued on using craft foam.  For the head I started with a bicycle helmet, put partial pillowcase stuffed with cotton on it, and glued the same fabric around the edge of the helmet to hold it down.  The eyes are Styrofoam with felt, and the nose is a pom.  The biggest waste of time was going to Old Navy for yellow “utility socks”, with red stripes sewn onto them for authenticity, but they kept falling down.

For the hat I wanted the center piece to stick up and after several variations ended up gluing two regular felt rectangles to a large piece of poster board  with stiffened felt in the middle folded in half and held down by the side pieces.  After I attached the front piece of the hat I realized I had mixed up Grover’s hat pieces!  Who know Grover was so versatile with his headgear.  Ezra didn’t notice – I guess his powers of observation are still developing – so I let it be.

Lastly I cut the cape  and attached it over his shoulders with Velcro.  I started everything Thursday morning and finished Saturday night, about 15 hours.  The best part was seeing him ricochet like a pinball in the bounce house at preschool, minus the head of course, but with cape flying!  And thanks to the wonders of the hot glue gun, the costume survived that ordeal for trick-or-treating later in the day.