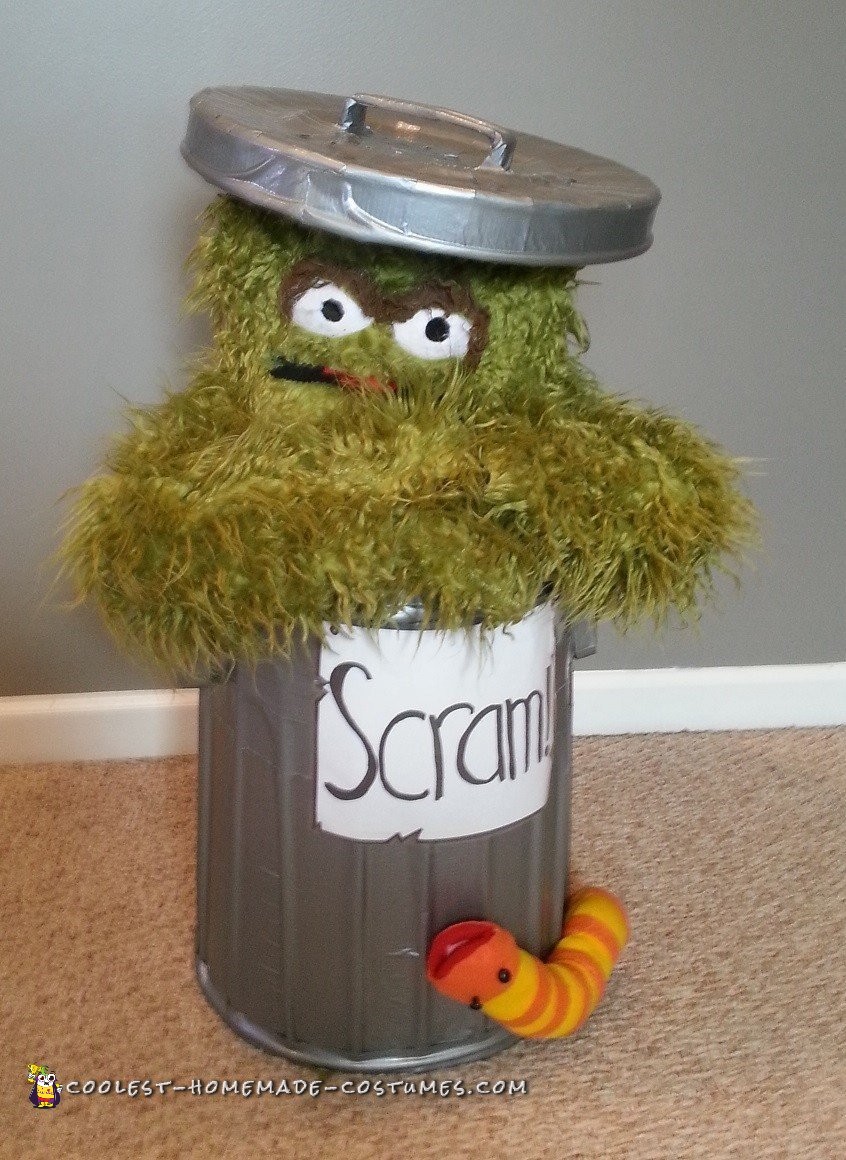 My son and I were watching Sesame Street like we usually do. On this particular day when Oscar the Grouch came on his face lit up! “I know what I want to be for Halloween this year” he exclaimed. “I want to be Oscar the Grouch!” Of course I had to ask him why. He said to me, “I’m always happy but sometimes I can be a little grouchy.”  I smiled at him and said, “Oh honey, I think we can all be a little grouchy sometimes.”

His Oscar the Grouch costume idea brought back many childhood memories as I sat there and thought of the countless hours I had spent watching Sesame Street while I was growing up. My son had given me a challenge as well as the opportunity to relive my childhood and remind many other people of theirs. My very enthusiastic about Halloween, 5 year old, inspired me to turn him into the most beloved and famous grouch of all times.

The Creation of the homemade Oscar the Grouch Costume

I must be honest and admit that I tried to take a shortcut by buying a costume and later on just working on the trash can and Slimey (his pet worm). Once I started searching for it I quickly realized there is no such thing as an Oscar the Grouch store bought costume for kids his age. This costume was going to have to be 100% homemade.

I went all over Chicago looking for Olive Green faux fur but never found it. I finally found it on Amazon for $19.99 a yard. I bought a yard which my mother used her sewing machine to sew the fabric onto a zippered sweater and a pair of pants my son already owned. Fabric was also sewn onto a pair of stretchy $1.00 gloves.

The mask was a little bit trickier since Oscar the Grouch has a wide sort of football shaped head. We used a double layer ski mask and opened up the top layer to stuff the sides of his head to give it the wide egg shape. Once it was to our liking the fabric was sewn onto it. The filling was polyester filler that I took out of a pillow I had stuffed for my son a while ago.

The large spherical eyes were made out of two plastic balls that came directly from my son’s ball pit. White felt was glued onto half of the spheres. After which, holes were made and stretched out black sheer tights were glued on the inside of the balls such as to create Oscar’s pupils.  This material allowed for him to see while still giving the illusion of black pupils to those around him.  The eyes were brought together via the bushy brown unibrow and this was then glued to the front of the mask. The eyebrows were made of a strip of left over faux fur that was painted brown with a $1.00 acrylic paint.

The can was made out of a cardboard cylinder canister that for the last 20 years contained my brother’s childhood toys. Some which ironically enough contained Sesame Street characters. I guess it was only fitting enough for him to help out with this part of the costume. He used nylon rope to create the raised ridge pattern. The rope was routed and taped into place around the entire can. After the pattern was completed, duct tape was used to cover the can. Duct tape turned out to be a perfect choice because it gave the can an older rustic look.

A cardboard cylinder found on clothes hangers was used as the hinge for the handles. Using cardboard, more duct tape, and clothes hanger wire, we were able to create rather sturdy and functional trash can handles. My son was able to grab these handles to carry the can around him as he walked.

The can cover was made in similar fashion. Velcro was glued to the inside of the can cover and mated to sewed on Velcro at the top of the Grouch mask. This allowed for him to remove the heavier can top when it wasn’t needed to relieve stress from his child sized neck.

Slimey the worm was made from a yellow tube sock. It was stuffed from the same material as the mask.  Orange felt was cut into a 1 inch wide strip and by using a glue gun was glued on to the sock.  The mouth and tongue were also made from felt. His eyes were two black buttons that were sewn onto the sock. Slimey remained intact on the trash can by using wire that went through the trash can.  The word “Scram” was written on a piece of paper that was laminated. A piece of black string was glued to the paper and can to hold the sign still.

We expected to get good feedback from people because of how realistic it looked, but we weren’t prepared for such a huge reaction from both kids and adults. My son competed in 10 local costume contests and won a prize in all 10.  In 9 of those contests he won 1st place and in one contest he got 2nd place.

My son became an instant celebrity when he was in costume. Young kids were in awe and wonder to see him but at the same time sort of scared to get too close. Kids his age and up thought he was the real Oscar the Grouch and wanted to touch him, high five him and talk to him. Parents acted like we were present for a character greeting. Many insisted that their children take a picture with him.  Adults wanted to take his picture and I’m sure post it on social media. Many adults would come very close and stay nearby in hope of getting a glimpse of who was really under that mask and in that little trash can. One even asked if he could take the mask off. Many were in disbelief that this was actually a little boy dressed up in a costume. Someone had made a comment of him looking like an animatronic.

When I showed pictures I got asked where my son was at. Honestly, many never believed that was really him. It was something you had to see in person to believe it. For this reason, I am also submitting a photo of my son inside the can and without a mask. The most shocking reactions came from someone who asked for a business card as well as a price quote for a costume. Also a parent who asked if he was available for their son’s 3rd birthday party. He insisted that he would be perfect because of his size and non-scary look.

This realistic homemade Oscar the Grouch costume was loved by people of all ages! I’m happy we were able to bring so many smiles, stop to pose for pictures with many, and most importantly make my son feel proud of what he was doing.

I could have never imagined how realistic this costume was going to turn out to be. It was the best costume by far and even though none of us are professional costume-makers this wasn’t our first year making a costume. We have tried to be as creative as possible since my son’s first Halloween.

For us, costume making is not a job – it’s a time to bond.  Our costumes are made with very little money. Imagination and creativity go along way when it comes to costume making. You don’t have to invest a lot of money to end up with a great costume. This costume cost under $40 to make and that includes a $10 shipping fee that was necessary to purchase the fur.

Every year I look forward to collaborating with my family to transform a simple idea into a one of a kind creation. Costume making is the perfect bonding experience for us. I truly loved working on this costume! It was a perfect team effort which allowed each person to truly focus on what they are best at. People’s reactions to our costumes inspire us to make them year after year. I’m sure this family tradition will continue for years to come. 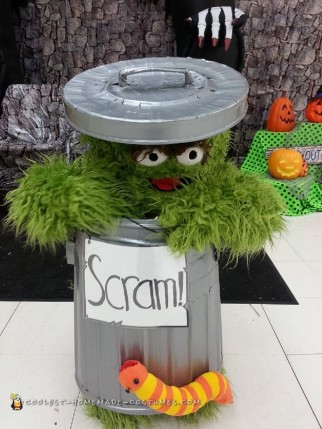 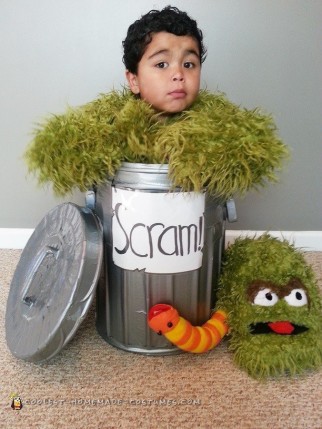 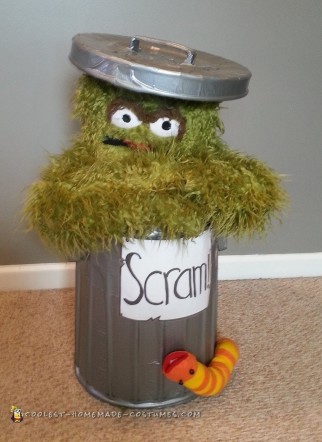 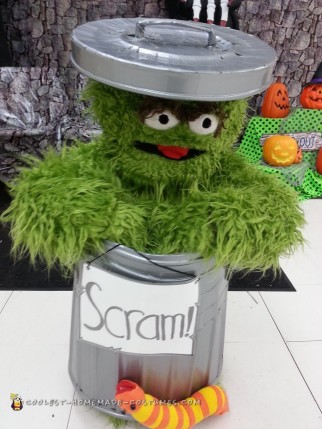