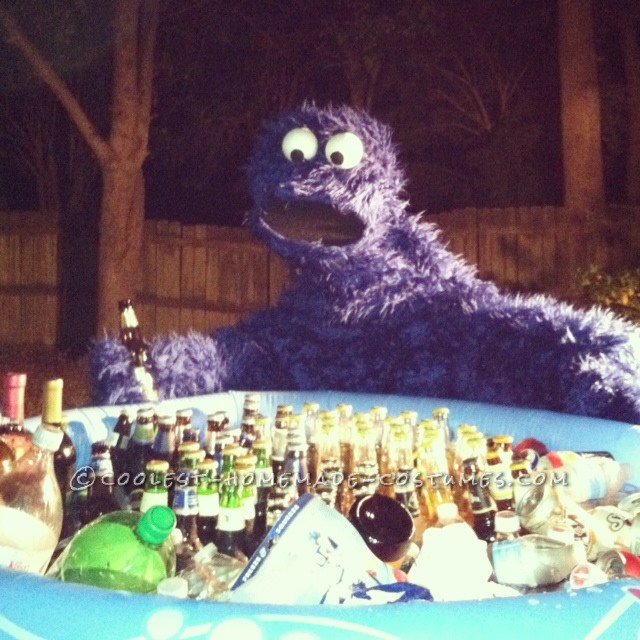 I always love putting together costumes for Halloween. After struggling to figure out how to make this year’s costume, I was walking through the fabric store, saw some blue fur and instantly had a new idea. COOKIE MONSTER! I pulled out my phone and looked up some pictures to get an idea of what would be needed.

After taking a few quick measurements in the store, I decided that 4 yards of fabric would be about right. The cost of the fabric was $91 and was the main cost of the costume. The total cost was a little less than $120. I originally thought of making a top and bottom half to the costume but realized it would look much better if it was seamless. I went to the thrift store and found a set of work coveralls. The only in-progress picture shows the coveralls from the front. I cut open the back in order to get in and out of the costume.

I used hot glue to attach some fabric around the arms and belly and then stuffed the fabric. This added some bulk to the Cookie Monster. It was also very helpful to stuff the coveralls with towels in order to have it keep it’s shape. I then started the process of attaching the fur. This was mainly done with hot glue. Since the fur is pretty thick, as long as you get the seams really close, you didn’t see them. I laid out the stuffed coveralls over the fabric and cut out the basic shape and then did my best to wrap, cut and glue everything into place.

The hands were an old pair of heavy duty work gloves that I glued the fabric to. The feet were made of an old pair of sneakers with a piece of cardboard duct taped to the bottom to make them bigger. I started attaching the blue fur fabric, added a little stuffing to make the shape right, and then finished covering them. At that point, it was just the head and neck to go. I made the mouth out of cardboard and used a couple wire pieces to help hold its shape. I then took an old baseball cap, cut the brim off and hot glued a cardboard ring to the top. After that, I figured out the basic length and width of the head and cut out another cardboard piece and glued it to the cardboard ring.

I glued the mouth to the front part of the cardboard and then used some foam pieces (camping pad and carpet padding) to build up the shape of his head. I then used a little stuffing to round off the edges and covered it in fur. Overall, the neck was the hardest part. At that point, I did have to do some sewing (just a needle and thread) to add some additional fabric and get it looking right.

I also made the costume for my wife. It was just cardboard, fabric and stuffing and cost about $15. The only real issue with the costume was that it could be fairly warm. I went to a couple costume parties in town and I found out one thing really fast. People LOVE the COOKIE MONSTER. I took hundreds of pictures with people which was pretty fun. Wow…. I almost forgot. The eyes are Styrofoam balls that have hard plastic tubes inserted through them. I attached black plastic pieces (pupils) to fairly rigid wire and stuck the wires through the tubes and bent the wire in back to hold them in place. This allowed the pupils to move back and forth to give him the googly eyes.

I’m already looking forward to figuring out what next year’s costume is going to be! 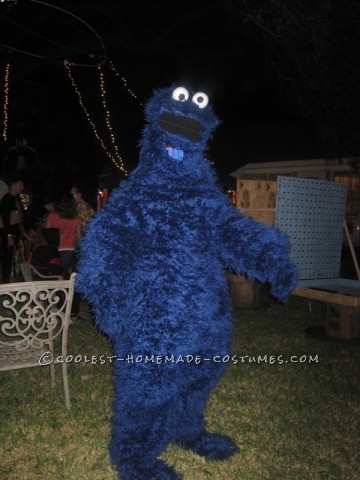 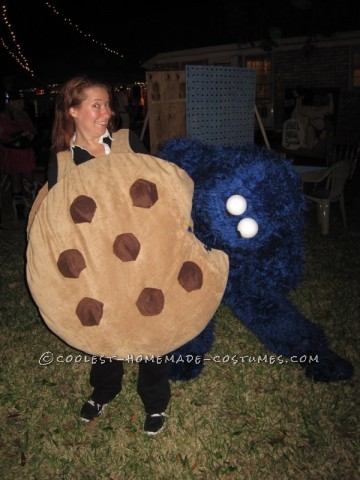 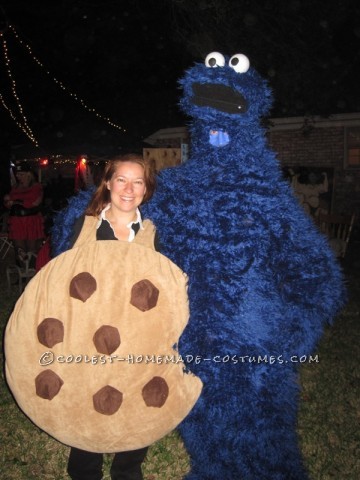 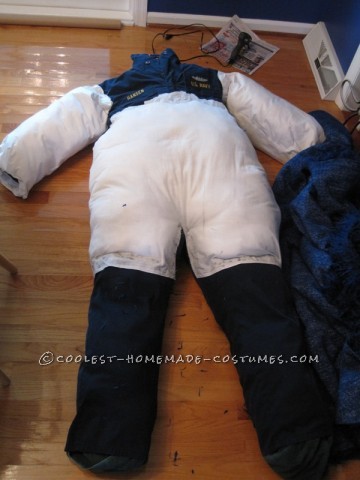