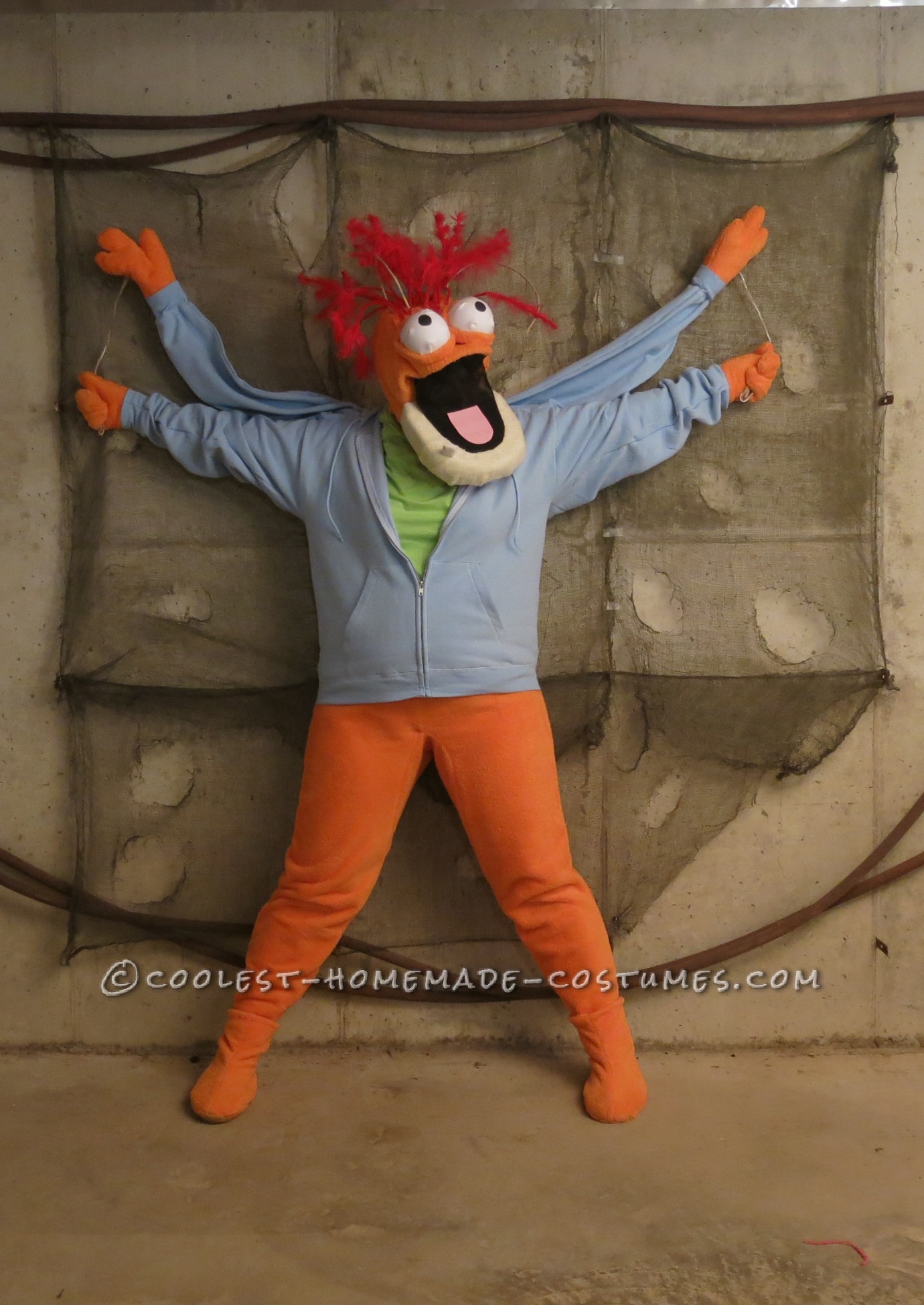 Every year, my friends and I throw a Halloween party with a theme. This year, the theme was Muppets. I’m a huge fan of the Muppets and have been looking forward to this theme for years. I decided that I would go as Pepe the King Prawn. While not one of the original or more regularly occurring characters (his first appearance was on Muppets Tonight), I’ve always loved Pepe and his fiery attitude – he is not a shrimp, he is a king prawn… okay?

First things first, I had to do a little character research and decide which version of Pepe I wanted to go as. I decided to dress as Pepe from Muppets from Space. I also read up on his background (thank you Muppet Wiki), and of course watched Muppets from Space for research. It doesn’t exactly fit in with my usual Halloween movie repertoire, but who doesn’t like watching Muppet movies?

I like to figure out in advance what I will need to make each piece of the costume. I’m a very visual person so I like to print out images of the character and map out exactly what I need for every component. This way I know I’ve got everything covered and can just check things off as I get them. I also love making lists and there is no better feeling than checking something off your list! 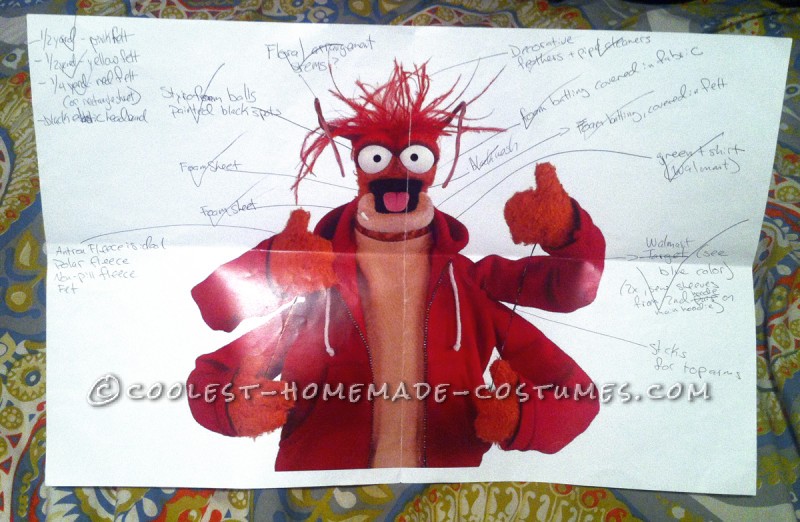 The map to costuming is cluttered and bright

Once I had everything mapped out, it was time to go shopping. Off to the fabric store!

I found the perfect type of fabric to achieve the texture of Pepe’s Muppet “skin,” the only problem was that it was white, not orange. But I figured, hey, why not try dyeing it? I had never done it before, but how hard could it be? 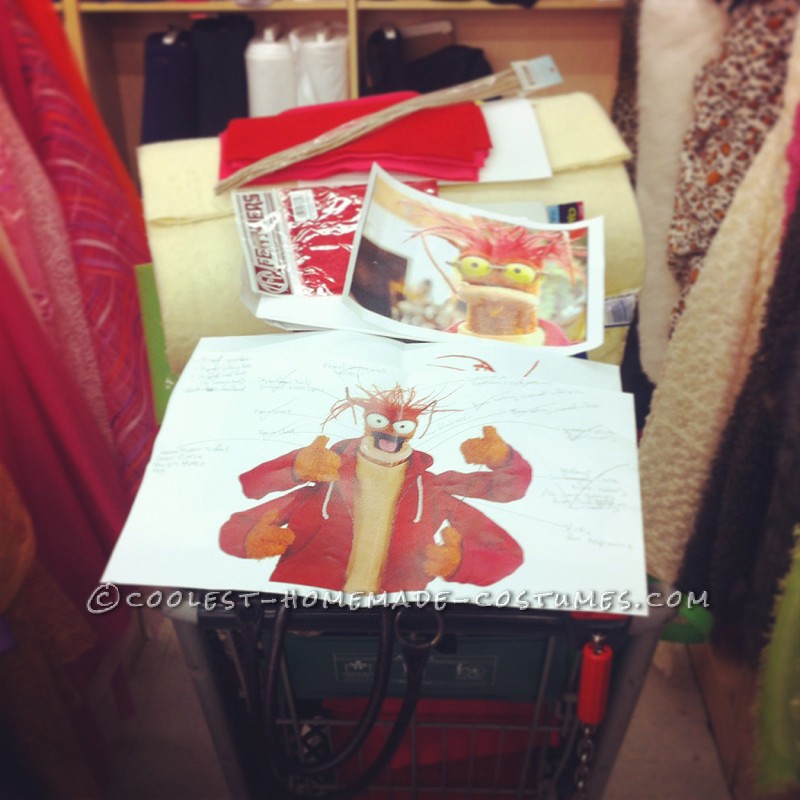 Do it yourself and don’t get discouraged

Well, when fabric is 100% polyester, the answer is hard. I found the fabric dye (Jacquard iDye Poly Orange) at an art supply store. It warns you right off the bat that synthetic fibers don’t take well to dyeing and the results might not turn out exactly how you want. But I took my chances. Problem is, for polyester, you have to boil the water and the fabric in order to dye it. And when you need to dye 3 yards of fabric, well you need a pretty big pot. Here is where it got tricky.

I wasn’t about to spend $70+ on a pot that I couldn’t then use to cook food in after, (safety first!). So I put out a request to the world of Facebook. Apparently no one else had one dedicated to fabric dyeing that was big enough either. So, stuck with the materials at hand and not wanting to waste them, I decided I would give it a go by using a large beverage tub, (one that is generally used for barbecues), and a LOT of boiling water.

I live in an apartment in New York City with 2 other roommates, where the living room is in the kitchen. I had to plan this carefully. I had all 4 burners on my stove going, with pots filled with boiling water, I brought the tub into the kitchen and started pouring the water into the tub to dissolve the dye. I added the fabric once it was dissolved and kept refilling the pots so that there was always boiling water ready to go into the tub to keep it at a rolling boil. I had to sit there for just about an hour stirring the fabric in the tub. I felt like a witch at her cauldron! It was exhausting and it smelled. But it appeared to be working!

When it was done and cool enough to remove, I hung it in my backyard to dry. Now I had a large tub filled with blood red water to dispose of. To the bathtub! It sure made it look awfully Halloween-y in there!

Once the fabric was dry, I realized, while it had dyed evenly, it ended up being a pale peach color. Pepe is a pretty intense orange color, so this just wouldn’t do. I had no choice but to find something else. Since I was quickly approaching my deadline (the weekend before Halloween), I ran over to Target and found a large orange fleece blanket. At this point it would have to do. 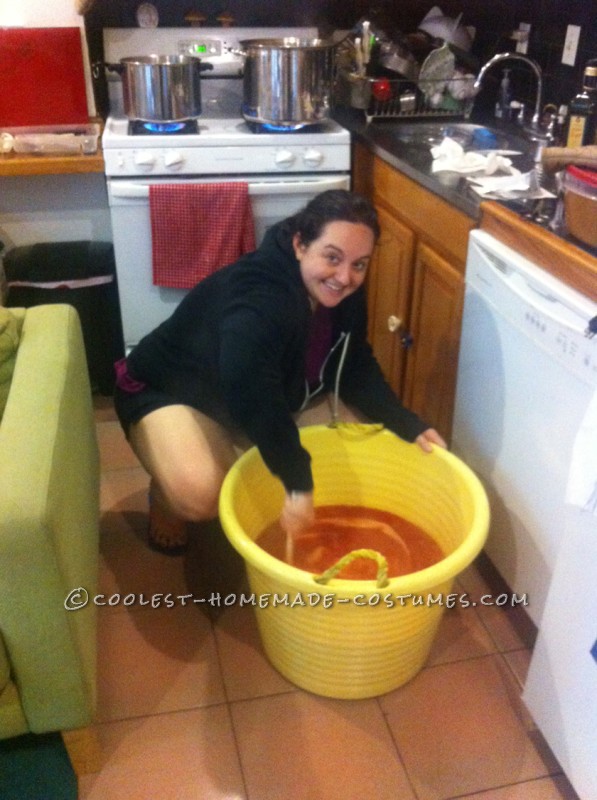 A DIY witch and her makeshift cauldron 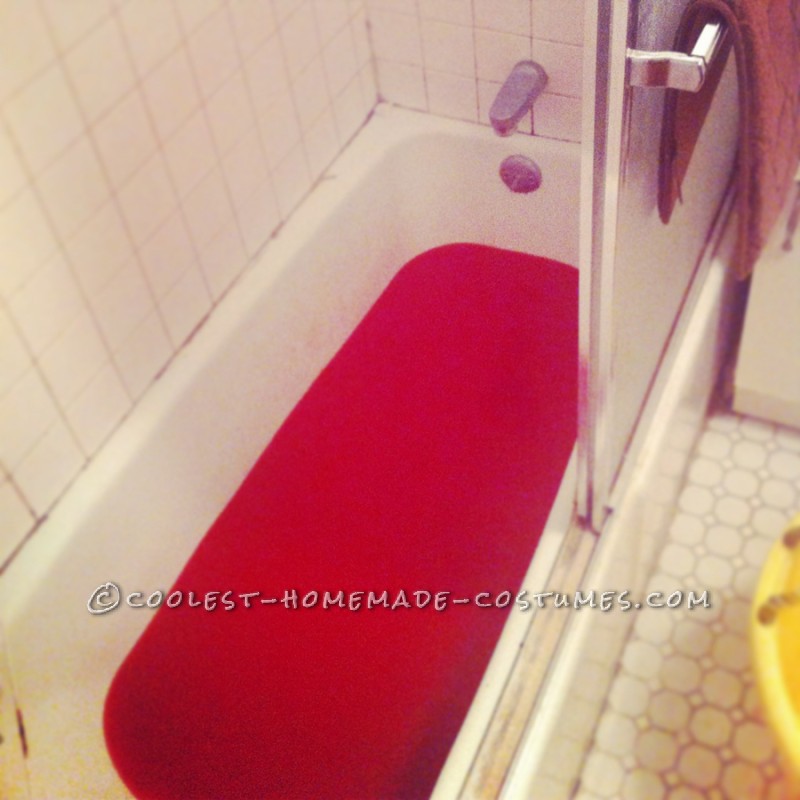 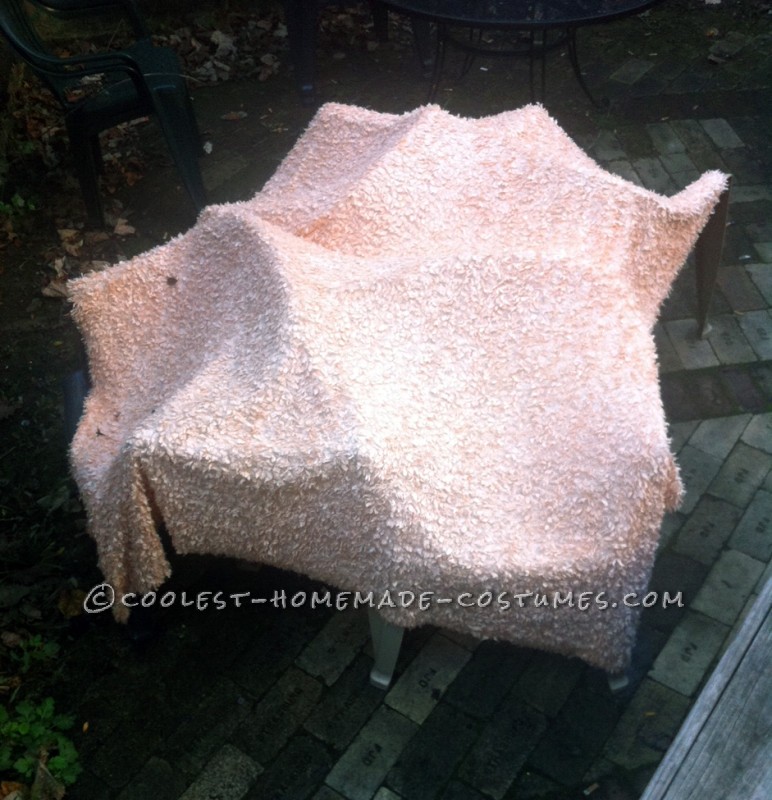 The peach monster in my backyard

And the construction begins!

Now that my fabric fiasco was behind me, it was time to start putting the costume together. Using the fleece blanket, I sewed a pair of pants, 4 hands (2 gloves and 2 to be stuffed), 2 feet (shoe covers), and the head.

To create the head, I used a baseball cap as my base and built off of that, pinning and trimming the fabric as I went along. I left extra material at the bottom so that it could be tucked into the collar of the t-shirt to look like his neck. To create the mouthpiece, I cut out the shape from a thick piece of foam and then covered it in fabric with fabric glue and straight pins. I then connected the mouthpiece and the baseball cap by 2 strips of foam on either side of my face, sitting just in front of my ears (this was also covered in fabric). I then sewed black mesh to the mouthpiece and visor of the cap, which further reinforced the connection between the two and gave Pepe that fixed, open mouth smile!

I bought 2 sweatshirts so that I could remove the sleeves from one, and sew them onto the other to create the 4 arms. I stuffed the top 2 sleeves with foam and then sewed the stuffed hands to the end.

For the finishing details: the hair was made of out red pipe cleaners wrapped in red feathers. They were able to pierce the fabric on top and be reinforced with a little hot glue. The feelers were made from wrapped floral arrangement wire and attached the same way as the pipe cleaners. The eyes were made from 2 light foam balls wrapped in white fabric and drawn on with a marker, (they were then glued and sewn into place). A pink piece of craft foam was glued to the black mesh for the tongue. I folded a piece of white fabric and glued it to the edge of the mouthpiece to create his single tooth. And the final step was attaching floral arrangement wire (twisted together for more strength) to the top set of hands so that I could hold them like puppet sticks with my hands and control the top two like a puppet. 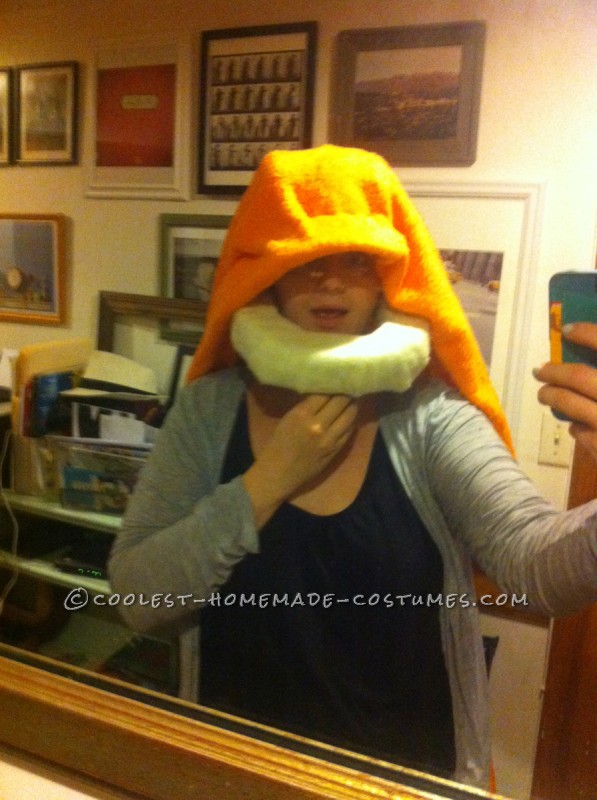 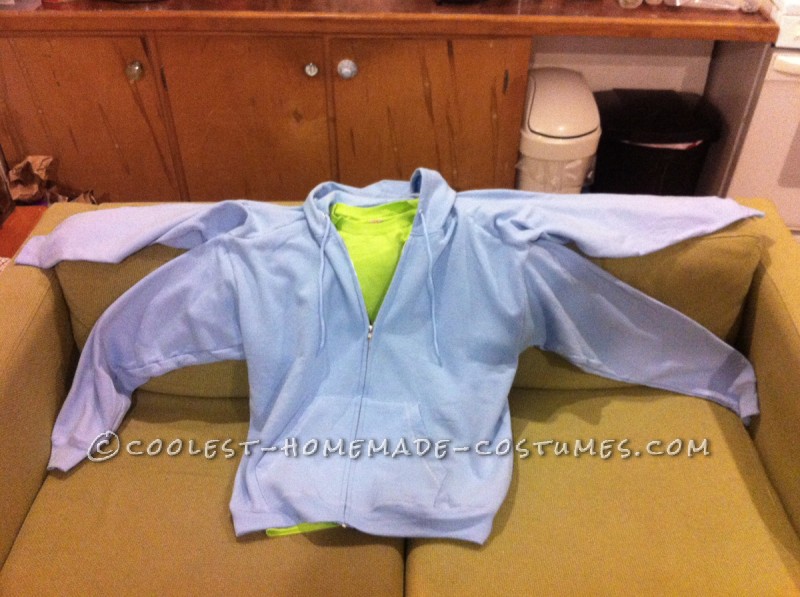 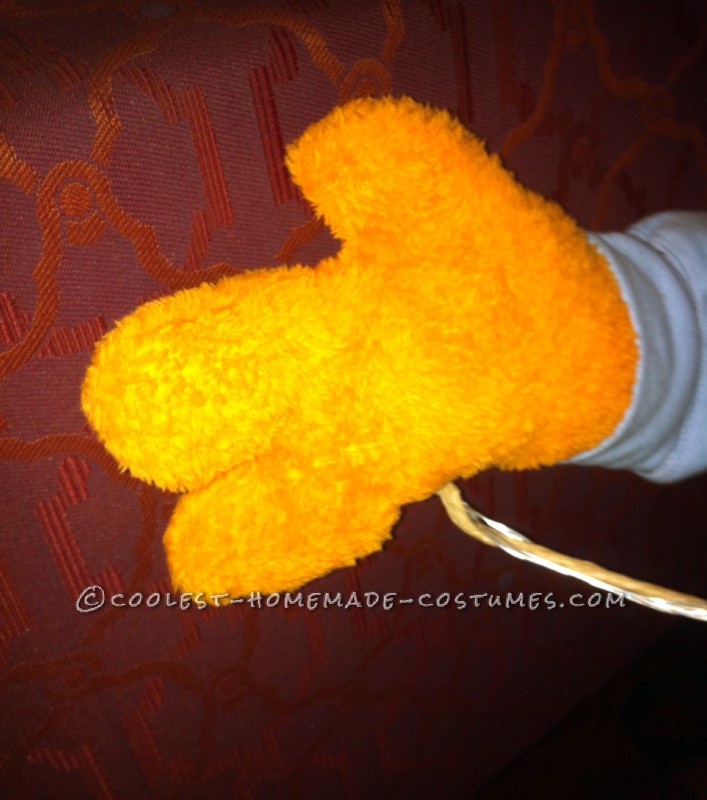 Put it all together and party!

Suffice it to say, I had some complications in creating this costume and the downside to actually wearing the costume was that it was a bit too warm. I couldn’t keep the head on all night. But all in all, I love the way the costume came out, it was so fun to work on and see it come to life, it got an amazing response from friends and strangers and it looks awesome in pictures. I’d say Muppet Halloween was a success! 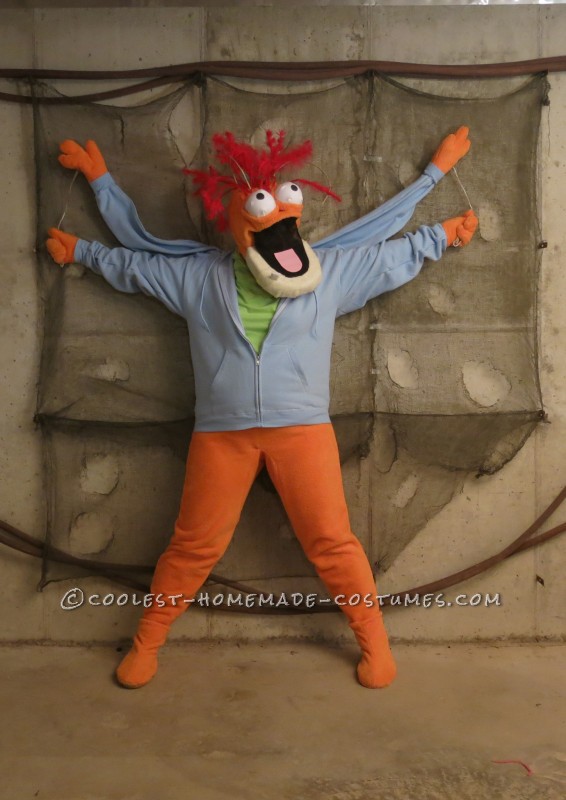 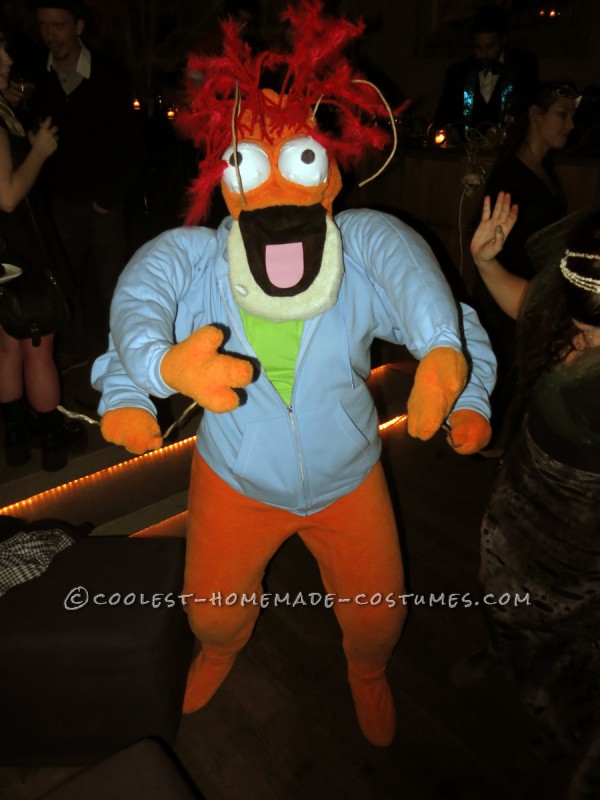