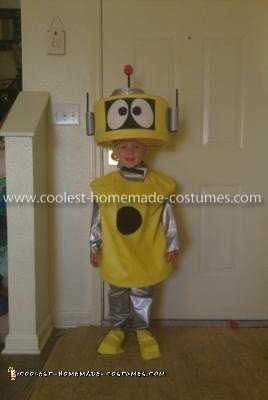 For Halloween my son decided he wanted to be Plex from Yo Gabba Gabba. I like to homemake his costumes every year and this homemade Plex costume was going to prove to be a lot of work!

First we went to a fabric store and scoured the bargain bins. Finally I found a yellow pleather type material, like you would use for a picnic table and a pleather type silver material. Next I started checking every yard sale and thrift store I could for bits and pieces to make his head and body. I finally settled on a cheap pair of sweat pants and sweatshirt, a couple of wire hangers, a hat box and a beanie and just a few more odds and ends.

To make his head I took the hat box and cut a hole in the bottom a little bigger than my sons head, then with thick thread and needle I sewed the beanie in so that it would balance on top of his head. Next I took some of the yellow pleather material and a hot glue gun and covered the whole hat box. For Plexs’ eyes I used some cheap pieces of felt. For the disks on top of his head I cut down some styrofoam I found in the bottom of a box in the garage then covered them with some of the silver material and hot glued into place.

His ears were toiled paper rolls covered in silver material as well and glued into place and his black “antennas” were a dowel rod cut and painted black and lastly the red ball on top of his head was a clown nose.

For his arms and legs I popped the arms and part of the legs off the sweat pants and top and used them as a template to make new arms and legs out of the silver fabric, which I then attached where the originals were. Next I took the wire hangers apart and bent them into two circles, using electrical tape to cover the place they were twisted so they didn’t scratch. I measured out the yellow material and sewed it onto the hangers so I wound up with a cylinder, then I just cut out arm holes.

I finished off with a round black piece of felt in the center. The feet coverings was scrap yellow material that I just cut and glued into the proper shape and attached to his shoes.

To put it all together he put on his modified sweat suit, the body, the body just slipped over his head and his arms went through the holes. Lastly the head just sat on top! We got lots of compliments and he had a great night showing off!