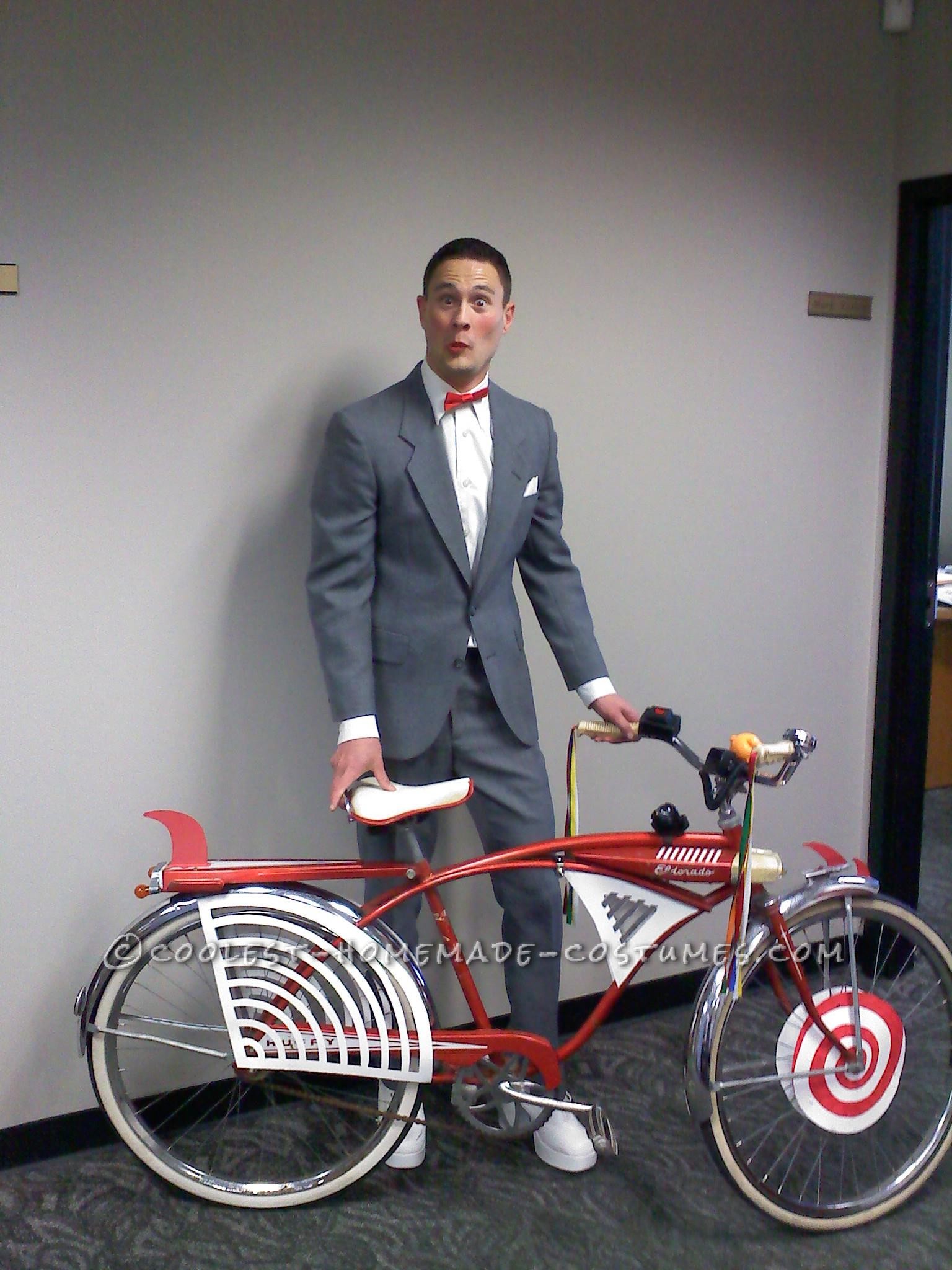 Pee-Wee Herman was an idea I had for Halloween in 2011. I was trying to think of something not only fun and clever, but also something that I could also pull off resembling. I’m pretty creative and go all out in anything I do, and Halloween is a perfect opportunity! Wasn’t planning on entering into any contests, but won first place at a work party and thought maybe I could do something with this! In total, won 1st place in all of 5 different contests I entered over Halloween, winning $1250 in cash, 2 KU football tickets, and 2 round-trip AMTRAK tickets to take to LA!

One of the evenings out I asked a DJ at a bar to play the “Tequila” song and I did the Pee-Wee Herman dance on top of the bar where there is a video posted on YouTube; was so much fun! I was surprised to see how much it made an impression on people! People thought I resembled Pee-Wee so much that it was creepy! They thought it was hands down the best costume they have ever seen with the bike and dancing performance. Everyone wanted a picture! Even after Halloween I overheard complete strangers talking about the “Pee-Wee guy”, and people still talk to me about it today.

In putting the costume together I first found a light grey suit one-size too small for $10 at a Goodwill thrift store and then tailored it a little more to fit even tighter! I also found a little boy’s red bow-tie and some white platform shoes online for about $40 total with already having a tight white dress shirt and white pocket square. I also cut my hair and styled and geld it as Pee-Wee does and put on some red blush and lipstick. To top off the costume, I added a prop by making my own Pee-Wee Herman bicycle and learning and performing the dance to the “Tequila” song as Pee-Wee danced on top of the motorcycle bar in the movie, “Pee-Wee’s Big Adventure”.

For the tiger CB radio, I bought a plastic tiger toy and broke off the head and screwed and hose-clamped it to the handlebars and attached a CB radio microphone to it. Made and added an electronic switch box, red light bulbs as taillights, attached a rocker switch, a compass, a bike bell, and made some handlebar streamers with some different colored ribbon.

The costume was an extreme success and definitely made a return on my investment! The difficult thing now is how to come up with idea each year to top it! Please vote for me! Thanks!
http://youtu.be/7kKgXtEsrK4 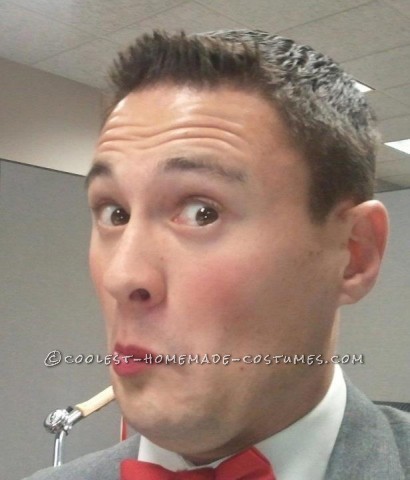 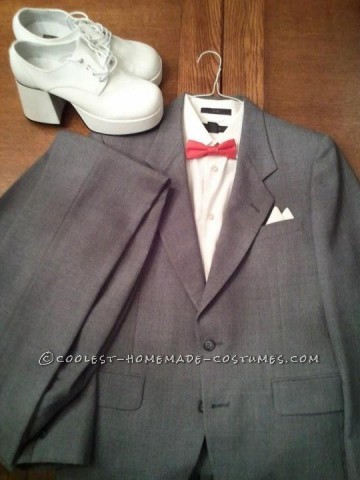 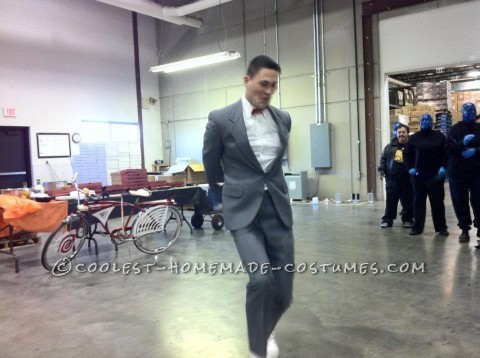 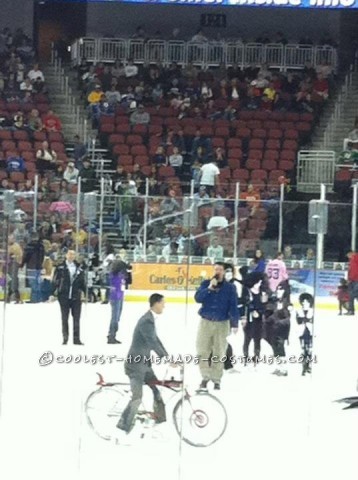 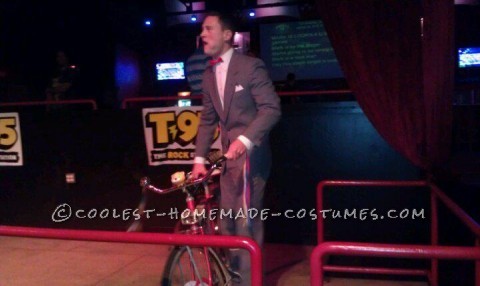 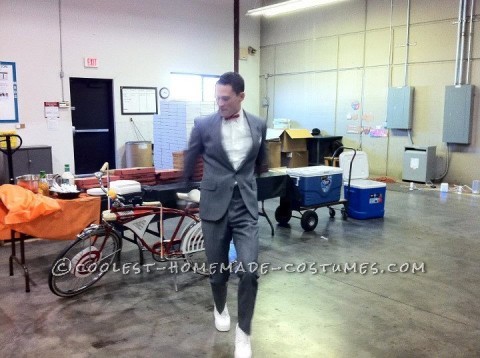 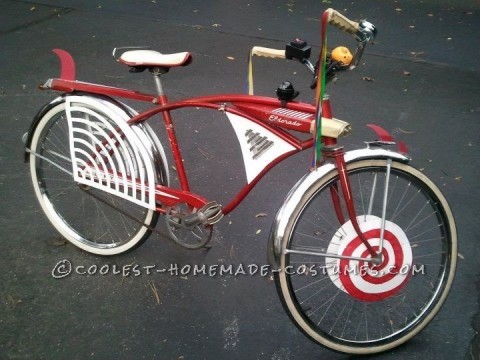 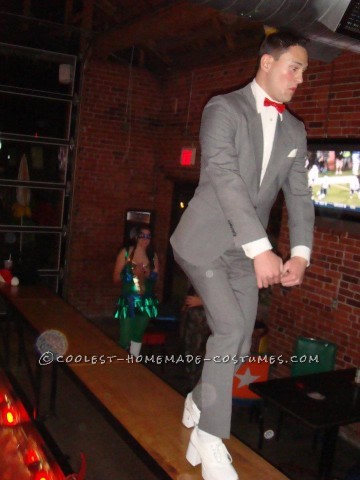 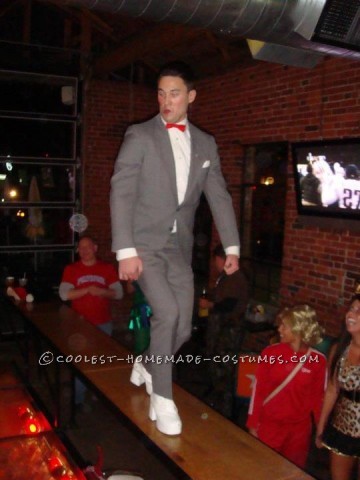 Bringing Pee Wee Back for Halloween

2 thoughts on “Best Pee-Wee Herman Resemblance Ever! Not a Costume to Say!”