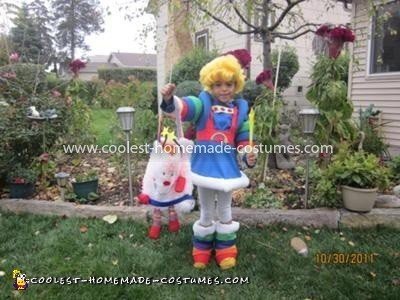 This Rainbow Brite Costume was a very fun and rather easy costume to put together. It was inspired of course from my own childhood favorite character Rainbow Brite! I made the top as a long sleeve shirt and sewed in each color ring after I finished the sleeves. I did have part of a pattern for the shirt and skirt I was able to get online.

The skirt was sewn together per the pattern. you could use a blue dress and add the accents on the front to complete the look. The blue stuffed sleeves and white stuffed hem can be made separate and sewn on or even glued on with a glue gun.

For the moon boots I used a pair of snow boots and glued on the different colored rings. I stuffed each one as I went along and added the orange boot strap with yellow star at the end.

Rainbow Brite of course wouldn’t be complete without her favorite Sprite Twink! I made this bag out of her trick o treating bag from last year because it was rounded rather than square which works better for Twink. I purchased the furry fabric at my local fabric store and bought some rainbow ribbon for the handle. Since the handle was black I used the left over color scraps from the sleeves and boots to create the same rainbow pattern on the underside of the handle.

I sketched out the hands and feet and stuffed them, I then sewed them shut and glued them to the bag. I used the same rainbow ribbon to cover his legs. I cut the face out from the left over furry fabric and glued it to the bag with the wrong side up. I drew in the eyes and mouth. Used red felt for the nose and smeared in lipstick for the rosy cheeks.

Since I didn’t have black pipe cleaners I covered my green ones with black fabric and made some yellow stars from card stock. Glued them onto the pipe cleaners for antennas. I made the belt with left over blue fabric and his red pouch with the red felt. Stuffed it and glued it on the belt.

The wand we were lucky enough to find at the Dollar Store. It was a glow stick which came in very handy during trick or treating. I purchased a Cinderella wig and took the bun out and made a ponytail in the back like Rainbow Brite has. Took out the light blue ribbon and buttons used on the Cinderella wig and used a rainbow ribbon instead.

She was the talk of the town in this Rainbow Brite Costume! Many kids didn’t recognize her but the mom’s sure knew who she was, it brought them back to their own childhood. This took me a weekend to make.