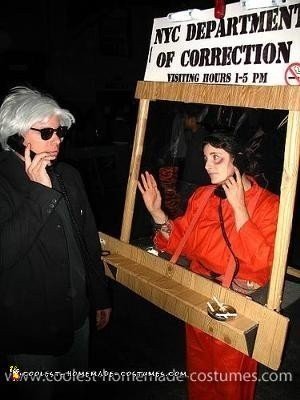 For this Prisoner in a Visiting Booth Costume I made a two sided “prison visiting booth” out of foam core which I covered with cheesy wood paneling contact paper and a clear plastic film to recreate the glass between the two sides of the “visiting booth.”

I attached two identical black phone handsets with old timey curly cords on either side of the booth, hanging when not in use in “U” brackets (the top of the receivers hung off of, the brackets).

The top of the Prisoner in a Visiting Booth Costume had a large sign that said “NYC Department Of Correction, Visiting Hours 1-5 PM” with a small “no smoking” symbol in the corner.

On the outside of the costume, the visiting booth had a built-in ledge on which sat a cigarette butt-filled ashtray with one of the cigarettes permanently “lit” (using a tiny light bulb covered with a dab of white glue with black, yellow and orange glitter on the tip to give it that twinkly “lit” appearance… the battery and switch for light bulb were hidden under the ledge/shelf, all the cigarettes and butts and ashes were glued and then shellacked with spray to keep them in place).

Next to the phone receiver on the outside, there was a tiny sign that says “Lit when in use” with a little blinking light next to the phone hook. On the prisoner side of the visiting booth, I wore the costume with “bucket style” straps that crisscrossed in the back.

I wore an orange prisoner jumpsuit, gave myself a black eye, had handcuffs on one wrist an a few strategically placed fake tattoos.

It was very interactive – the “audience” became my accomplice (“What did you do with the money?”), my dad (“Daddy, I am so sorry I dragged our family name into the mud… can you ever forgive me?”), my child (“Honey, is that YOU? It’s your mommy, remember me?! You got so BIG! Are you being good? Are you brushing your teeth? Doing your homework?”), etc…

When I wasn’t talking to someone at the booth, I would silently mouth the words “Pick up the phone!” while pointing to the receiver on the other side of the glass until they picked it up to talk to me – then I would converse with them using a normal voice… as if they couldn’t hear you until they picked up their handset.

Overall, this Prisoner in a Visiting Booth Costume is a great interactive costume with endless possibilities!

3 thoughts on “Coolest Prisoner in a Visiting Booth Costume”