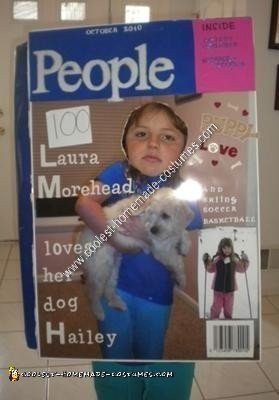 My daughter Laura age 7 had been telling me for months that she wants to be a magazine for Halloween. We have been making costumes for the past couple of years. When it got closer to Halloween I tried discouraging her from the homemade magazine cover Halloween costume idea. I told her “I don’t know how to make a magazine”. She told me to print out some pictures of her and her new dog Hailey and give her some foam board and she will do it. She produced a rough draft of the front and back which was a story all about her and her dog Hailey.

I then started looking at Magazine covers. We decided People magazine was the closest match to her idea. I took the pictures she picked out to Walgreen and had posters made of them. We glued (with glue sticks) the posters to foam board. I cut out a hole where her head was on the poster for her to fit her own head in. We laid out the front cover like a real People magazine about a famous person. We included a bar code where one exists on the real magazine, the date, and some inside stories.

We used stick-on letters for all the letters except the word “People”. I could not find lower case letters large enough in any craft store. I printed out large lower case letters on the computer, traced them on felt paper and cut them out (aside: The number 100 appears on the front in one of the pictures because it is the number placed there for a contest).

My biggest challenge was how to connect the front and back covers. To make it look like a magazine opening up, I cut 2 pieces of foam board different widths for the sides. The smaller width board was the bound side of a magazine and the larger width board was the open pages. I decided to use brackets to attach the 4 pieces. However, because the sides were not equal widths (that is the magazine looks like the pages are being flipped through and it is not a 90 degree box), 90 degree brackets would not work for all corners. I bent one set of brackets to be less than 90 degrees and one set of brackets to be greater than 90 degrees. I used foam mounting tape to attach the brackets (the last picture I included shows the inside of the box where you can hopefully see the brackets).

We covered one side with curved paper to represent the bound side of the magazine. To make the other side look like pages of a magazine, we cut strips of different colored poster board, glued cut out pictures and words from magazines to them, and foam taped them to the side board. The effect it portrayed of the pages of a magazine and the comments we received from viewers of its effect was more than we had expected.

Laura was able to hold the magazine up from the bottom, but we decided to attach bungee cords to the bottom around her shoulders to help her support the box without having to hold it. The bungee cords I was able to find were Twist N’ Stay Ties at Kmart. You should be able to see the ties on the picture I included of the inside of the costume. I used packaging tape to tape the ties to the inside at the appropriate height for Laura.

The costume is very light and Laura was able to walk around with no problem and without getting tired for school and town parades. Laura wore the same clothes she is wearing on the cover and kept her arms positioned inside as if she is holding Hailey. The fun of wearing a homemade costume is worth the effort! 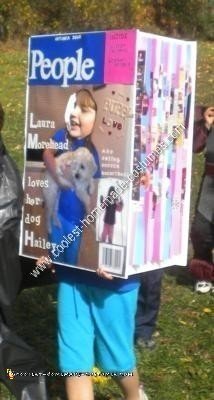 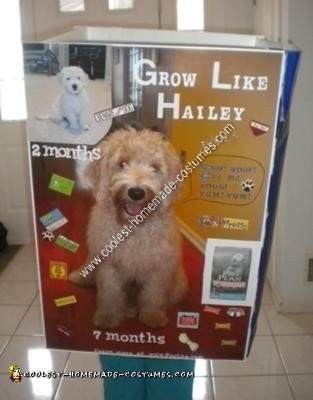 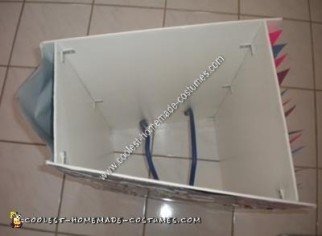