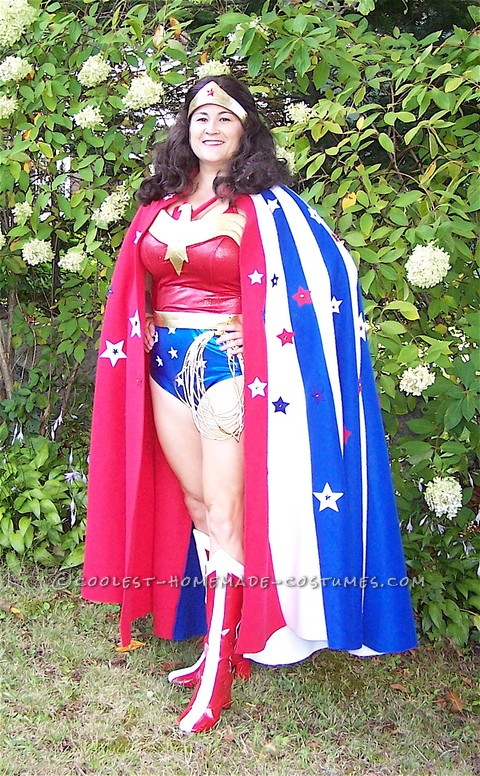 Here is my head-to-toe rundown of how I made my *NO SEW Wonder Woman costume.  (*no machine sewing, but some hand stitching. The hand stitching could easily be replaced by using Liquid Stitch.)

I hummed and  hawed about buying the wig, but it definitely adds to the look of the costume, especially since I have very un-Wonder Womanly baby fine, golden hair. The wig was purchased on-line and is called “Secret Wishes” Wonder Woman wig. It is of good quality for a costume accessory wig. Inside there is an elastic to help with sizing for smaller heads like my own.

Tiara: I made a tiara template out of poster board, then traced it onto a piece of adhesive-backed felt. I carefully applied a piece of gold lamé fabic to the sticky felt, cut around it leaving enough to wrap over the felt and glue to the back. The whole backside of the tiara was then covered with another piece of adhesive felt to cover the rough edges and add comfort. Velcro glued onto the ends provides the method of attachment around back  (the tiara also helps hold the wig on).  One applique star adorns the front of the tiara. I covered the star in spray glue, then sprinkled very fine powder red glitter onto it, and stitched a small, red acrylic star onto the very center. I glued the star onto tiara  (masked off the star shape with painters tape so that excess glue would not seep onto the gold, and removed when dry).

Red Satin Top:  I purchased a Leo’s Red Satin Stretch basic ballet leotard, with sweetheart neckline from a discount dance wear company online for fairly cheap money. (~$25 +/- ) Unfortunately, this particular line of leotard has been discontinued, so don’t bother looking for it.  I needed extra support, so to cover the elastic straps of the bra I had sewn into the costume, I added a satin halter strap. (halter strap made out of an old satin belt that came with one of those frilly Valentine’s day outfits).

I found a comic book version of the eagle that I liked the best, printed it out and used it to draw my template. Each piece of the eagle was assembled in the same manner as the tiara. The five separate pieces were then butted up against each other to give a quilted effect and glued onto a matching piece of red satin fabric. I folded the red satin around to the backside of the eagle to hide the raw edge and glued it in place. I left about 1/8 of an inch of red satin showing around the perimeter of the eagle and hand-stitched it onto the front of the red ballet top. 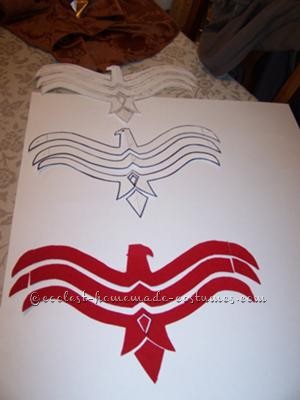 Royal Blue Metallic cheer leading briefs from online dance wear company.  White stars purchased from JoAnn Fabrics and hand sewn onto briefs. (FYI: Can’t iron the metallic fabric!!) I suppose Liquid Stitch would have worked also, but I wanted to be able to move my stars if I wasn’t happy with their location after the fact.

I purchased some inexpensive red lycra booties that go over ice skates. I slipped them on over the running sneakers, glued some heavy duty black vinyl to the bottom to create a sole, and glued soft white felt up the center for the boot stripe. I made a pair of shin guards, for lack of a better term, out of red vinyl to create the boot tops. The front has more of that heavy duty craft felt to create stripes. I punctured the back side with a hot awl to make eyelets. They lace up the back with a matching red cord.

A simple length of gold vinyl trim. I intend to made a more elaborate belt that ties in with the eagle better. Lasso: Gold metallic cording. Both from same fabric store. Lasso Hook: Flat piece of metal from my cellar, shaped into a hook and covered in the gold that I made the belt out.

Bracelets: Two layers of aluminum flashing from hardware store. Each layer was adhered to the other via Manco Indoor/Outdoor Double Sided carpet tape  (one layer of flashing was too flimsy). Carefully cut metal with tin snips, stick layers together, then file down the rough edges and shape around wrists. It helps to use a large wooden dowel or other round object to start the shaping process, and remember to taper as you go. Cuffs are lined with adhesive fun foam for comfort and adorned with red acrylic star.(Superglue…holding so far).

Boots: Well, when I found these babies online, I couldn’t pass them up.  They are Go Go boots made by Funtasma (GoGo305RW.) If you have thin calves, you’ll be all set. They are quite narrow on the lower leg, and though they say stretch, I read lots of reviews by people who had to return them. I am also making a pair of Wonder Woman sneaker/red vinyl shin covers to wear in a 4th of July parade.  I will be hula hoop dancing in the costume and boots are not conducive to my stability. Golden Hoop of Truth pending.

First off, I chose to make my cape out of a light weight fleece, not the proper satin, for three reasons. 1) this is a practice run before I do it in the satin; 2) The fabric is super easy to work with, since it doesn’t fray (and doesn’t required finishing all of the outside edges; and 3) I will be running a 5K in the costume, in chilly Autumn in Boston, just before Halloween, and this will act as a warm cloak for pre and post race…

I had a little knowledge as to the basic shape I needed to work with, but had never actually made a cape before. I cut up several lawn / leaf bags, laid them out on my patio, taped them together to made a giant piece of paper and proceeded to make my own pattern from that. I measured the distance from the nape of my neck to the ground to estimate how long the cape would need to be, plus extra for hemming. I tied a marker to a string, and anchored the string down where my neck would be. The length of the string was equal to the “nape to floor” length. I then swung a huge arc using the string/marker like a giant compass to create a huge 3/4 circle. (Think Pac-Man with his mouth wide open, pointing upwards.) I divided up the the shape into two halves….the “Red Side” and the “Stripe Side”. The Red Side was split into two large equal sections. The Stripe Side” was split into multiple wedges of varying sizes. The three blue/white/blue wedges closest to the red side are much wider and take up half of the striped side. The remainder of the striped side gets split into 6 narrower wedges of blue, white and red. Once I got that all figured out, I cut out the different sized wedge shapes that I needed and matched them up with the the corresponding fabric color. Without going into gory detail, I stitched all of the wedges together, cut a semi-circular opening for the neck hole, hemmed the neck opening and threaded a piece of long fleece through it for the tie. I put it on and shortened the bottom accordingly…trimming a few inches off of it, testing it out, making adjustments as needed. When I was satisfied with the length, it came time to “bling it out” with stars, sequins and beads. Instead of buying expensive applique stars for a fleece cape, I opted to pick up $1.99 sheets of heavy duty craft felt. I soaked each piece of felt in a little soapy water to remove the sizing and make them a little less stiff. I found different sized stars to trace onto the felt, and cut out. Each star was then adorned in the center with a large sequin and a gold seed bead similar to the actual T.V. show cape…(I put an acrylic star in the center the biggest ones…the sequins looked too small on them.) Once they were all ready, I carefully glued them in place with Fabri-Tac. I did not try to follow along with the actual cape for positioning, but did use it as a general guideline. An incredibly help website for the making of the cape is the “Wonder Woman Museum”, specifically “the Mannequin Project” page. Lots of photos!! When I get brave again, I will venture forth and try to do this in satin.

I performed a “hoop dance” routine in a  local 4th of July parade, dressed in the Wonder Woman costume. I had to nix the Golden Lasso for my Golden Hoop of Truth (which I also made myself…irrigation  tubing, gaffer’s tape and gold spray paint.) I had to make a set of boots specifically for the parade dancing/hooping. I would have killed myself in the heels. So the boots are flat bottomed, rubber soled, faux red boots and I painted the stripes on. Lastly I had to switch out the top with a second one. I made it the same way, but used a body suit that is red metallic lycra, instead of half satin….something that could better move with my body.

I picked out music and choreographed the routine. Unfortunately, the routine is designed to be viewed specifically from the sidewalk, so you totally miss the optical effects of the cool tricks.. (My only video was taken by my husband who was behind me in the parade pushing the cart with my water, towel and music.  He was being a good sport dressed as Steve Trevor.) Aside from the wrong angle, the video is kind of fun. You get to be in the parade with me, and hear the crowd cheering, etc…