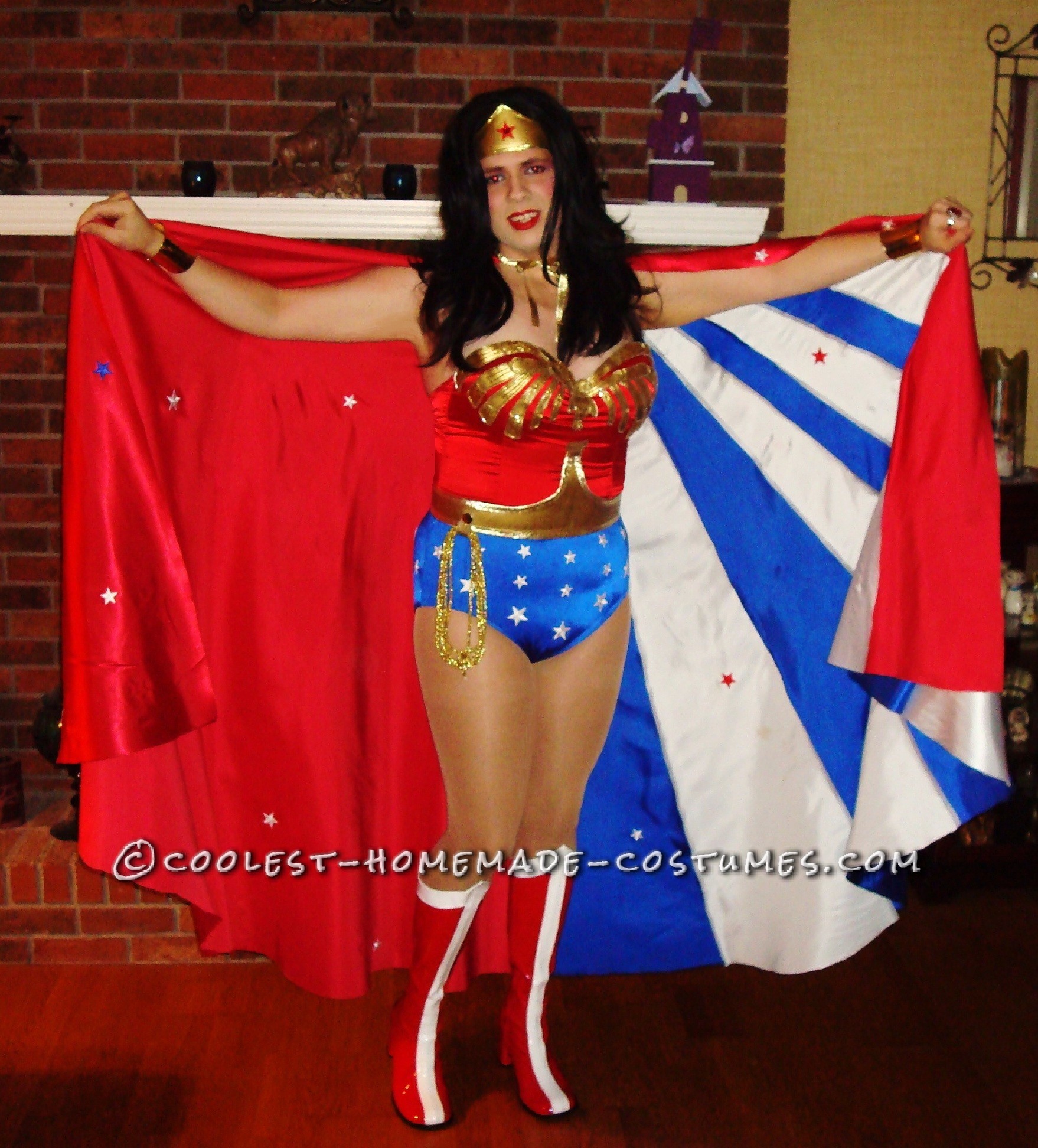 I’ve always wanted to be Wonder Woman for Halloween. I told myself if I could get to my goal weight which would mean loosing 80lbs, I could be Wonder Woman! It took me over a year to loose the weight but soon as I did I began my quest for a Wonder Woman costume that would be acceptable to me as I am very picky. Most of the costumes that were higher quality were close to $300 but even those failed to satisfy me. In fact the only one I found available on the market that made me drool was $4,500 and was a perfect replica. Well that was just out of the question for me so I decided if I could loose 80lbs I could certainly make a costume.

I spent hours in various fabric stores looking for perfect materials. I started with the bottoms. I purchased bathing suit quality Lycra fabric in in a royal/cobalt blue to make the bottoms with. Then I purchased white star appliques in 1 and 1.5 inch sizes, though I couldn’t iron them onto the Lycra because it may burn the fabric. I sewed every star on by hand. When they were finished, I was amazed at how well they turned out and I was motivated to start on the top.

I sewed red satin over a sturdy bra so the top would have built in cups. Then came the hard part, the eagle on the chest. I hand drew the eagle many many times before I got the design just perfect for my chest size. I bought a roll of shelf liner vinyl, spray painted it metallic gold and cut out all my pieces of the eagle. I then used bugle beads and beaded all the pieces of the eagle before I put it together and sewed it to the top. This took me nearly 20 hours to sew every bead in place!

I made the belt, tiara, and cuffs out of the same painted vinyl. The belt and cuffs have Velcro for their closures and the tiara has elastic. I glued the gold lace trim border to the tiara and cuffs along with the red stars and red jewels. On the belt I used gold edging to give it a more finished look. I added a button and a elastic loop to the belt to hope the magic lasso.

To make the cape, which was very time consuming but fairly easy, I started by taping a bunch of old newspapers together on the floor to make a pattern.  Since the cape is so large I just drew out half of the cape which was one fourth of a huge circle.  I made my “one fourth pie slice shape to be 62 inches from inner point (neck area) to edge point ( end of cape).  Half of the cape is all red so that half was very easy!  The other half consists of 9 different sections, 4 blue, 4 white and 1 red.   Judging from pictures of the wonder woman cape, I had to guess at the proportions of the colors.  I folded my one fourth circle pattern in half (to make 1/8) circle wedge and placed it over the blue fabric and cut out the wedge, which would be then cut in 4 pieces.  I decided to first use a cloth measuring tape to divide the blue wedge into 3 equal sections, and cut them out and then took one of those and cut it in half leaving me with two large and two small blue wedges.

I then put the 1/8 wedge pattern  over the white cloth and cut it out.  I took one of the large blue wedges and cut out one large white wedge and then I divided the remaining white into three equal sections using a cloth measuring tape, giving me 4 white wedges total.

For the red wedge, i just took one of the three smaller white wedges and copied it.  I got some of that very strong iron on bonding stuff, (like stitch witchery), and put all the pieces together very carefully.

I then had to make my neckline in the cape, I used a 12 inch dinner plate to draw out a perfect circle and folded that in half giving me half circle and pinned it in the center to cut out the neck line leaving me with a 56 inche from neck to floor cape length.  I used gold edging to hem the neckline leaving about a foot extra on each end to have tie strings.

I bought iron red, blue and white stars and added them to the cape and it turned out beautiful!  I used 3 yards of red satin and 1.5 yards of blue and 1.5 yards of white to make this cape, I have about 30 stars on the cape which I will probably add more later on but it only cost me about $30 to make and definitely was a nice finish to the costume.

I also upgraded my boots this year to a style with a white stripe ( pleaser fantasma brand ).   Now my wonder woman costume is complete and I adore it!  I hope you all find this helpful if you wish to make your own wonder woman costume/cape.  I have seen the capes like this go for hundreds of dollars and you can easily make this yourself with a little creativity and patience!

I ended up having about 50 hours of work in this costume but it turned out just awesome, at least I think so. Total cost was about $70. (excluding the boots which I purchased).  I won two different costume contests the weekend I wore it! 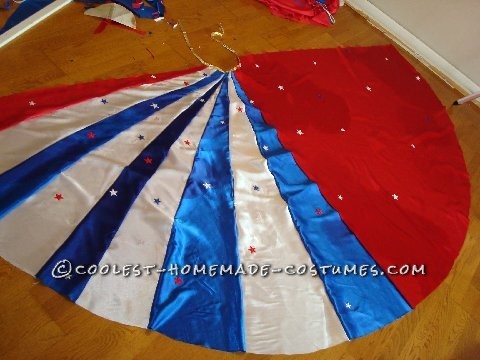 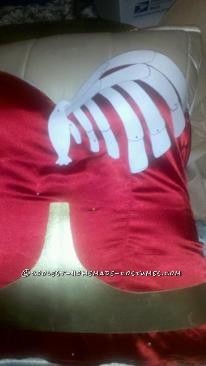 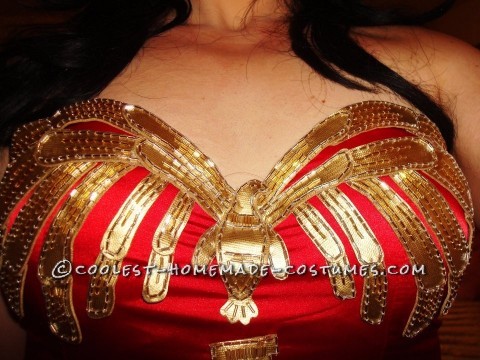 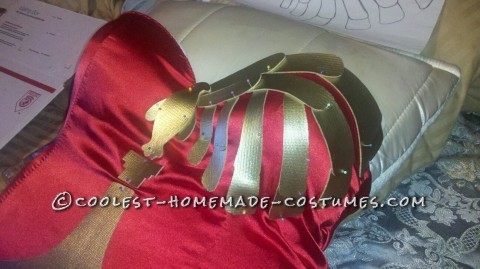 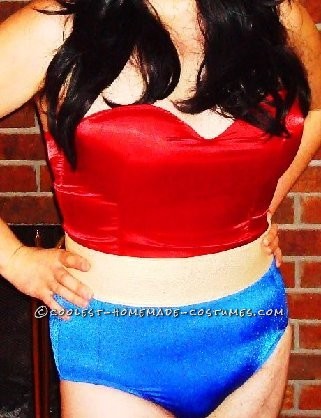 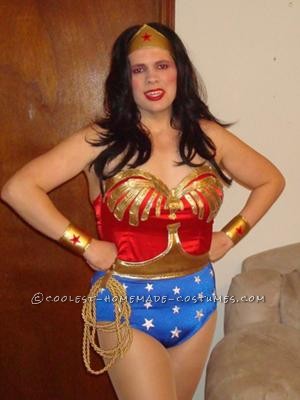 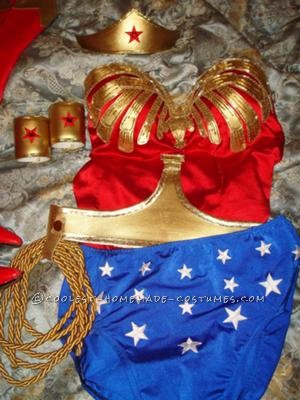 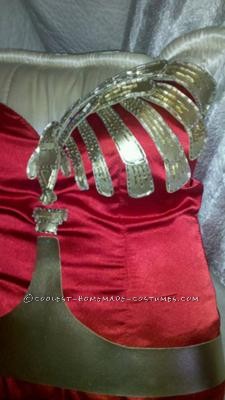 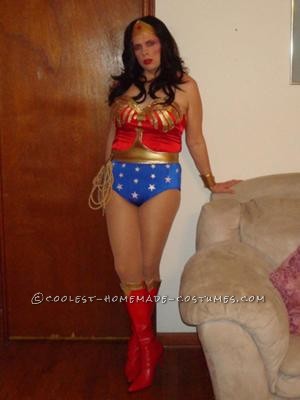