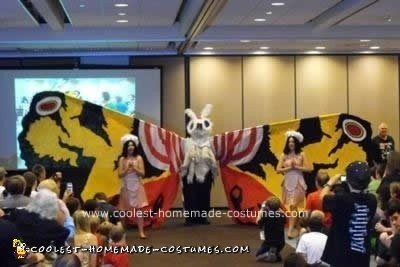 This Mothra Costume is a 12 ft wing span on each side of body, total 24 ft. Painted canvas wings, fake fur material body. Head plastic formed, head mounted to bike helmet, feather antenne. I am a 6’2″ man inside body. Wings can move in flying motion. Included are the 2 mothra faries from the Mothra and Godzilla movies.

I have always been a big monster movie fan. The kind of monsters called KAIJU. Japanese monsters with a man inside the suit. Godzilla was my first favorite monster when I was 8 years old. There are many monsters from Japan but, Mothra was the first female monster to be created. She hatched from her egg with the help of the 2 mothra twins (later called fairies). They sang to her to encourage her to transform from a larva catterpillar to the magnificent giant flying moth. Mothra has a special song that the fairies sing to her asking her to protect and save the earth. Mothra has always been a favorite of children.