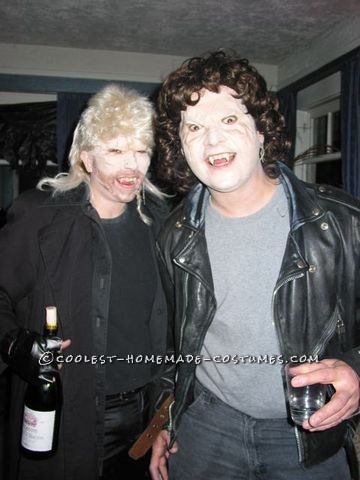 Originally we promoted our large group of friends to attend a local Halloween party as the whole entourage of characters from the classic 1987 ‘s vampire flick, The Lost Boys.  Although our friends declined, my husband and I decided to go as the two main characters, Michael and David.  We sourced the outfits from goodwill 1980 ‘s clothing and a local costume shop.  The most difficult part of the costume was having my hairdresser customize the cheap costume wigs so they looked a little believable.  It took about 3 hours to do our makeup and included creating custom vampire teeth to fit each of us as well as a facial appliance called a “woochie ” to emphasize the brow line of the characters as they appear in “vampire ” mode.  We opted out of custom contacts, but would be spectacular finishing addition to the look.

The most fun was for me (a women) to be dressed as such a powerful male character. Most of my girlfriends could not believe the transformation, as Keifer ‘s iconic role is pretty hot. I was a little lonely because I was so scary and so hot and so transformed my friends had a difficult time not seeing “me ” and could only see “David “.   I added a sock “package ” and massive shoulder pads to make my body look more masculine.  I carried around a bottle of red wine as a prop and voila – “Initiation ‘s over, Michael. Time to join the club! ” 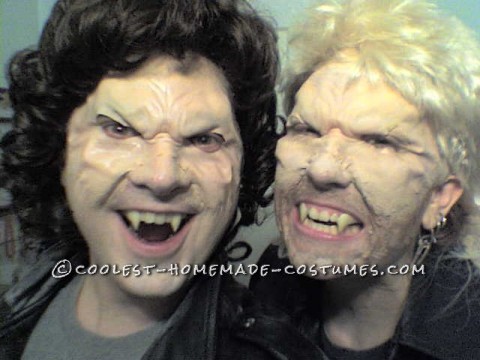 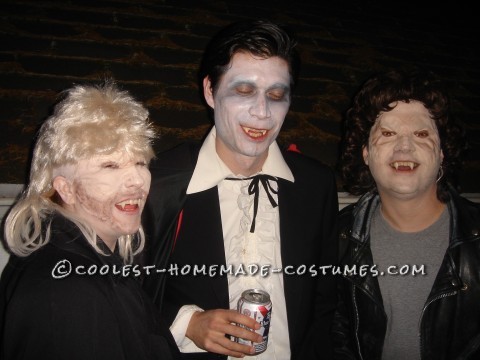