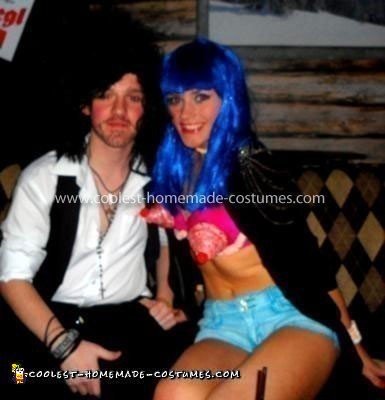 I decided to create a Katy Perry costume from scratch last year for Halloween. It took a lot of effort, but the end result was fantastic and I received so much praise from everyone!

The bra – This was the hardest part to the costume. To make the cupcakes I used filmo (a putty substance that can be hardened in the oven) and rolled two identical sausage shapes which were layered to create a spiral shape. At the base of the spirals I made 3 holes (top, left side, right side) so that they could be attached easier to the bra. Next i used multi-coloured filmo, and shaped it into small flakes to look like sprinkles, then applied to the spiral shapes. I then used red filmo to create two cherries and placed them on the top. The cupcakes were then put into the oven to bake.

The shorts – I used an old pair of shorts, and cut the legs to shorten them. I then used blue dye to create a blue hint, and superglue to attach blue sequins to the rear pockets to give it more sparkle.

Shoes – A pair of black killer heels, in which I glued marshmallows to the straps for that candy look.

The final touch! Complete the look with a friend as Russell Brand! :D 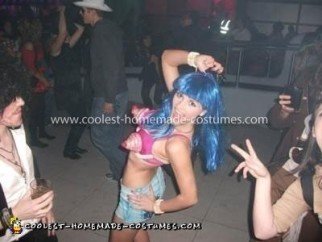