I began piecing together this homemade Britney Spears Halloween costume last year. I first began the long tedious process of gathering the appropriate vintage jewelry needed for this costume. I used 3 gold-tone vintage belts and added different matching vintage brooches and earrings and hot glued them to the belts. I then machine sewed the chiffon scarves seen in these pictures, I also used dyed pheasant feathers.

After that I had to have a pattern made for me out of rice paper for the boy shorts, after I found an appropriate pattern for my shorts my next quest was for the perfect fabric. I finally settled on a navy colored spandex/lycra blend that was purchased from a local store called Fields Fabrics. After the shorts were constructed appropriately I then had to order my fabric paint and a quilting stencil off from eBay, I used tulip brand fabric paint, a quilting stencil and a pounce pad to make it.

After Stenciling out the butterfly I painted it and let it dry for a few hours, went over it a couple more times and when it was complete I wiped away the excess chalk from the stencil and pouncepad. After finishing the shorts I then needed to find a green fabric for the top,I finally settled on a green sequined cotton blend and had to purchase a bra from the store. I then cut the straps off the bra and proceeded to hand sew the fabric onto the cups.

Along the side straps of the bra I machine sewed them onto the straps for durability.I also had to spend 2 hours sewing and turning inside out the top bra straps and the side strap extensions along with the two pieces in the front that connect in the back and make a bow.

After completing the bandeau/bra top I then bought some glass beads and sequins from a store named Michaels that coordinated with the colors of paint I used on the shorts. I then applied them to the front middle of the top and scattered all over the shorts (as you can see in the pictures).

My inspiration for this homemade Britney Spears Halloween costume obviously came from Britney Spears’s 2001 VMA performance outfit, I have been dreaming about recreating and wearing this costume since I was about 13 and to have actually have been able to recreate and wear this costume has been a dream come true for me. I spent ALOT of time and even purchased a brand new sewing machine to make it. 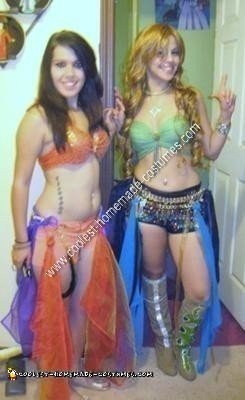 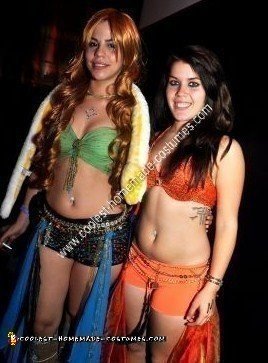 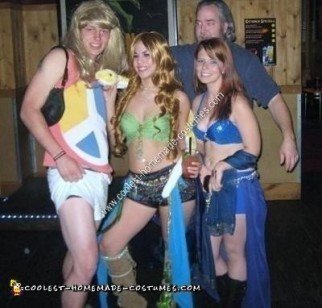