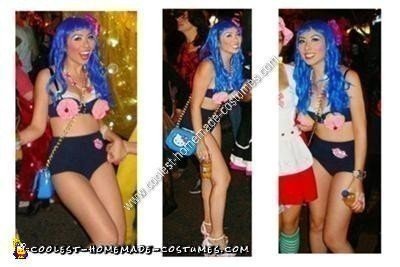 Inspired by Katy Perry’s “California Gurls” music video, I did my own version of the cupcake bustier top outfit Katy Perry wore. I made the bustier, the high-waisted shorts, candy necklace, hair bow piece, shoes, and finished the costume off with some fun jewelry I had to accessorize the outfit.

How to make the Homemade Katy Perry’s California Gurls Costume:

1. Cupcake Bustier:
I used an old bra I didn’t care much for and hot glued on the pieces to the bra. I first glued 2 pieces of 3” inches of lace on the top part of the bra. To put together the cupcake for the bra, I used one medium-sized Styrofoam ball and sliced it into two equal parts. In order to have the semi-sphere to “cup” around the bra, I used a spoon to scoop out a dome so that it can easily be glued onto the bra. I then painted the Styrofoam with a yellow-beige-cake-batter color with acrylic paint. While the acrylic paint was drying, I assembled the fake cherry to top the cupcake. I used two fake grapes, hot glued a 1’’ inch piece of electrical wire to the hole in the grape, and painted the pieces with a red nail polish so that the cherries could get a glossy red-candy look. For the frosting I used Spackling paste (can be bought at a hardware store) and mixed it with a tiny drop of red acrylic paint so that it would have a pink tint to it. After the spackling paste was evenly mixed with the paint, I loaded up the spackling into a pastry bag with a frosting tip (I used a star tip) and frosted the dry Styrofoam dome pieces. Once frosted, I sprinkled on various beads, added small crystals for bling, and topped the cupcake with the prepared cherry. No glue was needed to add the beads, crystals, or cherries because the spackling cemented the pieces on its own. (I suggest waiting at least 2 or 3 days to allow the spackling to completely dry.) Once dried, I hot glued the cupcakes onto the bra.

2. Hot Shorts:
I ironed on a sequin patch to embellish a pair of-high-waisted cotton shorts that matched my bra color.

3. Bow Hair Piece:
I used a holiday bow and took it apart, rearranged the pieces to keep a bow shape, and added a bobby pin to it to make it a hair accessory.

4. Cupcake-Candy Necklace:
I took apart a store bought candy necklace and used them as beads for the necklace. I used cardboard to cut out four quarter-sized circles and painted them as peppermints and added glitter. For the cupcake pendant, I cut out a cupcake cardboard shape and hand-painted a cupcake and added glitter. I strung the necklace using fake pearls and the candy beads along with the cardboard pieces together.

5. Be-dazzled shoes:
I used a pair of old pink platforms and glued sequins and assorted gems to embellish the platforms. To top the shoe off, I glued cake-designed erasers bought from a kids gift shop to the front of the platform shoe. 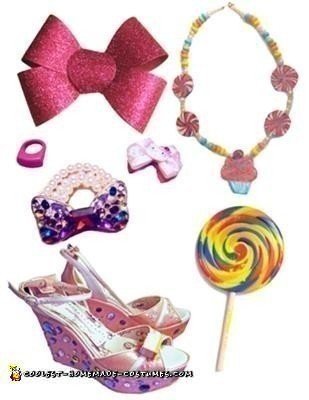 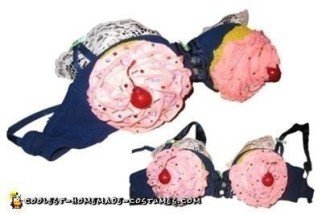 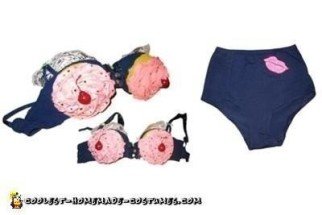