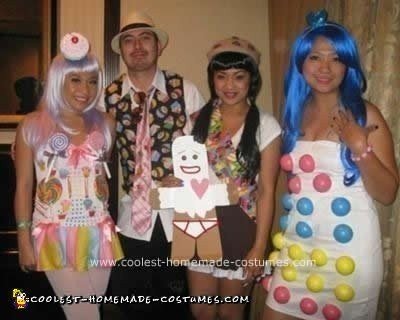 The idea for these Homemade California Gurls Candy Costumes came from the “California Gurls” music video by the artist Katy Perry. My friends and I all wanted to be Katy Perry for Halloween because we love her style, so we created our own versions of the characters from the music video. All of the costumes were created by us.

How to for the dress: I re-used a dress from a previous Halloween. I bought my materials at a craft store which consisted of the following: 2 real swirly lollipops for the torso, 2 fake swirly lollipops for each breast (purple & pink on sticks with ribbon), assorted cupcake patches made out of felt, and real smarties candies with the wrapping. I placed all the pieces randomly on the body of the dress. First, I glued the back of each piece to the dress, then I sewed each of those pieces securely on to the dress. (Note* you can arrange the pieces however you like.) I had to double-sew because I didn’t want any of the candy falling off in case people accidently pulled them.

How to for the headpiece: The cupcake headband was a creative idea I thought of to add to the costume. I ordered an artificial cupcake from a crafts seller on ebay. Next, I took an old headband which I then used glue and Velcro to keep the cupcake secured on it. It worked perfectly!

I wore a light purple wig, a pair of pink sheer stockings, and blue heels for the finishing touch.