I got the Candy Princess Halloween Costume Idea from Katy Perry’s candy dress in the California girls video. I found some dresses on the web that were highly priced or that just weren’t that cute. And beside I have this thing with having to make our costumes every year.

It was surprisingly cheap to make. My daughter already had a long white flower girl dress she wore to a wedding when she was like 3 years old (which has sat in the closet since then). So I started by cutting a small skirt out from the very top of the original skirt (which had a pettiskirt skirt attached already). I just cut it then sewed it under to give it a clean line. I added different color tulle which I already had handy. I just sewed stripes of color to the pettiskirt skirt (this doesn‘t have to be neat nobody will see this part). I used the extra fabric from the original skirt to make a shirt. I just cut a long strip which I wrapped around my daughter and pinned closed then sewed a straight line. I added turquoise ribbon for straps which were crossed in the back. I added pink tulle that was scrunched up to the top of the shirt which was a good idea because it kind of hung low once the candy was on.

I wanted to buy some fake candy ornaments (the kind you get for Christmas trees) but, they were kind of pricey. So I got a plastic lid(anything Plastic should work) and put hot glue in circles to resemble lollipops. I added little hooks (so I could sew them on) and sticks. Once they dried I popped them off and painted them. I used fabric paint and acrylic paints. I really wanted gummy worms and bears so I wired some making a hook on the top to sew on.I then painted them with clear glitter fabric paint. I originally started painting them with clear nail polish put ran out. The fabric paint seemed to work good. I just let it dry in between coats. I gave them a couple of coats! Don’t know if they will last longer then Halloween but we’ll see… I also painted over some empty wrappers and the wrappers of some mints(with the mints still in them.) I colored some cotton balls with a bingo dabber (I dabbed the bottom of a glass bowl then added a little bit of water-then put cotton balls in and let them dry).

Once everything was dry I sewed them on. I used hot glue to glue the mints, candy wrappers, cotton balls and beads (to resemble sprinkles). I also used fabric paint to paint on m&m’s and additional sprinkles. I used a lot of the clear glitter fabric paint. I originally wanted to start the candy from the top of the shirt and go down to the opposite side of the skirt. But later decided just to candy up the shirt and leave the skirt alone. The skirt originally had a big pink bow that went down the back which I kept but cut shorter to got with the tutu skirt. I went to Wal-Mart and got a princess tiara, wand, earrings, and necklace combo that was on sale for $4(original $5). I glued candy to the tiara (which blinked different colors-I didn’t cover that part). I also make a big lollipop pop with construction paper and hot glued it to the wand (this also lit up-so I just cut a hole in the middle).

My daughter loves things that light up and I really wanted her to use them in the dark for safety reasons! I also bought a $6 hot pink wig and $1 eyelashes at Wal-Mart. She had plenty of shoes she could of used or that I could of covered with glitter or paint. But we found these pink Hannah Montana shoes which went perfect at Wal-Mart and guess what they were also on sale for $12. So I might of used less then $30 for the accessories, some candy ($1 a bag at $general),and shoes. Everything else make up ,fabric, tulle, paint, and beads I already had. I recommend putting hair in a stocking. I used old ones we had by just cutting the legs off but leaving a little leg to tie up. My daughter has really long hair and this helped a lot!

Once she had the costume and makeup on I sprayed her down with hair and body glitter. The hardest part of this costume was the dress it self which you could just use a regular dress in a bright color or with sequins all over from a Goodwill or something you already have. They candy was fairly easy. Of course you can go buy the ornaments or just glue real ones all over(but it will get heavy). The shirt was a little heavy with all the hot glue I used, but my daughter didn’t complain.

She looked great and she got a lot of complements! My Homemade Candy Princess Halloween Costume Idea was a success! 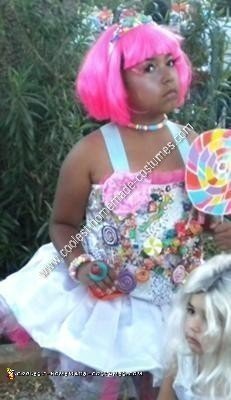 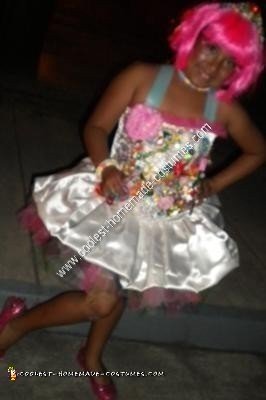