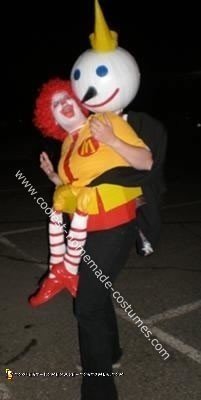 This year I wanted to be something original for Halloween. I looked around on the internet for ideas and I noticed that this site had illusion costumes. I thought I would try to make a variation on the Alien Abduction costume.

Mine was a Jack in the box Halloween costume carrying away Ronald McDonald in a box. It took a bit of time to make, but people loved the costume and I even won a costume contest at school. People at a party kept asking me if I was one person or two. Best part of all, no sewing! It’s as easy as taping everything together. Just make sure the Jack in the box hat and nose and well attached, people like to pull on them.

I am a big fan of duct tape, so to get the bright colours I wanted, most of the details I added to the costume were done with duct tape. The following things items were all coloured with duct tape: the jack in the box head, hat, nose, smile, eyes, the box the clown is carried in, the clown shoes and the stripes on the socks. Instead of duct tape, paint or markers can easily be used to add some fun colour.

For the clown, I bought a wig and painted my face. I had a red and white striped shirt on first, followed by the back pack. Over top of that I used an old yellow shirt to cover the straps. To make it look like I was being carried, I taped the fake legs to the inside of a cardboard box. The legs were made of a yellow table cloth, cut up to look like pants, taped over socks that were stuffed with more socks for the realistic 3D look. Finally, I added shoes to the stuffed legs.

Cool Jack in the Box Costume

Coolest Homemade Wendy and Jack in the Box Costume

3 thoughts on “Coolest Jack In The Box Halloween Costume”