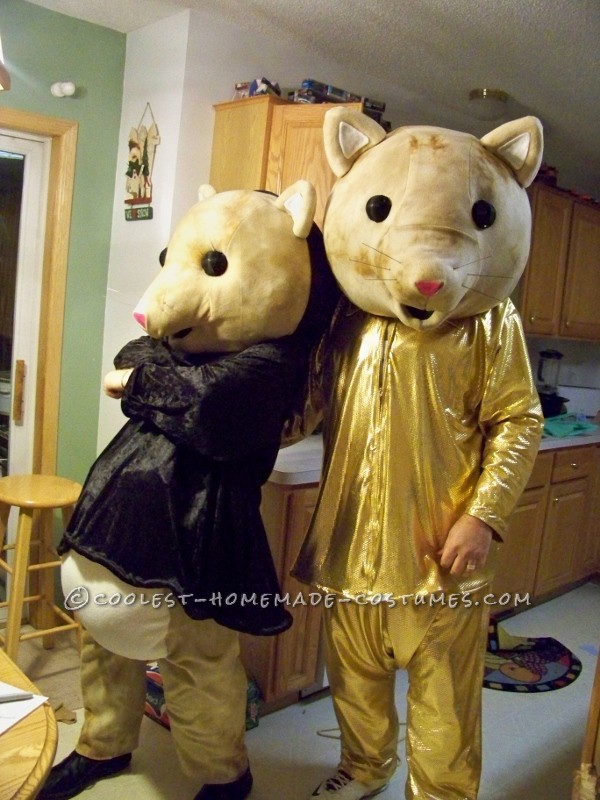 A friend of mine wanted her and her husband to be the Kia Soul “Hamstars” (the hamsters in the Kia commercials.)  I think we had great success with these ones – I know they had a great time at the party, they even won the prize for the most creative costume.

It took about 2 weeks to make them and my guess is about 40 hours of work spread across the weeks. It probably cost me a total of $150 when done (and I made the outfits at home too).

You will need the following:

Things you will need to use that you probably already have:

If you plan the ball “hole” correctly (by having it on the bottom of the head that won’t have mache on it), all you have to do when you’re done with the paper mache is “unplug” the ball and it deflates.

I found a small exercise ball for the bigger head and a little kid’s jumping ball (the ball with a handle that they bounce on) for the little head.  An 18-20” kids ball would be cheaper and ideal, but who knew most stores don’t stock them in the fall/winter in MN? Geeze…

I knew that I needed to have the round head up off the table and not have it perfectly round at the bottom, so I duct taped the ball to a bowl.  I wrapped everything in cling wrap so it would be really easy to work with.

Please make sure you put a protective covering over your floor and your table (I don’t know for the life of me how I got it on my floor, but I did – although it cleans up very easily.)

SHAPING FOR NOSE AND CHEEKS

The nose was just trial and error using card stock paper and/or file folders (SEE PICTURE).  The key to shaping the nose is making them about 7-8 inches long and to have them curve in where it attaches to the head. I also added a little “bridge” from the forehead to the middle of the nose because the hamster head will need a little extra shape there.  We cut the cheeks out of small paper plates, cut slits in them to make them more rounded and duct taped them to the ball.

Time to add the paper mache – which felt like I was back in grade school! I ripped up paper ahead of time so the paper mache goes quickly.  I did one layer a night until I had 4-5 layers on each of the balls.  All I used was liquid starch (bought it from Walmart) and newspaper. Talk about easy!

Make sure you have extra layers along the bottom of the head – this needs to be STRONG as you shape the head to sit on shoulders.

Once I had all the layers on, I deflated the ball, took everything out of the inside of the paper mache’d ball and added the jaw by shaping a paper plate and duct taping it to the head. I paper mache’d a few layers (SEE PICTURE) on the lower jaw (one layer per day – you must allow them to dry fully) and the heads were good to go! 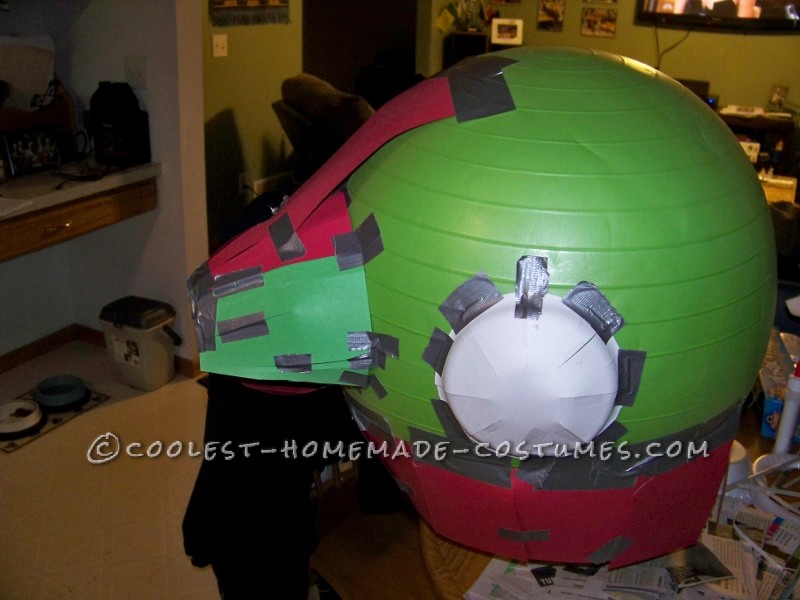 Making the shape to paper mache 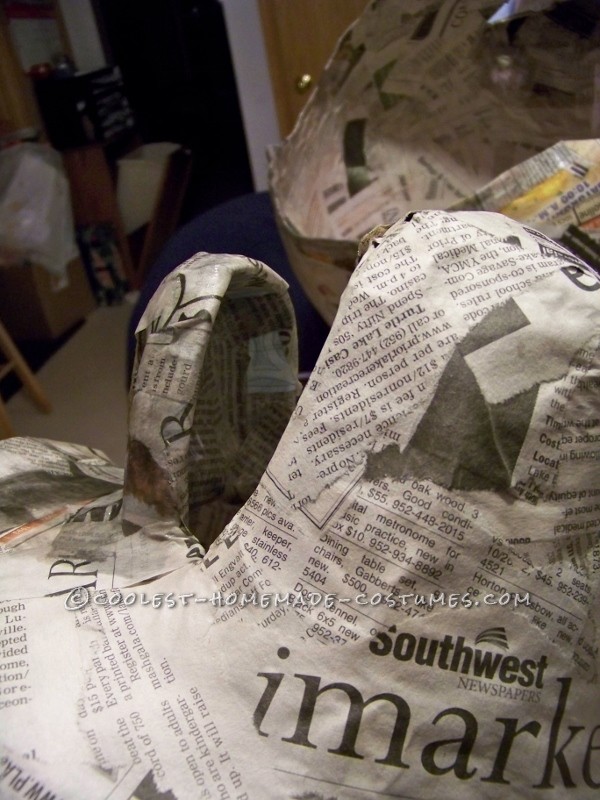 Adding the lower jaw (I felt like a plastic surgeon)

While you’re waiting for layers and layers of paper mache to dry, you have nothing but time, so start putting together the costumes.  My friend wanted the big black hoodie for herself and the shiny gold sweat suit for her husband.

I had a pattern for fleece pullover sweatshirts, so I just used that for the tops, making sure to add width and length to the body sections.

For the black hoodie, I made the hood part exponentially bigger than it needed to be when I cut it out (although, I needed to have made it even bigger because it barely fit around the head when it was done.)  Now that I have a year to next Halloween, I’m going to remake the black hood so it’s HUGE and fits way up over the ears.

For the hems of each of the tops, I just rolled the material up from the bottom to make a soft hoola-hoop kind of hem – this helps the bottom of the shirts to somewhat hold a shape, while giving the flexibility to sit (NEVER EVER underestimate flexibility to get around or sit in a Halloween costume – although ease of in-n-out to go to the restroom is probably my #1 rule now, lesson learned there.)

For her pants, I literally just traced a pair of scrub pants (adding an inch around the outside for a seam allowance) and cut four. Added the piece in the back to be able to make it fat and be able to have something between the legs to be able to sew the belly on the front to. (SEE PICTURE)

For his pants, I searched the internet for M.C. Hammer pants. Although, I didn’t have enough fabric to do the hammer pants part in one piece, I did have enough left over to do it in a couple pieces.

Make matching mittens out of the fabric you are using for the head.

If you aren’t a person who sews much, use large store-bought sweat suits and/or sweats. Go to the big and tall section to be able to make them really large. 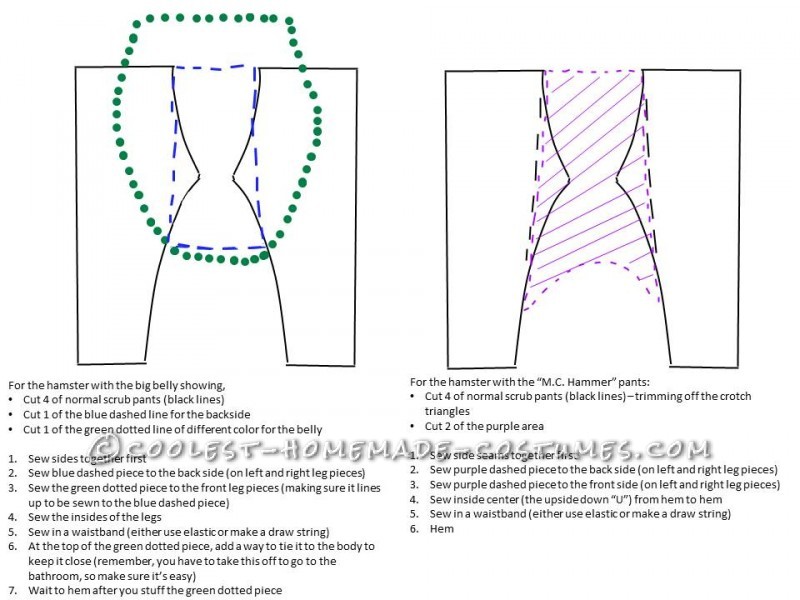 Instructions for making the pants

Cover the heads with fleece

Try the head on the person that is going to be wearing it so you can CUT OUT a spot for the shoulders – the heads will rest nicely on the shoulders if you cut the space for it.

I used 1” foam and hot glued pieces to the head (SEE PICTURE) and foam around the nose – trust me, it’s not pretty at this step, but it doesn’t have to be.  Put it together like a puzzle and use the foam to “SHAPE” the head.  This is where you leave space for the eyes, make the top of the head a little taller (it doesn’t end up perfectly round). It’s OK to shave/cut off the foam where you want.

After you’re done with the foam, take the solid color fleece and lay pieces over the head.  I cut slits in pieces to make it round – SEE GRAPHIC (which includes the following details):

THICK RED DASHED LINES are the cuts for the pieces of fabric.  (Think like a baseball.)  Make sure they are cut LONG past the bottom so  you can use the excess to pull and glue into the inside later.

THIN RED LINES are the chunks I cut out and sewed together to adjust the curves and make it lie flat on the head.

When it comes to covering the nose, wrap the material all the way around the nose, but don’t finish off the front of the nose – leave the extra material there for now…  you’ll finish it off when you do the nose later.

DON’T SEW THE PIECES TOGETHER YET

The cool thing about this FIRST round of covering is you can write on it, mark it up, whatever… then once you have it exactly how you want it, use it as a pattern to cut out the color you want to use for the real hamster color. Sew the solid first color together and place on the head – use polyester fiber fill to patch the holes and imperfections in your foam job and to add additional shaping as needed. Add the real hamster color top layer.

Don’t do anything for the eyes yet – you will position and cut them out later. Glue everything into place.

NOTE TO EVERYONE – hot glue works well, but it HURTS LIKE THE DICKENS so if you’re going to use it, don’t have your young children around or they will learn WAY to many new words! 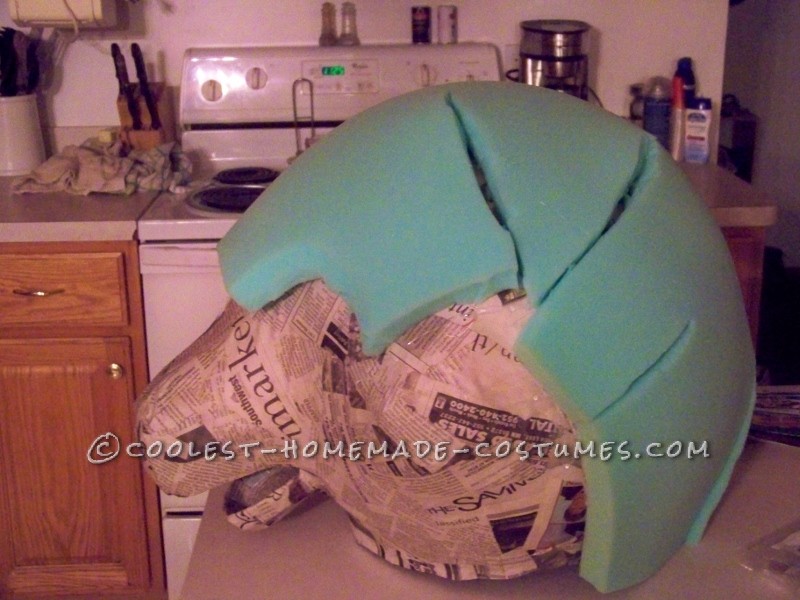 Adding a layer of foam over the head before the fleece 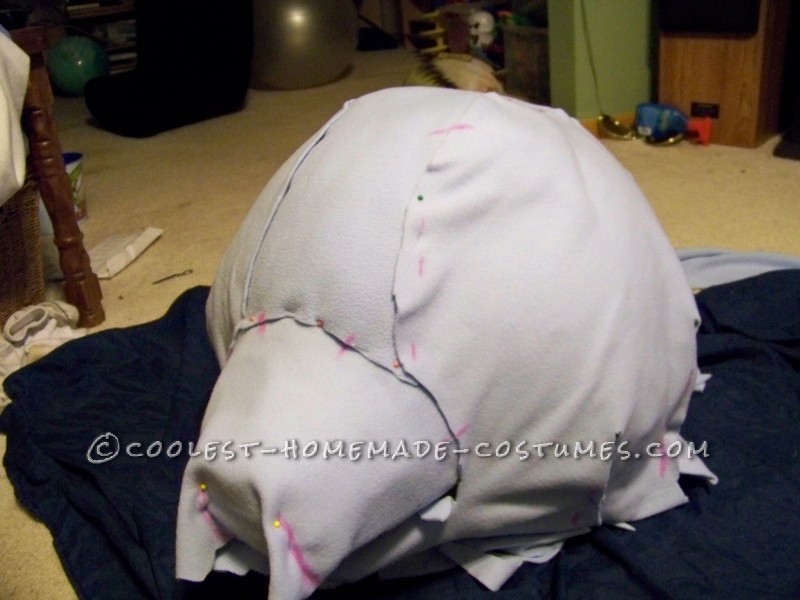 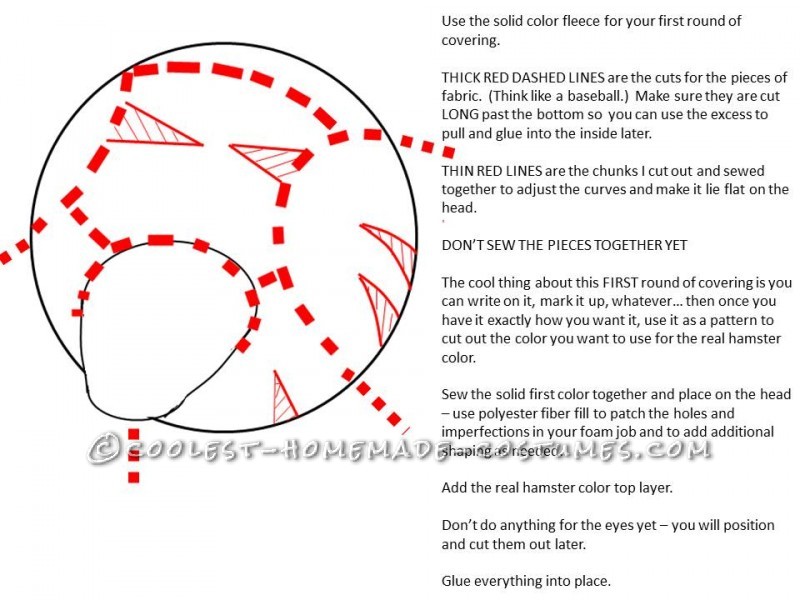 Instructions for covering the head

Make a pattern on a piece of paper for the ears.  Cut two for each head (duh) out of stiff foam (we used insulation foam).  Once you have the basic shape cut, you can whittle or sand down the material to be the ears that you want.  They should be a bit rounded and indent in the front.

Cut out pieces of material to sew together and put over your cut and shaped foams. Glue an opposing color to the insides of the ear.

I marked the spots where the ears should attach (you should have somebody hold them while you look in order to mark the right spot). I poked a hole in the marked spot (using a really strong sharp needle) and attached the ears by pushing a kabob skewer through the head, foam and cover.  Then slide your foam ear on to the skewer and hot glue the remainder of the ear to the head.

Mark the spots for the center of the eyes and cut the hole.  Cut slits in the material but don’t cut it all away – you want to glue those leftover material slices into the inside of the head.  Make the eyes out of plastic globes (I used the 2-3/4” ones). I glued the material to the globe first, having a lot hanging over the edges.  I pulled the leftover material through the eye holes and glued the eyes to the head, then I glued the left-over eye material on the inside of the head.

For the nose, I made sure to put enough polyester fiberfill in the front to make sure it’s rounded and hamster-like.  Then I folded the material so it creates a “Y” (SEE PICTURE) in the front and glued it into place. I simply cut a piece of shiny pink vinyl fabric and glued it on for the nose.  Making a good nose is one of my upgrades I am going to do.

I wasn’t even thinking about adding whiskers, but I pulled out the broom to sweep up a little bit, looked down and though, “WHISKERS!” so I cut 6  for each hamster. I attached them similar to how I attached the ears, by cutting a hole through with a strong needle and then pushing the whiskers through from the outside in after putting a dollop of hot glue so it would stay in place once done. 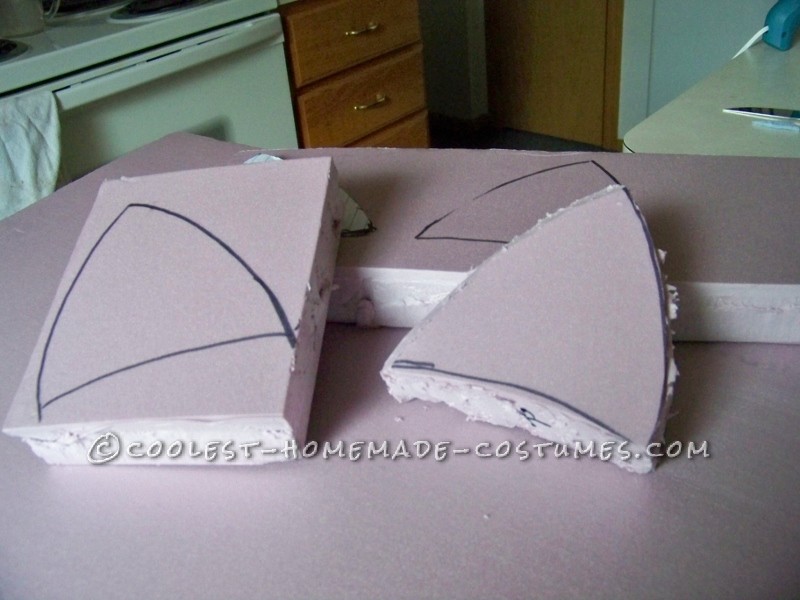 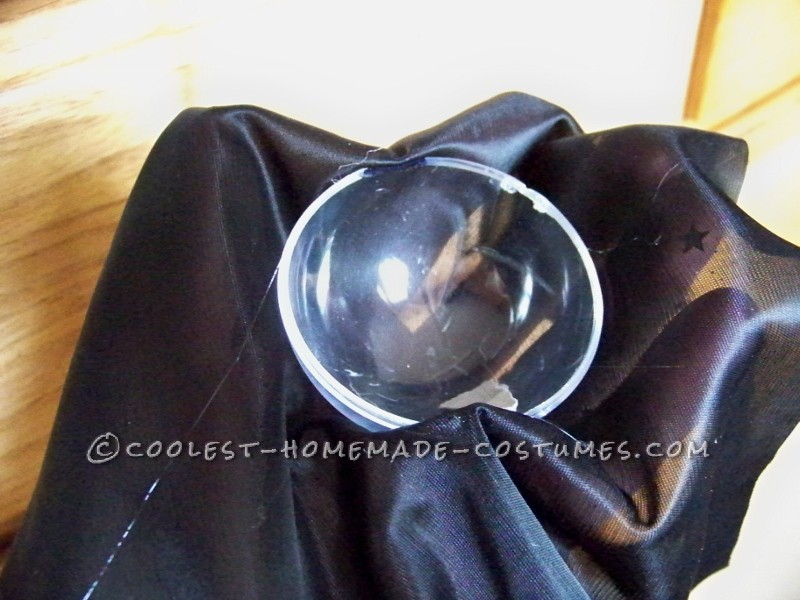 Cover the eyes with material 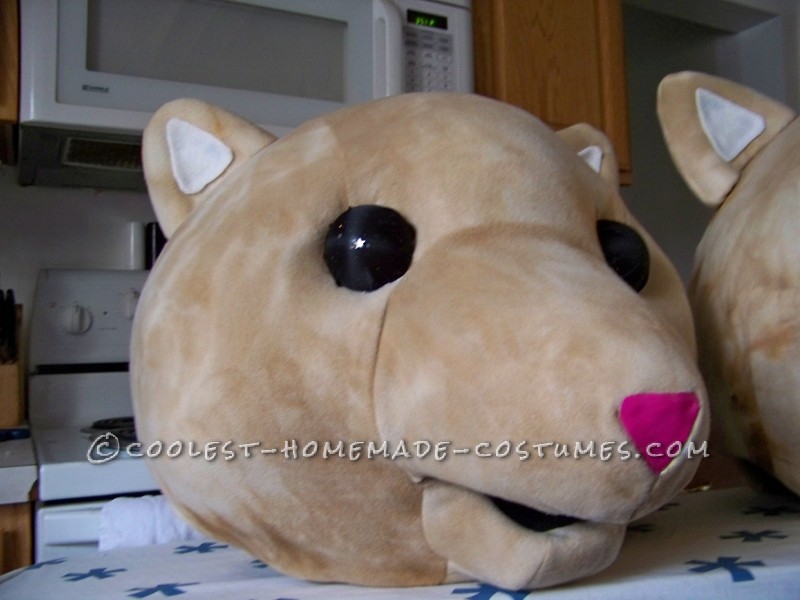 Finishing up the head

Bring long twisty straws with you (otherwise you won’t be able to drink with  your head on) – although, keep in mind if you drink through a straw you probably get drunk faster, so drink responsibly if you have to, and if you don’t have to – have at it!

Make a pair of headband ears in material that matches the costume and put on nose and whiskers on your face – eventually you will get to the point where you want to take off the head and socialize and this helps you still look in character.

If you are going for extremely professional finish, spend $50 a piece on black replacement security system camera domes for the eyes.

I didn’t have time yet, but want to find a way to Velcro the heads to the shoulders… this way they are more stable.  It is VERY important to make sure that the heads are not attached in a way that you can’t take them off quickly in case it is needed.  Safety needs to always rank above really cool stuff.