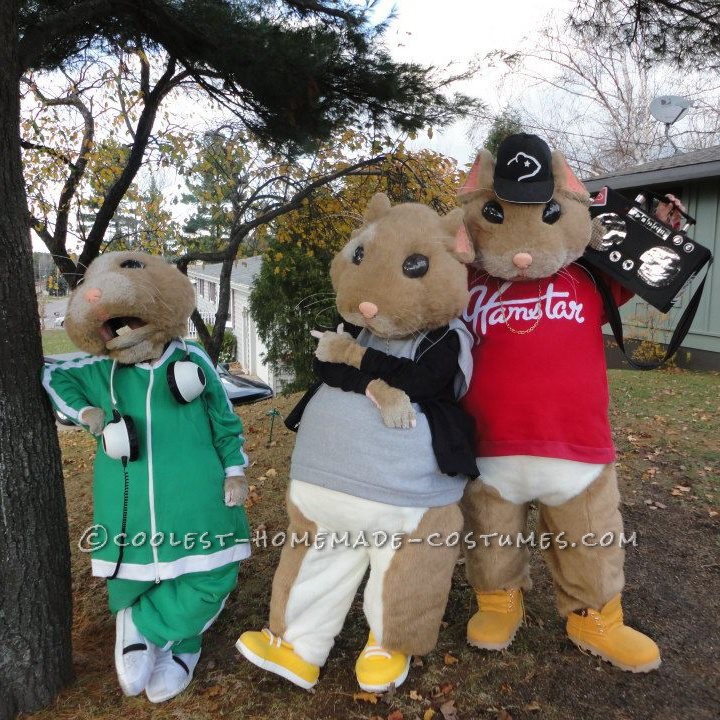 I’ve always loved Halloween and done pretty detailed costumes and always at the last minute!  I wasn’t going to “do” Halloween the year the Ganster Hamster Kia commercial came out but on Oct 1st I decided I wanted to use that theme for my costumes.

We were a pretty big hit walking around town and at the local parties.  I had the song playing from the tv commercial playing on my IPOD thru speakers in a cardboard boombox I made.

We handed out candy during the business trick or treating and soooo many people took pictures of us with their kids.  Women even handed babies to us to hold for the pictures which was a little dangerous since we couldn’t see anything directly below our chins!

Curbs and lamp posts were a slight hazard and it was difficult to hear each other talking but it was all definitely worth it.  Each hamster cost approximately $100 to make (not including the clothes) so they were pretty expensive.  They will definitely be making a 2nd appearance at some point!

We won 2 costume contests!  Its pretty fun being totally covered and no one knows who you are.  We tried mastering the hamster dance but weren’t very successful with that!!

I knew the local Ben Franklin had the perfect fur but started with the head(s)  I layered 1″ thick craft foam until I got a basic  head shape then using an electric knife I carved it into the shape I wanted and picked foam out of the inside until there was a space for our heads.  I watched the commercial over and over and over on Youtube until I got the perfect shape.  I pulled apart the layers of the first head and made cardboard patterns of the foam layers for the sequential 2 heads so I wouldn’t have to start from scratch and they would all have the same shape.  Originally I wanted the lower jaw to move but scrapped that idea and just glued them in place.

I put a layer of batting over the general foam shape to smooth everything out, carved some ear and picked foam out of the center for the inner ear for texture when I painted it and put the eyes in.

It took me a long time to figure out what to use for the eyes.

I knew we really wouldn’t be using them to see out of since they sat so far apart and they sat higher on the head.  I decided on clear acrylic Christmas ornament (solid ones, not the 2 piece) and cut them in half.  I then lightly coated them with a spray tint I found in the automotive section.  Several attempts later I got 6 decent eyes and hot glued them in the heads squeezing them slightly so they had a more rodent-like shape.

I started  applying the fur cutting and shaping it as I went so the grain of the fur when up and out from the nose.

The heads were VERY furry and scruffy at first but I bought a pair of clippers and sculpted the fur on the face and cheeks so it was shorter.  I’m still finding fur in my bathroom!!  Looks a little like a furry manatee at this point! 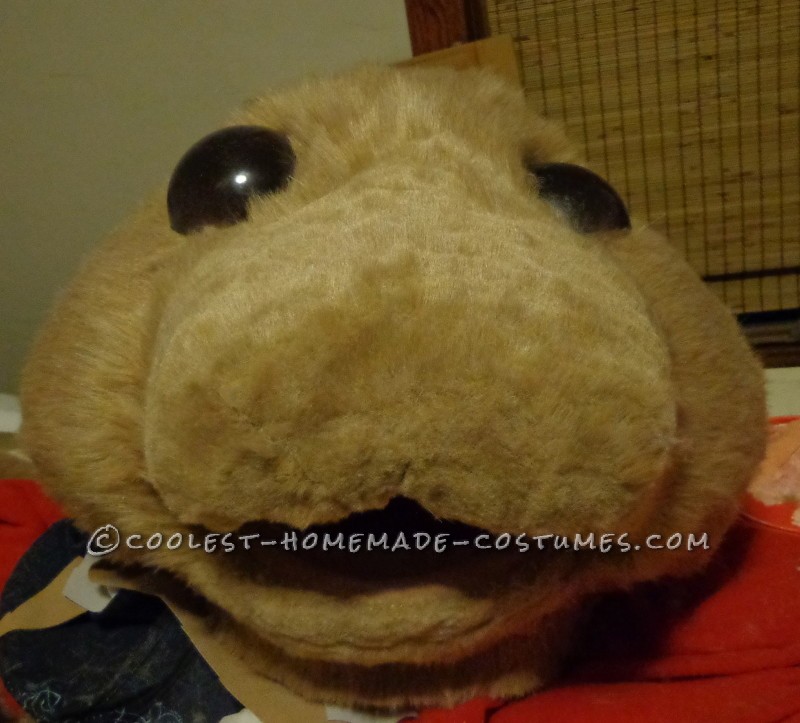 Fur after a haircut

I made noses and teeth out of shape and bake clay and painted them with acrylic paint.  The whiskers were really heavy fishing line I had.  It was pretty coiled up so I ironed it on a low setting until it stayed straight and hot glued it in place.

For the paint around the eyes, etc, I thinned out some white acrylic paint and combed it thru the fur and combed it until it was dry so the fur didn’t mat together.

The three completed heads sitting on the couch were pretty funny.  The hat was made out of foamie sheets cut and hot glued together to get the shape and the logo was cut out of more foamy sheets and glued on. 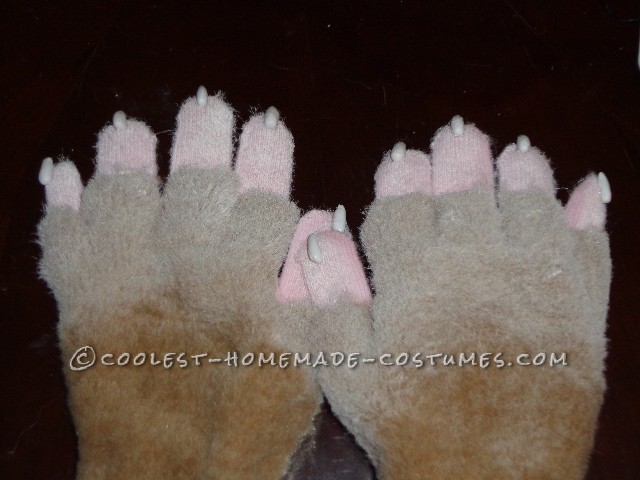 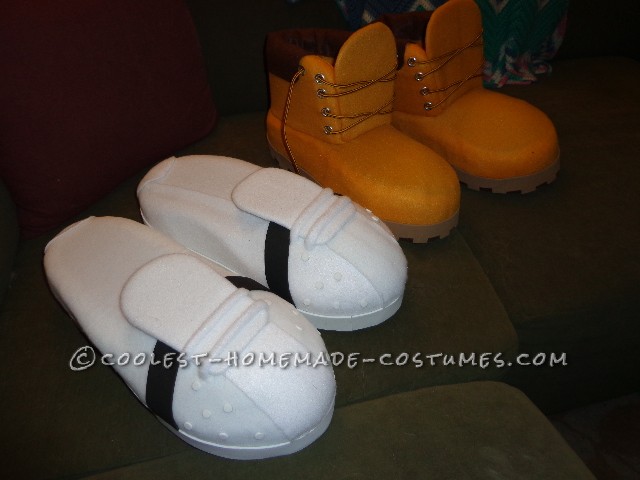 I bought pink stretchy gloves and hot glued shaved down fur on the backs and made toenails out of more clay.

The headphones were bowls connected with more foamies and metal strapping with foamie details.

The shoes were made following this tutorial I made for my muppet costumes I made but made shoes instead of feet.

Since all the hamsters are wearing shirts I only had to make a lower body and legs.  I used outdoor upholstery batt since it was light and held its shape (more expensive than the foam but I thought it would be cooler and a little more flexible for sitting.) The body was first then the legs were added.  After several attempts of figuring out where to attach them myself I had to make several trips to my mom’s for her to do it while I stood straight up.  I used white and brown fur following the batt patterns.  I held the pants up using suspenders.  There was enough room in the pants for 1 pillow lower down and 1 stuffed 1/2 way down so the shirts had some padding under them too.

I made a giant sweatshirt and printed out the logo (multiplied several times) and cut that out more fleece backed with sheet fabric adhesive.  I had to figure out a hood large enough to go over the head of one of the hamsters.