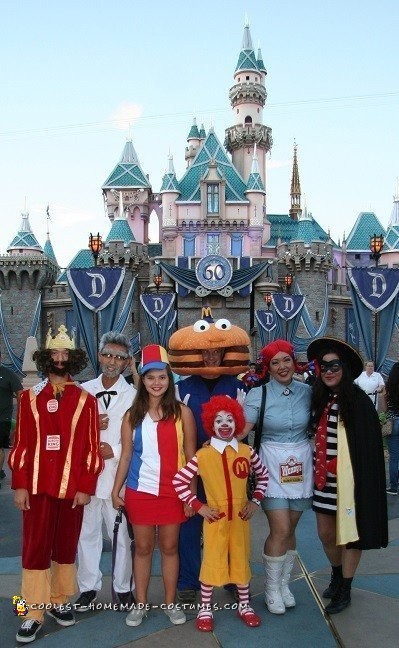 We dressed up as fast food characters during our annual trip to Mickey’s Halloween Party in Disneyland. We were stopped countless times for pictures. I thought my kids would get frustrated as it slowed us down from rides, but they loved the attention. As soon as one picture was taken, another person would jump in and beg for 1 more photo. People would yell, “Ronald!”, then see the rest of us, and quickly name each character. It was worth it making this fast food group costume.

We used thrift top, thrift XL polyester pants turned into a skirt, an apron made from old dress shirt (cut square shape, attached eyelet trim (Joann’s) to edges, made/sewed straps onto each side). We used a T-shirt Transfer Paper (from Michael’s) to print Wendy’s logo and ironed it onto the apron. We Glued a print-out of Wendy’s freckle face logo onto old brooch. The Red wig was from amazon.

We used a white lab coat shortened to look like a suit jacket. We added white nurse scrubs for pants. The white hair was spray by Graftobian. It was $10 a can and lasts longer with hairspray as the 2nd coat. the Eyebrows and goatee were both made with wool crepe on double sided adhesive sold in theater supply stores (we didn’t use double side office tape, or spirit gum/glue because of the strong odor). Glasses were $5 from amazon. The black tie was made from satin ribbon and Velcro.

My 9-year-old was famous as Ronald. People couldn’t get enough pictures with him. The jumper was repurposed from thrift ladies pants (sheer luck they were big enough). The socks were from Savers Halloween dept. The Striped shirt was part of a PJ set. We got red Crocs and a red clown wig. We cut the collar off the dress shirt and attached it to the jumper.

We cut white felt circles and the yellow letter M and hot glued them to the jumper. We took some red felt strip and hot glued it down the front of the jumper as a fake zipper. When you face paint, do the white color LAST. Red and black face paints don’t layer well on top of white. We took him to an actual Mcdonald’s on Halloween and he got a free Happy Meal!

Hot Dog on a Stick Costume

We used thrift red skort. The shirt was actually four different t-shirts (red, yellow, blue and white). I stacked them and cut them into 4 sections. I then sewed different colors/pieces back into a shirt, then cut off the sleeves and cut around the neckline to create a tank top.

The hat was an old New Year’s hat. We added other parts of the colored “new” t-shirt and attached them to the hat with hot glue. We cut the brim off a baseball cap, and attached blue fabric and hot glued that to the hat.

We used a thrift red velvet jacket (I cut slits into sleeves and hot glued gold satin ribbon between slits for puff sleeve look. I also hot glued a gold ribbon on the front of the jacket. We got thrift red velour exercise pants with gold boot covers which attached at knee level. The cape was made from gold satin fabric with the collar made from a dalmatian print felt (Hancock Fabrics). I got a BK paper crown and hot glued it to a plastic sizable crown for support, then hot glued some hairpiece combs to the crown. The beard was some wool crepe hair on double-sided theater adhesive strips. This costume was tough to make and hot to wear. My son joked he looked like Homeless Emperor but still loved the attention.

We got a thrift striped dress with the sleeves cut off. We added yellow satin to an old black cape, and the hat was from a Bolero costume, so we added a yellow ribbon. The black mask was from Walmart. We got the red tie from Daiso, and I had hamburgers ironed on. We printed hamburgers on Transfer Iron-on Paper from Michael’s. And we got some red mittens.

My husband got so much attention as Officer Big Mac, especially from older people who remembered the character. We got a thrift blue graduation gown hemmed below the waist and thrift blue nurse scrub pants. We added white cotton gloves and a belt. The belt was made from hot glued gray/black felt which we attached with a safety pin.

The star badge is gray felt and a yellow M was hot glued on the costume. We got the whistle from Walmart sports section. The head was made from 2 pieces standard sized foam core (Michael’s). I cut the largest circles I could on both pieces.

For the top bun, I cut a hole in the middle (like a donut) just large enough to hot glue onto a baseball cap for support. I Used light batting and cover board/cap with light brown fabric on the topside only (other side doesn’t show, and use hot glue). The cap should be attached backwards.

For The bottom bun, I cut a bigger hole in the middle so his head fits through it. I covered the bottom bun with light batting and light brown fabric on the bottom side only (use hot glue). For burger patty, I make a long rectangular pillow from Choc. I used brown fabric. It should be long enough to stack onto the bun and shaped into a letter C.

Starting from one side, I hot glued the length of patty pillow onto the outer edge of the bottom bun. It took a lot of hot glue so I held it in place until it dried. Then I hot glued the top bun to the top of the patty. For cheese, I sewed a long rectangular piece of orange fabric that was half the height of the patty. Then hot glued it along the middle of the patty.

This makes it look like 2 patties separated by a layer of cheese. The eyes are a styrofoam ball cut in half and hot glued to the top bun. I used a black Sharpie to color the eyes. The nose was a piece of cardboard covered in the same light brown fabric and hot glued. I used some yellow puff paint to paint sesame seeds on the top bun. The hat is a plastic cup covered in blue felt with yellow felt for letter M. 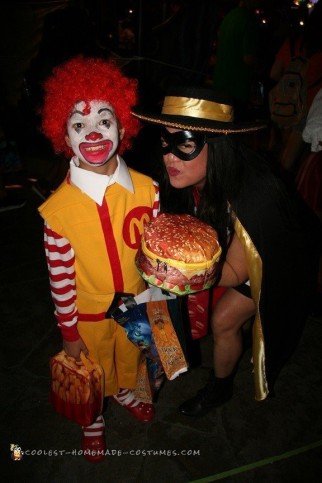 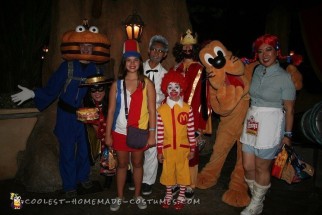 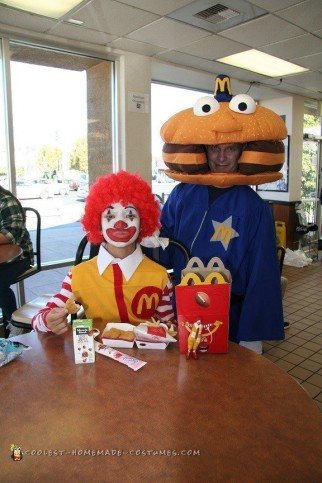