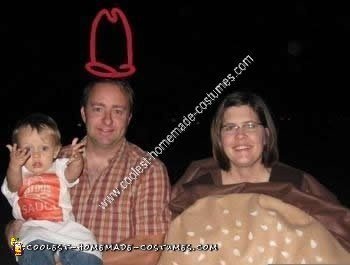 We had great fun dreaming up this group Homemade Arby’s Family Halloween Costume Idea. I was trying to think of something minimal for my husband as he doesn’t like to dress up. The guy “thinking” Arby’s seemed like the perfect minimal costume. Then the wheels started turning in my head. Every husband should be thinking of his wife, so I figured that meant I needed to be a roast beef sandwich! I knew we would be carrying around our 1 year old for the evening and so the sauce packet idea was born.

To make the “Thinkin” Arby’s hat I printed a picture of the hat and cut it out to make a pattern. I then traced it onto a double layer of red felt to I would have 2 hats and I could sandwich wire in between. I used starch on the 2 felt hats to make them stiff. I used pipe cleaners as my wire in between layers hot gluing it onto one hat. I then hot glued 2 pieces of thicker copper wire down the two sides of the hat with about 6 inches sticking out below the bottom. I then used more hot glue to glue the other felt hat on top hiding all the wire inside. Next I took a cheap hard headband and would the ends of the copper wire around it in opposite directions from each other to attach it.

The roast beef sandwich was made from cardboard, felt, hot glue and grocery sacks. For each side of the bun I cut a piece of cardboard into a big circle. I then cut a light brown piece of felt in a circle a bit bigger than the cardboard. I hot glued the felt around ¾ of the edge. Then I stuffed it with plastic grocery bags through the area that was still open. I finished with closing up the last ¼ of the edge with hot glue. Next I took a dark brown piece of felt that was quite a bit bigger than the bun and glued it to the back side of the bun and randomly folded and squished it around the edge while gluing to make it look like roast beef was coming out the sides of the buns. Lastly, for the top bun I freehand cut out sesame seed shapes from a cream colored felt and hot glued them all over the top. To attach the top and bottom buns so that I could wear them I used 2 strips of 3 inch wide dark brown felt and hot glued and then stapled them to each bun connecting them so they would rest on each of my shoulders.

The sauce packet was made from an old pillowcase and an iron on transfer printed on my computer. I took a picture of a real sauce packet, cropped the picture and printed it out on the iron on paper. I then followed the directions on the package to transfer it onto my altered pillowcase. To alter the pillowcase I held it up to my son to measure how wide it needed to be to fit him. I ended up trimming off about 6 inches of the width and sewed the side together. I then cut a hole in the top for his head and a hole in each side for his arms. I then tried it on him so I could measure how short I needed to make it. Then I trimmed off the excess and hemmed along the bottom.

That’s it! It was an easy and cheap group costume to make and we got tons of laughs everywhere we went!