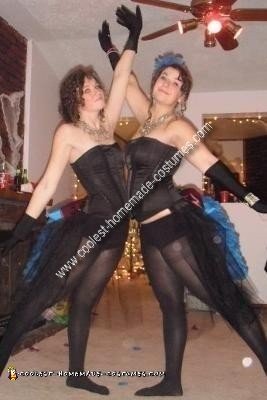 My younger sister was finally old enough to go to the same party as me so we decided we wanted to match. We wanted costumes that were show stopping and what could be more suited than a pair of showgirls!

Most of the items to make the Homemade Showgirl Costume are purchased and the put together. It ended up being rather expensive.

We bought the black corsets at Charlotte Russe for $20 each. Picked up some cheap shiny jewelry, I really liked the bracelets and stretch rings we got for over our gloves. we also bought black elbow length gloves, black tights, two different colored feather boas, and fabric to match each boa color.

The most difficult part is actually making the feather piece for the waist. We used thick black elastic from a craft store as the base. We cut the boas in half, then folding them in half again, we sewed the center of the boa near the end of the elastic, and then the second color over it so that it resulted in one strip of blue, two strips of purple, and then one more strip of blue. We also took black tulle and gathered it, then sewed it under the feathers to add volume.

To finish the waist piece, we made a two tone bow out of the fabric pieces which was sewed on over the center of the feathers. Then we just used a large safety pin to secure the band around our waist.

The only other thing we made was using the ends of the outer boa because it didn’t matter if it was a little shorter than the center, we sewed small tufts of feathers to snap hair clips to add once our hair was finished.

After that you just put it all together, glam up your hair and makeup and party! We got tons of complements and even won best costume.