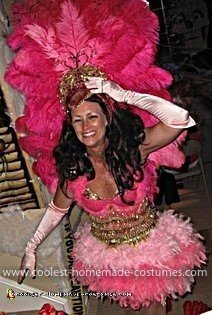 Once again it’s that time of the year for my sister’s annual Halloween party! I had just gone to Las Vegas and saw a show and that’s how I came up with the idea of being a showgirl for Halloween. I looked online for a real showgirl outfit and they were about $2,000 and the costumes at the Halloween stores didn’t look like a showgirl to me! Therefore, I decided to make my own showgirl costume.

[Head Piece:] I bought a sun visor at Kmart for $2.99 on clearance, turning the visor upside down is what I used as my base. Next, I went to Home Depot and bought some thin electrical wire. I made a design out of the wire. I then covered the wire with a metallic gold ribbon. Next, I sprayed paint the entire visor using 14kt. Gold color purchased at Michaels Art & Craft store.

Then I decorated the wire with different sizes and shades of pink to the wire. Next, I hot glued a hot pink sequence ribbon and covered the part where the visor ends all the way to the part that holds it on your head. I wanted to cover the ends of my wire and didn’t want it to look like I used a visor. I then bought a choker that is made out of material for you to decorate yourself from Michaels – it was sturdy and had the perfect shape that I wanted.

I then sprinkled the Gold Tinsel glitter on the entire thing. I hot glued a sequence with a pattern with both hot pink and candy pink in color and hot glued along the edge. I then took a thick gold ribbon and glued it around the edge.

Next, with the visor upside down, glued it in the center (where it looks like a headband). I trimmed the bottom of the feathers and starting in the middle of the back of the visor, I hot glued each feather making a fan shape design. Once all 18 feathers were on, I hot glued gold rhinestones down the entire stem of the feather. Now my headpiece was done! It was perfect… I put it on as if it was a headband and it was tight and stayed in place.

[Back Pack:] I bought a kids roman shield. I used feathers for the back pack. I trimmed the end of the feathers again and hot glued the feathers starting in the middle of the back side of the shield making a fan shape. Next I used gold sequence ribbon and screwed in screws into the shield and now I have my straps.

[The Top:] I bought a cheap $5.00 bra; it was hot pink with a pretty design and gold. Then I took one of my old light pink bras and cut the cups out and hot glued it to the inside of the hot pink bra, show about an inch of the light pink bra. I used tacky glue on the light pink bra that was showing and covered it with gold glitter tinsel.

Then I took some of the candy pink small feathers and tore off some of the feathers from a boa and glued it along the edge of the bras. I already had two pieces of velvet pink fabric, which had rows of gold beads and coins. I hot glued the first fabric to the bra strap and then when I put it on, I tied the second piece right under the 1st piece and it was very fitted and looked like one piece.

[The Skirt:] I had an old white petty coat from a previous costume. I took 3 boas and hot glued it to the first layer of the petticoat. I made sure there were no holes where you could see through the feathers.

[Accessories:] I bought nude dance wear fish net panty hose. I used pink gloves from a previous costume. I also had clear high heels (stripper shoes) that I used for another costume. I also had a professional black wig. I wore false eyelashes and used a gold and pink shimmering eye shadow and a lot of foundation. I used a pink shimmer eyeshade and rubbed it on my chest, neck, shoulders.

It cost me about $120 dollars to make and $80.00 of it was for the feathers. I made the showgirl costume in 3 days, 8 hours a day. It was well worth it… people at the party, then after at the bar, thought I paid a lot of money or borrowed it from a real showgirl. 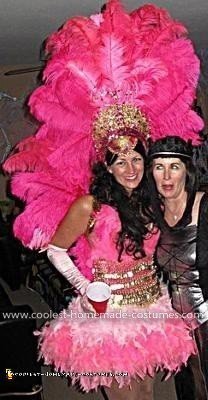 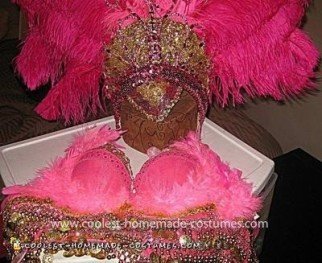