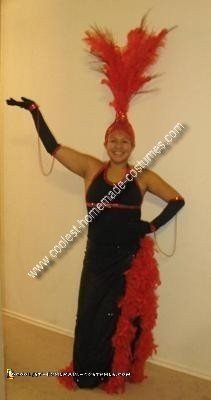 This homemade showgirl costume took a lot of imagination oh how to get everything right. I spent around $100 and 48 hours making this. The majority of time was spent on finding the basics so I could add things to it. My list of materials were:

* 1 black dance leotard (you could use a bathing suit too, but this was made to be a costume… think Laker girls)
* 2 red boas
* 1 foam highlighting cap (you stretch over your head and then pull out hair to highlight. It’s what some pros use instead of foil)
* 1 Styrofoam cone shaped piece
* 3 wire hangers (fully stretch out)
* 1 pair of black gloves

and I’m not sure on the exact amounts but I got black fabric with glitter in it, lots of feathers and sticks, red beaded necklaces, fringe (like the kind you put on the trim of a decorative throw pillow for the hang down in the front of the hat) and lots of sequins. They were on bands though. Don’t think I glued it together one sequin at a time! That’s just crazy!

Anyway, I put some sequins around the leotard. I sewed a skirt out of the black fabric and then sewed a boa to the outside of it. I made it open on one side for my leg so the boa goes up. My leg just isn’t out in the picture. I put sequins on the wrist and ends of the black gloves and then added beads to it. All pretty basic.

The hat was the hardest! I had to get the position of the Styrofoam just right so it wouldn’t fall and would still be able to be covered. I stretched out my hangers and placed them in the Styrofoam. Once they were in place I started from the top and glued feathers so they would stick out. I also put red-glitter covered sticks for extra flair. I did this until a nice plum was made. Then I glued the Styrofoam to the headpiece. From them I had to put the beads on the front first (so they would hang down but I could still cover them with the sequins) then just glued the strips on to cover all of it.

It is VERY hard to wear this homemade showgirl costume because you always have to duck but I think I can handle it. Let me know what you think! 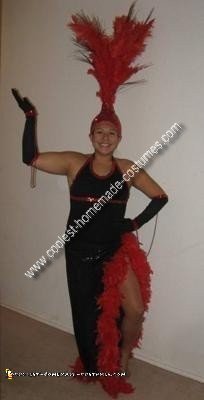