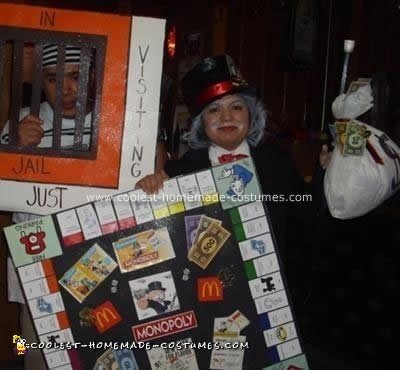 With a family of 6, McDonalds is just a part of dinner at least once week! As I sat in the drive thru, I realized I had the idea for this years costumes, a Homemade McDonalds Monopoly Couple DIY Costume. I purchased several clothing items from the local Goodwill and Salvation Army, made my own top hat out of a straw hat base, rounded in cardboard and cut up and old black satin dress for the fabric of the Top Hat. The cane was made out of an old plastic shower curtain rod, spray painted it black, made my money bag out of a pillow case!

The Jail mate was created by using some old t shirts and a baseball cap with the lip cut off and covered in a striped tshirt. The “In Jail” space was created with cardboard and poster board and hand written. The monopoly board was created using Word with tables and fill color.

I found the actual monopoly clip art on a monopoly website including the money! I uploaded my file and sent it to Fedex to print in color. Cut out each square using the actual McDonalds monopoly game board as my guide. I took McDonalds bags and cut out the different prizes and their logo. The $ symbols and dice were bought at the Dollar Tree. The finishing touch some white hairspray and glitter for a little something extra!

I don’t sew so every thing that required assembly was put together with the power of the hot glue gun and some glue sticks!