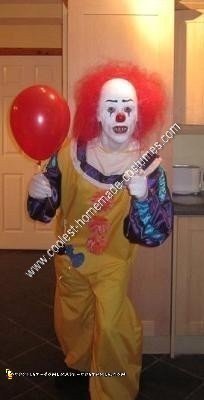 This Homemade Irish Pennywise Halloween Costume took a lot of work. From nearly loosing my teeth and eyes, to murdering a woman in a textile shop with a box of knitting needles to not being able to pee!!

Firstly I had to get over my fear of clowns. A lot of shopping around for items such as clown nose, teeth, wigs etc. For instance, the red contacts here in Ireland would set me back 60Euro where as on the Internet I got them for 22Euro. Bargain or What!

The hair piece was the most difficult. I had planned to use a football and turn it inside out, after two failed attempts at getting this to work. I decided to use a bald head, painted white and glued one of the three wigs that I had bought (just in case of disaster). With a great deal of glue, which I had to wait overnight on the 30th to see if the wig would hold. Thankfully it did hold. Then with a fine bit of backcombing by myself I got the wig sorted.

While this process was going on. I had my poor Mammy making the suit. I traced all around Dublin for the yellow material. I was going to stab some woman in a textile shop. She picked up the LAST three metres of yellow material!!!!!ARRRRGHHHHHHH

Eventually I got some, and my mother who was just out of hospital recovering from an operation, was chained to the sewing machine to make the suit.

A lot of hard work, red eyes from the red contacts, sore gums from the fake teeth and my mothers dentafix….Uggghhhh. Its like putting sap from a pine tree on your gums just for the fun of it!!!

Just a word of advice, put a zip in the groin area before you go out to the pub. My right hand pocket had to do the trick.. Very funny, a clown in the toilet and ….. you know the rest.

Hope you all enjoy the pic. Got great reaction.