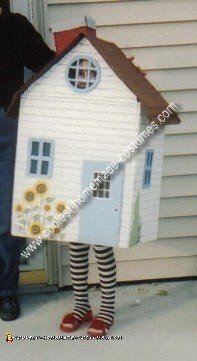 The idea for this House That Fell On The Wicked Witch of The East Costume came from the fact that the original Wizard of Oz was released to DVD and my kids just loved the movie. They thought it was the funniest thing that the house fell on the witch. So I came up with idea to make my daughter into the house that fell on the witch.

So I found some boxes at work that would be big enough to fit over my daughter and come down to her knees. I cut the bottom flaps off and glued the top flaps down really well with hot glue and then cut a hole big enough to fit over my daughters head so the box would rest on her shoulders. So her head is in the attic part of the house. I then built a roof pitch and gable ends on it with other pieces of cardboard box and hot glued them together. I made the chimney out of card board boxes as well. I just tried to use what I knew about building a house to make it look real. I then cut a hole in the front so she could see out and made the window out of card board and glued I over the hole. The rest of the house was just a matter of painting it. I painted the doors, windows, flowers, siding, and just tried to make it look as real as possible.

To make the witch legs we found some white and black striped stockings and some red dress shoes and it all come together wonderfully. She looks just like a house that feel on the witch. 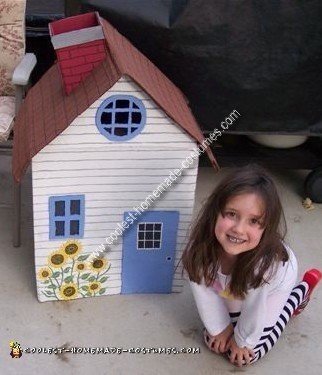 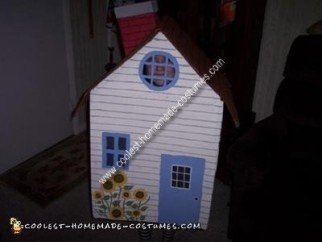 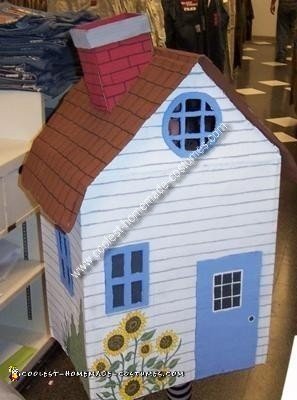 Pregnant Mom and Baby Couple Costume: Wicked Witch of the East and House that Landed on Her

Dorothy and her House that Landed on the Wicked Witch