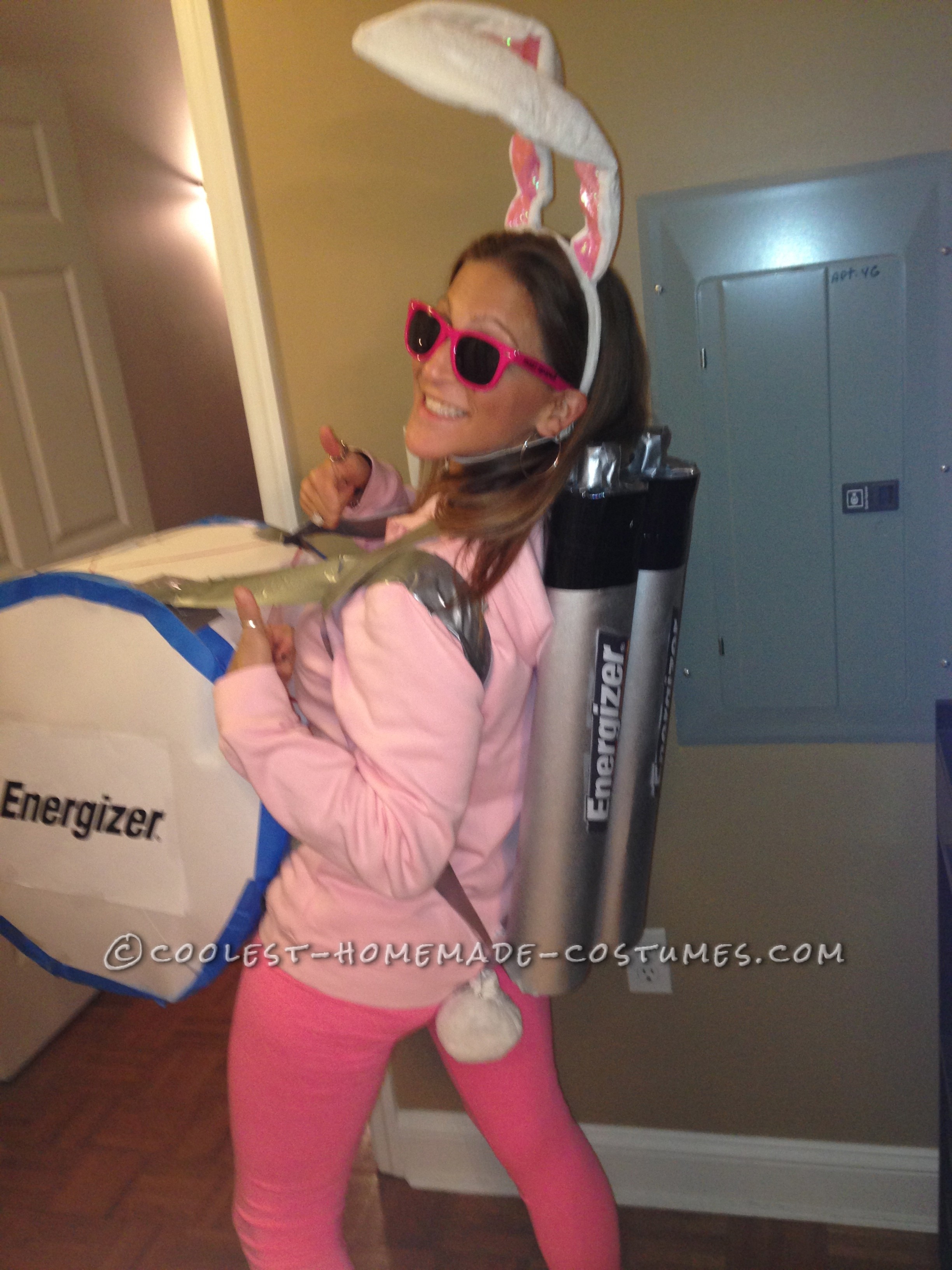 After weeks and weeks of harping on a costume and knowing that it would be hard to live up to my giraffe costume from last year and Oscar the Grouch costume from the year before, I finally settled on what I thought would get a few smiles and settled on Captain Crunch. Not being able to find a blue dress appropriate, I then shopped around for a bit thinking I’d instead be a minion. Fortunately, though seeming unfortunate at the time, I couldn’t find overalls for the minion. I was sitting on my couch trying to look at where I could find overalls when I saw a pack of batteries on my counter and it just hit me that the Energizer Bunny would be the perfect costume. Not only is it anything but sexy, but it also would guarantee a few laughs and also make it pretty large and therefore difficult to maneuver – which is ultimately what I like to do with my costumes. I knew it would be funny and my friends always tell me I have more energy than anyone they know – so I thought this would be a perfect costume.

Given it was less than a week before I had to dress up, I ordered a zip up pink sweatshirt, pink slippers and pink leggings online. I already had a light pink shirt for under the sweat shirt. I purchased the bunny ears and tails at a local Halloween store.

Need 7 poster boards. I knew I wanted them to be extremely large, so a toy drum wasn’t an option (and that was also going to be heavier). I went to an office supply store and purchased 3 pieces of cardboard – one for the top, one for the bottom and one I thought I’d wrap around the drums. I also placed a box in between two poster boards which I had cut into circles for extra support. I ended up deciding to tape strips of poster board between the top and bottom to provide a shell which I then purchased additional poster board to tape two pieces around the circular shell I had created. I then taped another circular piece on the top and the bottom to clean up all of the tape and make it look smoother. I used blue painters tape to add the blue to the drums (which I also had to use regular tape to make sure it stayed). I then used a red sharpy to add the stripes to the drums and printed out a logo for the actual drum.

Need 1 poster board, black and silver duct tape and silver spray paint. I knew I wanted to wear batteries so I cut a poster board in half and rolled the board into two long cylinders.  I then was struggling with the color so I went to a hardware store to purchase silver spray paint. None of my markers were working for the black on top, so another trip to the hardware store (with the batteries in hand) and the guy who worked their suggested black duct tape which I taped across the top. For the top of the batteries, I used regular duct tape which I had taped around leftover cardboard scraps. I also printed out a logo which I used on each.

The straps for both were made out of duct tape.

Overall the costume was awesome and a total hit. I actually went to a post-wedding party in it and the bride tried on the drums, battery pack and bunny ears. The costume was amazing – and I ended up having a ton of people tell me it was the best costume they’ve ever seen. Most people did want to try on the drum and battery pack. It was also really fun dancing in the costume since all I could really do was bounce.

One annoying thing about the night was trying to keep people from not hitting the drums which every single person tried to do. Unfortunately since it was made mostly of paper, I can’t wear it again, but it was awesome for the night. 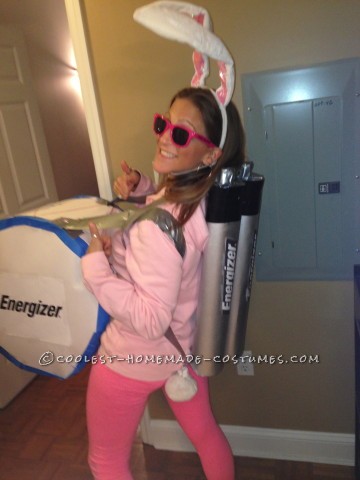