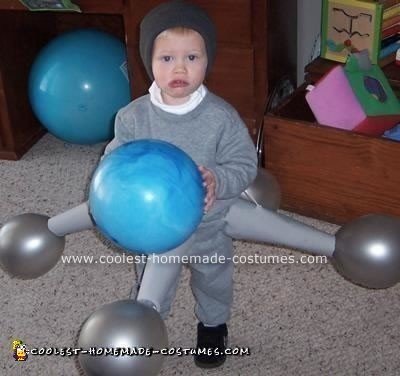 My son’s name is Jack and I like to incorporate his name in his costumes (as long as he will let me). I decided it would be fun and easy to make him a Jack from the game of Jacks.

It was fun but not so easy but now since I have done the troubleshooting it shouldn’t be so hard for you.

I purchased a gray sweatsuit with a gray stocking cap (for a silver Jack). I purchased some gray fabric for the spokes and bought some silver balloons for the tips of the spokes. My son’s feet and head were the spinning tips.

I sewed the fabric into 4 cones for the spokes leaving an opening at the tip and the bottom. I then put magazine pages into the cones to smooth them out. I blew up 4 balloons and attached a piece of string to the balloons. I pulled the string through the cone and sewed it onto the bottom of the cone. I then stuffed the cone with stuffing.

Have your child hold a ball that represents the super ball in Jacks for photos.

2 thoughts on “Coolest Homemade Costumes – Jack as a Jack”