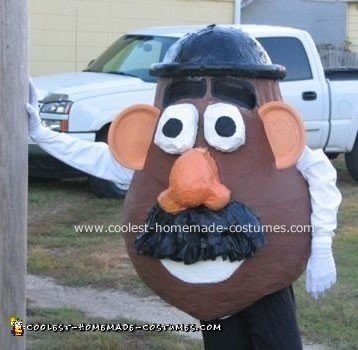 I’m always on the look out for different ideas for costumes and after seeing a commercial for a Mr. Potato Head, I thought that would make a cool costume. I had seen several online and at stores that were made from fabric, but that wasn’t what I was going for.

So I studied the real Mr. Potato Head to see what I could come up with. I love working with Paper Mache, it is easy and you can pretty much make anything you want. I decided that using a large exercise ball would probably work for part of form and a smaller size ball (little larger than a basketball) was used for the upper part of the form.

I taped the balls together making sure that the air escape was easily accessible from the top and bottom. I then covered the balls with cellophane wrap so they would not be damaged by the paper mache. There are several recipes for paper mache on the internet and I chose one that required heating. I put approximately 8 cups of water in a pot and heated it to boiling. Meanwhile, I put 2 cups of cold water in a bowl and added about two cups of flour, stirring well until all lumps were gone. Once the pot of water was boiling, I slowly added the flour mixture and stirred until slightly thickened. We are a recycling family and I had a bunch of old newspapers ready for recycling.

I tore them into strips (they tear better from top to bottom) that were manageable to work with. I would dip a strip of paper into the flour/water (paper mache) and place it on the ball. I continued the process layering the wet strips of paper criss-crossing the layers to make the form more structured. I only covered the bottom ball a little more than 3/4, leaving the bottom portion open for a body to enter.

Once the ball was covered I let it dry for 48 hours and applied another layer. I did this three times, always leaving the air escape for the ball on top, free from paper mache. Once my final layer of paper mache was done, I deflated the bottom ball and the top ball and removed them from the form.

Next I made the nose of the Potato Head costume. I used a 9 inch balloon and blew it up most of the way, then used two more balloons and only blew them up a small bit. I taped the small balloons on either side of the larger balloon and paper mached the balloons to my original form (using the same techniques as before). For the eyes, I wadded up several newspapers and formed them into a ball-like shape and paper mached them onto the original form as well. The mustache was also made from the newspapers. I rolled them up long-ways and folded them in thirds and taped them under the nose, then covered the top and sides of the mustache with paper mache to make it stay on the form.

The ears were last and I must say the easiest. They were simply made of paper plates and popsicle sticks. I put two paper plates together (facing the same way), cut them to fit to the form and glued popsicle sticks to the inside of them to be able to put them into the form. Once everything was completely dry, I began to paint.

I started with the mustache and the hat and spray painted them gloss black. I used spray paint to get into all the paper folds of the mustache. I also used a brown spray paint on the body of the potato. I sprayed only about 4-5 inches away to help control the spray and only did short sprays at a time. I tried to keep the brown off of the eyes and nose and the ears were not attached at this time.

Now it was time to figure out how my child would see where he was going and how he would move. I slipped the form over his body and estimated where his eyes were and where his arms would be comfortable. We weren’t sure about the eyes and thought his eyes were located too high and up towards the hat, so I put a doubled over piece of 2 inch foam in the top of the hat (also making it more comfortable to rest on his head) and that put his eyes just where I wanted them, in the eyebrow area. I used a steak knife to cut through the paper Mache making eyebrows and arm holes. I taped a piece of leftover screen (from a screen door) to the inside of the eyebrows and made the arm holes long ovals so that he could have more motion. I then cut two small slits just beside each of the eyes so that I could put the ears in and if he wanted could pull them out to show everyone that some parts were removable.

He put the final product on with a white long sleeved shirt and white men’s gloves (purchased at Party America), black wind pants and red converse tennis shoes. I was concerned that people might not recognize the potato head costume, but I have had no problems so far.