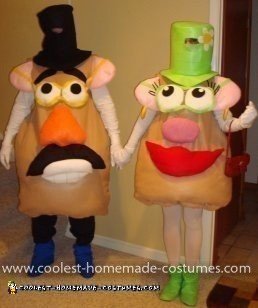 My husband and I decided to be Mr. & Mrs. Potato Head for a costume party that we attended for Halloween this year.

For the bodies of the costumes I purchased tan felt. I then used a t-shirt of mine and his to use as a pattern to mark where the neck area and arm holes would go and then made the rest into a potato shape. I cut this so now there were two pieces for the body. On the inside of each piece I sewed a panel in the middle, out of the same tan felt, (this became a pocket) which was eventually stuffed with batting. I then sewed the two pieces together at the shoulders and down the sides leaving room for the arms. At the bottom I sewed in an elastic casing. I did all the same for Mr. Potato Head except his costume was a little bigger and longer.

For the hats I used a pattern I already had for an Abraham Lincoln costume but made the circumference of the hats bigger so that instead of sitting on our heads it fit over our faces. I then cut holes in the front to see. I attached a homemade felt daisy to Mrs. Potato Head’s hat. We always like to attend costume parties incognito but, we knew that we wouldn’t want to wear these hats on our faces all night (too hot and too hard to socialize) so we also brought along extra hats to wear on our heads after taking off the face hats. They were both derby style (Mr. Potato’s was black and Mrs. Potato’s was white with another daisy attached). We called this our B costume.

For the body parts I looked at pictures of Mr.& Mrs. Potato head online and purchased the appropriate colors of felt. I first used newspaper to make patterns for all pieces. I cut two of every piece and then sewed them together leaving just a small unsewn area so I could turn it inside out and stuff them with batting. I sewed the unstitched area by hand. I hand sewed all the pieces to the body. The glasses were not stuffed and they were hot glued on. I made Mrs. Potato Head’s eyelashed out of pipe cleaners and hot glued those on. I made covers for our shoes. This had elastic at the top to stay on our legs and they fit right over our shoes.

We both wore long sleeve white shirts underneath and white gloves which we already had. Mrs. Potato had on white tights and Mr. Potato had black sweats. We had a lot of fun wearing these Homemade Mr. & Mrs. Potato Head Costumes and got many compliments and we also won the prize for best couple. 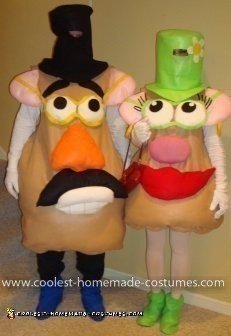