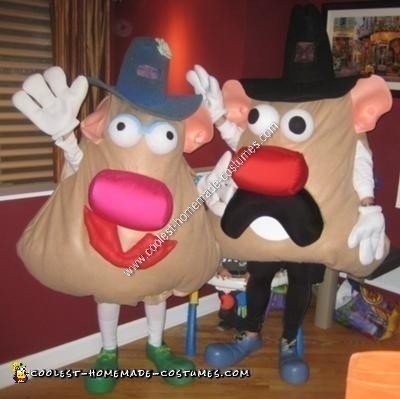 I made the potatoes by cutting out 2 large pieces of potato shape out of felt, and then cutting 2 similar shapes out of cotton, to make the lining. I layered the four pieces together in the following order – cotton lining, felt, felt, cotton lining, and then stitched them all together, leaving openings for the head, arms, and legs. Then I turned the whole thing inside out. The trickiest part was to put the arm holes lower than you normally would if you were making a shirt. This is important, so that you have space to put the ears on ABOVE the arms. Many potato head costumes that I saw had the arms coming out above the ears, which makes no sense.

I stuffed the potatoes with 2 bags of fiberfill, and then stitched the lining closed. Voila, a potato!

All of the facial features were attached with Velcro. I used “squishy” pillows from Bed bath and Beyond for the noses and mustache, but you could easily make these shapes from felt and fiberfill. I did make Mrs. Potato Head’s lips myself with red felt and fiberfill. Mr. Potato Head’s teeth is simply a round flat piece of Styrofoam (from Michael’s craft shop) that I cut in half to make a half circle shape, and then I scored it with a knife to make grooves that look like “teeth”. The eyes are Styrofoam balls with the backs trimmed so that they would sit flat against the potato. I hot glued black felt for the pupils, and blue felt for Mrs. Potato Head?s eye shadow. The funniest part were the ears ? those were fake breasts from the Halloween costume store, cut in half, and sewn onto each side.

The hats were the trickiest. Mrs. Potato Head’s hat was purchased from a costume store, and then a hole was cut out so I could see, with blue mesh stitched over the hole. I attached a simple foam flower. I couldn’t find a hat big enough for Mr. Potato Head, so I ended up making it out of foam rubber. I cut a donut shape for the rim, and then stitched a “tube” of foam rubber to the rim. I then stitched the top of the tube shut, and then covered the whole thing with black felt. Then I cut out a hole for Mr. Potato Head to see, and covered the hole with black mesh.

Finished it with cartoon hands and clown shoes from the costume store. I ran out of time, but if I had time, I would have sewn a flap to the back as a pocket to store extra accessories, like glasses and extra noses.

These were a big hit, a lot of people took photos of us in our costumes. We could swap noses and mouths since they were all attached with Velcro. Mr. Potato Head’s eye fell off but then my husband just walked around with the eye in his hand, and he became “Zombie Mr. Potato Head”.