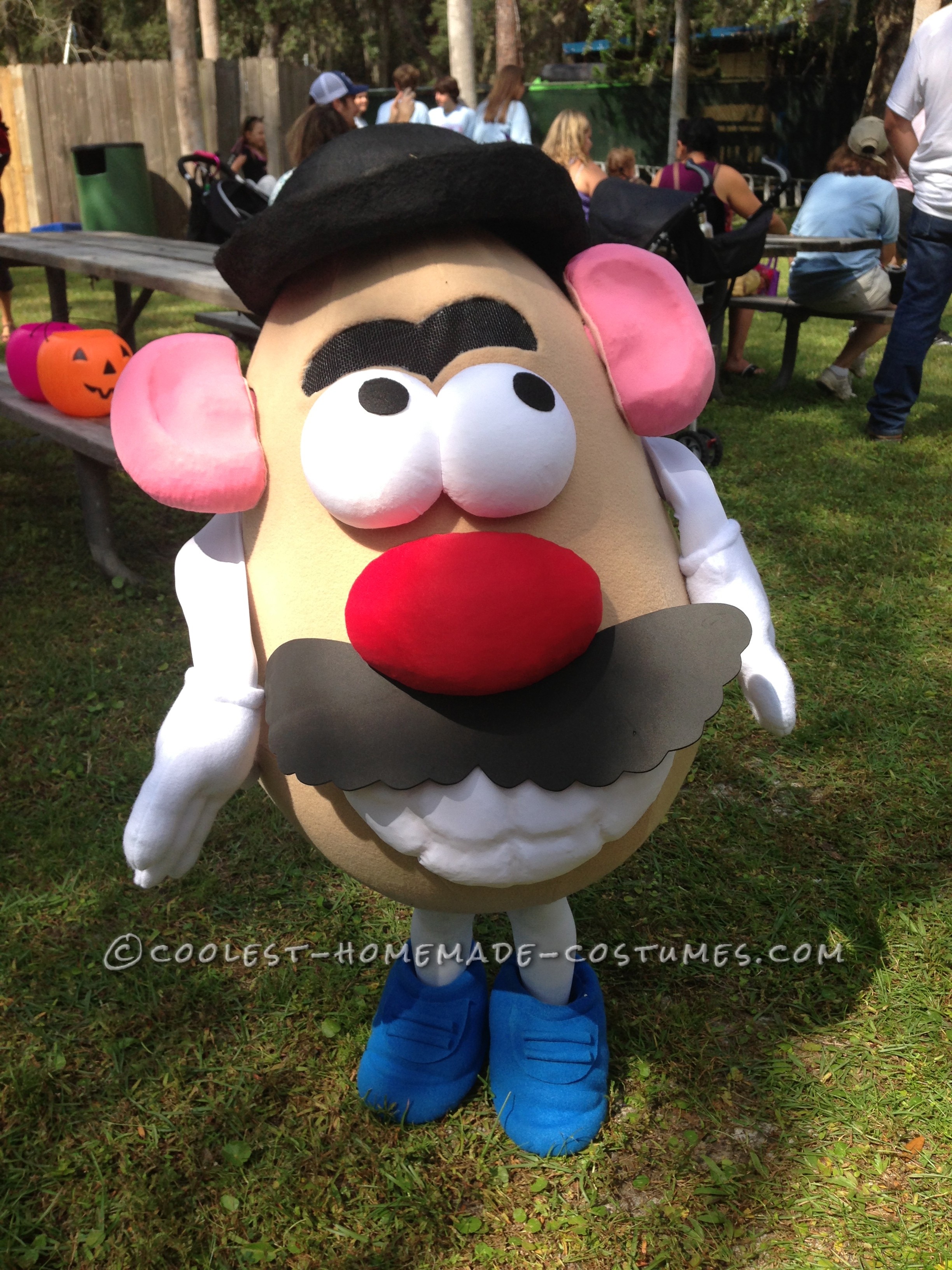 We’ve over the years amassed a pretty large collection of Potato Head parts which our youngest daughter loves to play with so we thought it would be neat to make her a Mr. Potato Head costume for Halloween.  Of course what’s the point of having a giant Mr. Potato head if you can’t play with it like the real thing?

We began by first taking a pattern off a real Mr. P toy by wrapping it tightly in a plastic bag then wrapping that in a few layers of packing tape.  This creates a rigid shell that holds its shape when cut off the toy.  The next step was to cut this shell into pieces until it layed more or less flat.  This gave us our original pattern.  Then, using a grid technique, we enlarged the small pattern pieces up to the size we needed to fit our daughter.

We used this large pattern to cut the pieces out of 1″ green upholstery foam which we then assembled using Fabric Tack craft glue.  We then needed to cut a large hole in the bottom of the form for our daughter’s legs to stick out plus a slot for her to see out of.  Next we located and cut smaller holes that would eventually accept the pegs from the various accessories we would build.

The next step was carving all the accessories.  Most of the pieces were carved from Styrofoam These Styrofoam pieces were then covered in appropriately colored fabric and had a cardboard toilet paper tube glued on to the back.  Then the tub was painted to match the fabric and finally a coordinating colored piece of felt was glued onto the back, around the tube to cover the remaining exposed Styrofoam.  The mustache, which was a flat piece was simply cut from a piece of black craft foam.  His hat was created using a specialized fabric know as Foss Shape, which can be cut and sewn like normal fabric but then becomes rigid when heated.

The last step was to cut basically a large potato-shaped pillow case out of brown polar fleece to cover the green foam.  This was tacked into place around the various openings but otherwise just floated over the foam base.  We added a elastic pocket onto this brown fabric in place of the butt flap on the real toy to hold extra pieces like the tongue.

This costume has been a huge hit.  Being able to play with the costume like a real Mr. Potato Head toy is just the coolest thing ever.  We’ve joked that as long as the potato fits her, we could  just continue to use this costume and create new accessories each year! 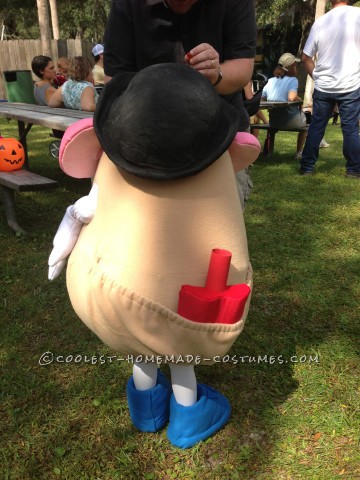 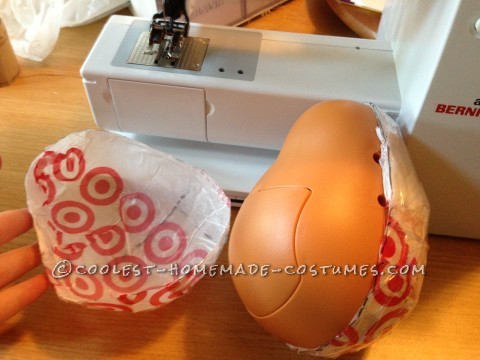 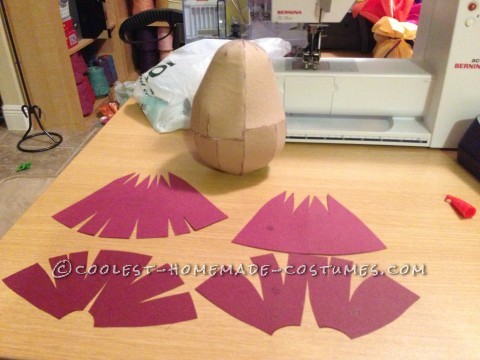 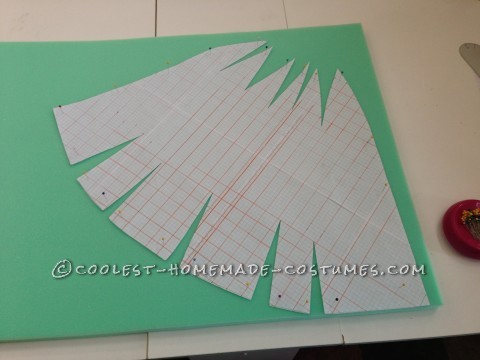 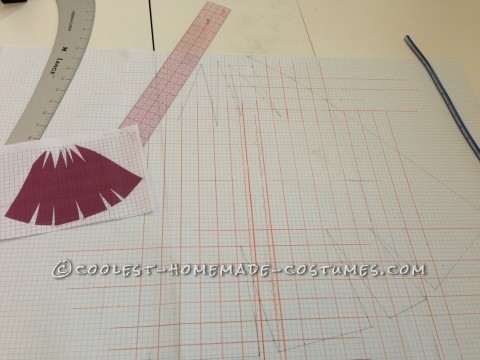 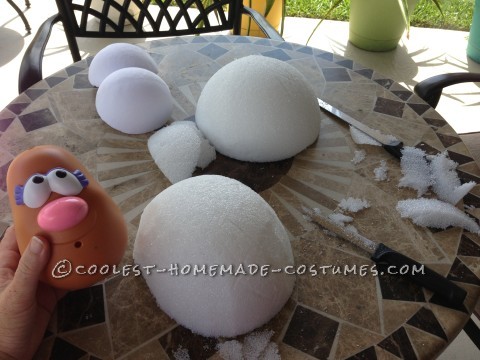 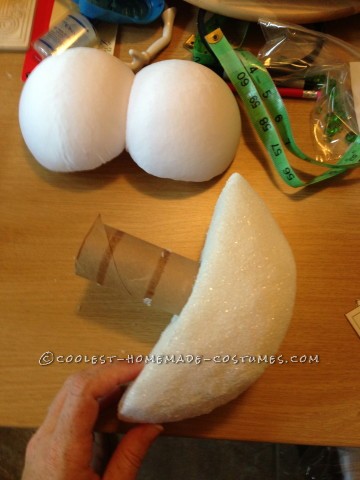 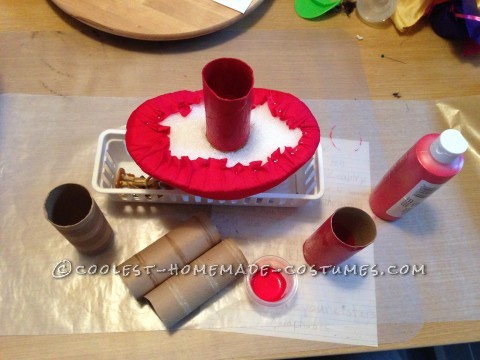 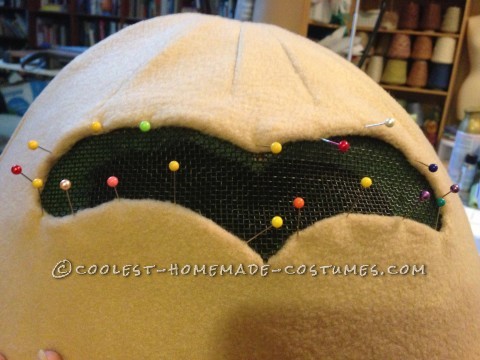