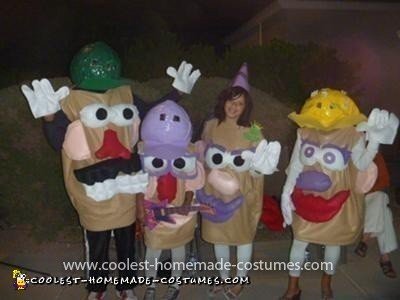 This year we decided to be the Potato Head Family (Mr. Potato Head, Rockstar Spud, Princess Spud & Mrs. Potato Head). It ended up being a big hit and the little kids Trick or Treating wanted to meet Mr and Mrs Potato Head =).

I purchased 2 yards of brown felt per costume for the Potato body. Didn’t have a pattern to go by so I drew a rounded shape. I measured the width of our shoulders for the top part and left the middle very wide. I also used an old sheet to line the inside of the costumes so they could be stuffed. We did not stuff them in these photos but they could be.

From the top I sewed in about 4 inches on each side and left the middle open for the head. On sides I left about 10-12 inches open for arms. I left the bottom unstiched for the legs but did fold bottom of fabric up about 1 in. and stitched in case we decided to feed elastic through the bottom.

For body parts I Googled potato head parts and drew a pattern from scratch to follow when I cut out the felt. Made the cartoon gloves drawing my own pattern too and gloves are lined inside in case we decided to stuff them. I stuffed the body parts with polyfil.

After I stuffed them I also ran a loose stitch through the mouths and mustache to create the line through girls lips, make the mustache stand out more and create teeth for Mr. Potato Head.

For the ears I lined the inside of felt with paper plates so they would stick out. I did not stuff the ears. I also used craft foam for the glasses. I hot glued the pupils on eyes and for Princess Spud and Mrs. Potato Head I also cut out felt for the eyeshadow and eye lashes and hot glued onto eyes.

We used sticky back velcro to velcro body parts on body. Had to use about 1 yd of velcro per costume and place several pieces of velcro to parts.

For the princess cone shape hat we used poster board, shaped it, trimmed it at the bottom & stapled it. Used the thin rounded shape elastic at bottom of hat to place under chin. I also used 1/4 a yard of tulle fabric, tied a knot at one end and put it through the hat with knotted end inside the hat.

For the big hats we made them out of paper mache and used punching balloons. Blew them up really big and did about 3-4 layers of paper mache over half of the balloon. Used white computer paper for last layer of paper mache instead of newspaper. Took a day to dry and then we spray painted them with glossy paint.

We used craft foam for the bills of the hats but Mrs. Potato Head’s hat has foam going all the way around like a woman’s hat and we hot glued daisy flowers on her hat. We put the hats on our heads to get the right fit and then hot glued baseball caps to inside of hat so the oversized hats would not roll around on our heads. Bought the baseball caps really cheap at Hobby Lobby. We also cut out holes for our eyes and lined holes with tulle fabric. 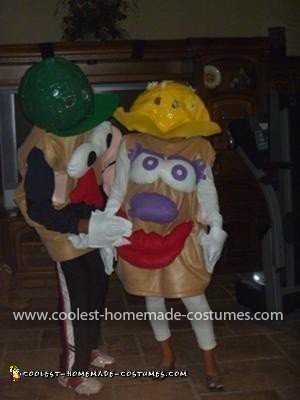 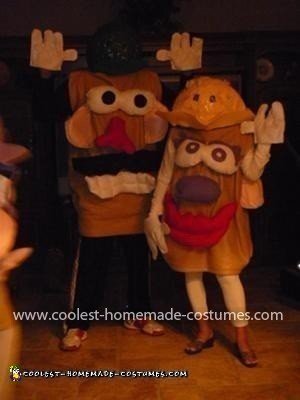 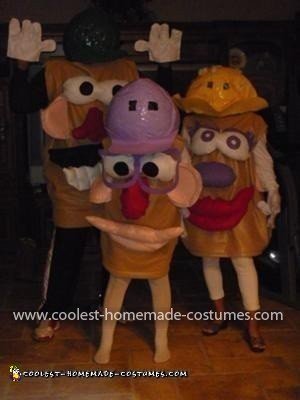