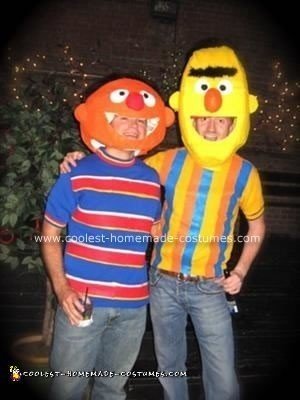 After being inspired by Sesame Street costumes we saw posted here on your site, we decided to make a Bert and Ernie couple costume this year. I wasn’t exactly sure how to go about it as I never made a mask before. So we took a trip to Michael’s. We wanted to see if any ideas might suddenly occur to me whilst perusing the aisles.

As luck would have it, we happened upon the “crochet” aisle and saw a bunch of those wooden crocheting hoops that looked to be exactly the right size and shape for Bert and Ernie’s heads! Even better, they were only a couple dollars each. So we bought 2 of each shape (so we could criss-cross them to make a 3-dimensional head).

We then picked up some wire-mesh type stuff to mold around it, and then a couple rolls of that pre-made paper mache stuff to wrap around the entire thing. We then bought a ton of felt and a couple cheap feather boas (for the hair/Bert’s eyebrows…er…eyebrow) and a couple of Styrofoam ball/circle shapes to make the ears and noses.

After the paper mache dried, I glue-gunned the felt to it (burning myself a couple times in the process, not gonna lie), and cut out the shapes for the eyes. After that, I cut the mouths out big enough for us to see/drink (ha). Then I glued the rest of the facial features into place. After that, I cut out/glued strips of felt to our shirts to look like Bert and Ernie’s sweaters. I stuffed some pillow stuffing in a pillow case into the top to keep the heads in place (not to mention waaaaayyyy more comfortable! Bonus!).

Finished it off with jeans, converse, and a rubber ducky. I think our Bert and Ernie couple costume turned out pretty awesome! The best part is that the whole thing only cost about $45! 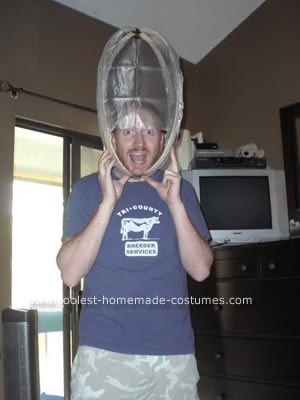 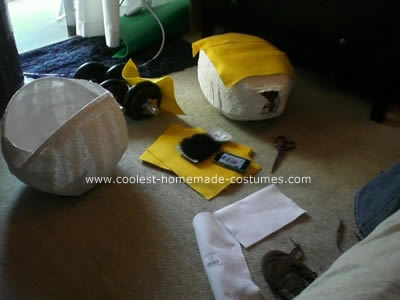 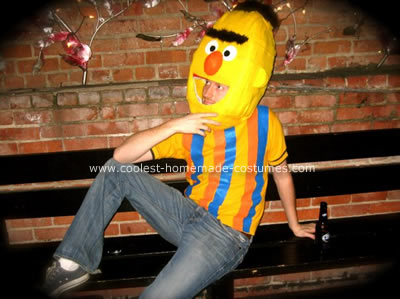