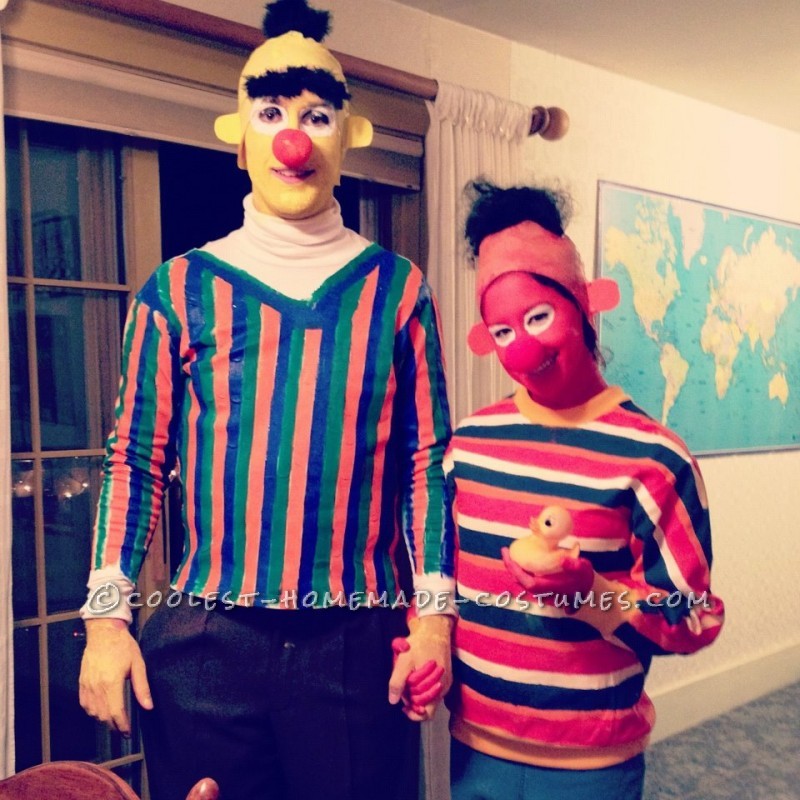 My girlfriend and I had one heck of a time figuring out what to be for Halloween this year. We both love Halloween. I wanted to do my own thing, she wanted to do a couples costume. We couldn’t agree on anything… until we thought about the most loveable best friends from our childhood- Bert and Ernie costumes.

We searched on Google to see what techniques people had used. We were delighted to see that none of the costumes on the Internet did the characters any justice. We looked at it as a challenge, and knew we had to nail the costume. We were determined to set the bar for future Bert and Ernie’s!

The first step was making sure the shirts looked identical. Every photo we saw online had a random shirt, many not even close to what the characters actually wear. Since we are all about homemade costumes, buying the costumes directly was not an option. Therefore, we had to spend a taxing amount of time creating the shirts ourselves- by painting every single line!

This was one of the most difficult parts of the costume. We used plain white and yellow long sleeve shirts from Goodwill. We then taped the entire shirt using painter’s tape, and individually painted each line to ensure it would look crisp and straight.

For the head, we bought rubber “bald caps.” We tried to dye them using food coloring, but that strategy did not work. Instead, we used body paint, which took forever to dry.

We also used body paint for our faces. To make our eyes more cartoonish, we put black eyeliner on our eye lids with a white circle around the eye. When our eyes were closed, it looked as though we had black pupils and big white eyes. We then carefully painted the appropriate yellow and orange surrounding the eyeballs.

For the hair, we cut holes in the top of the cap, and put black hair out the top using a fluffy boa and hair from a zombie wig. “Ernie” used a barrette underneath the rubber cap to keep her hair in place. I simply used a clump of hair bunched in the top of the cap, which also looked like a longer, more Bertlike head. I was also able to super glue my eyebrow right onto the cap. I used a fluffy boa for the legendary uni-brow. The ears are simply colorful foam super glued to the side of the rubber cap. The rest of the materials are just the right kind of clothes. A white turtleneck, dress pants, and Ernie’s jeans complete the costume.

We received wonderful reactions to the costumes we worked so hard on. At times, especially during the lengthy shirt-painting process, it was very frustrating, so it was really nice to get such great feedback. When we went to a friend’s house for a Halloween party, we were voted “Best Costume.” Coming from friends that go all out just as we do, it was an honor!

Thank you for the opportunity to be in the contest. Vote Bert and Ernie 2012! 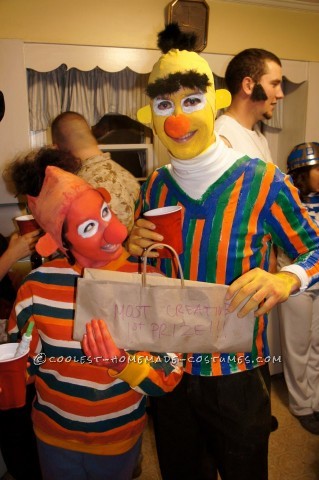 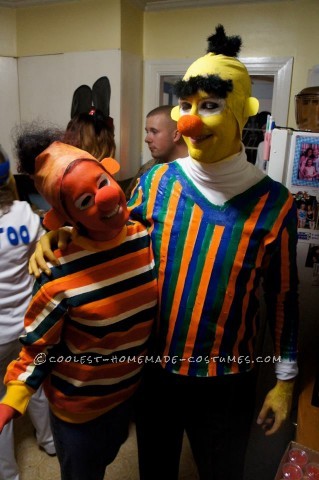