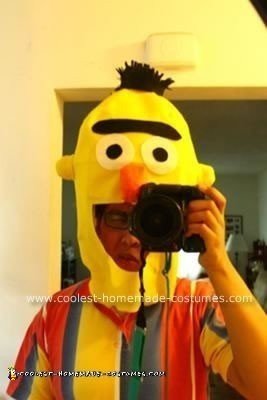 I’ve always wanted to do a BERT costume because, well, everyone usually call’s me Bert so why not!

I googled ‘Bert costume’ and found this awesome website. Looked through the other submissions to get a Bert Unique Halloween Costume Idea, how to make and instantly set off to buy supplies

Bought everything from Joanne’s (THANK YOU!)

The skeleton of it is wire wrapped in paper (it is supposed to be used to hold up flowers and such). Came in a 6 pack and I bought 2 (later I would use wire from some wire hangers just because I didn’t have time to go back to Joanne’s).

Bought 2 yards of yellow felt and found that they also sold small 9×11 sheets of felt. I bought 2 sheets of black, one sheet of white, and one of orange.

I did use some needle & thread to hold down some folds a little better, but almost everything is held together thanks to my trusty hot glue gun.

Finding a top was the hardest part! I saw in another submission that they took felt and stuck it to a shirt. That was my last resort. I looked in almost every nearby thrift store for a shirt with Orange/Green/Blue/Yellow stripes; No luck :(
LUCKILY I dug through my uncle’s closet and found a polo shirt that was pretty dam close. It was also Friday, a day before the party. I was saved! haha

I started making the costume on a Saturday, and the party I was going to attend would be the following Saturday. It literally took all 8 days. I kept making adjustments to make sure that it would fit me and be proportionate too. I finally finished it the afternoon of the party.

If I honestly had more time I would of taken more time to properly wrap the head itself. The completed head had lots of folded over felt which I really didn’t like at all. It was alright because no ever really commented on it, haha. I might redo the whole thing just because I want it to look a bit cleaner. None of my friends wanted to be Ernie, BUT at the party I found other Sesame Street costumes.

If you’re planning on doing a Bert costume, GO FOR IT! Homemade is the way to go! Way cheaper too. All in all the head cost me about 15 bucks. Compare that to a 50$ Bert costume! 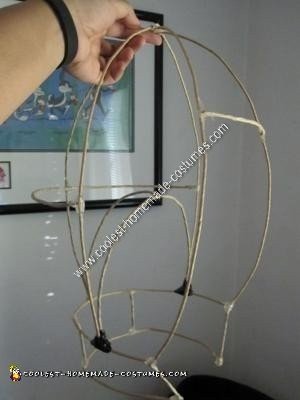 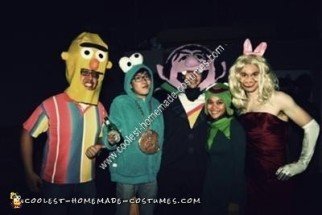