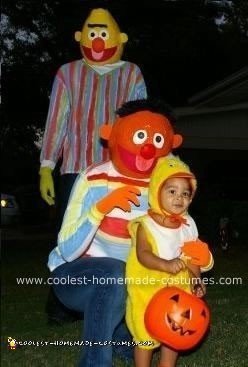 I wanted to find the perfect outfits for my boyfriend, son and I for Halloween, so I came up with Bert & Ernie. My son loves Elmo, so he was supposed to go as Elmo in a costume my mom had gotten for him. However, the costume was too heavy for him, and he hated the head piece, so I had to think of something different… I decided he would be my little rubber ducky since I was going to be Ernie!!!

I thought about purchasing the Bert and Ernie costumes online, but when I saw the prices I decided to make my own. I used paper mache over giant balloons for the head pieces. Cut out construction paper for the eyes and mouths, and used half Styrofoam balls for the noses. I actually shaped Bert’s into an oval and Ernie’s was a perfect half circle. I spray painted the heads and our hands were covered with yellow dish gloves and orange safety gloves.

The hair came from a gorilla hand puppet I found at a thrift store for 50 cents. For the shirts I found some white long sleeve shirts/turtle necks at a local thrift store and painted the stripes on. My boyfriend wore a pair of dress pants and I wore jeans to complete our outfits. In total our outfits probably cost $10 altogether.

For my son’s costume, I wanted to make it as well, but ended up running short on time. I bought the duck costume and added orange tights. I also added Velcro arms made from a fleece sweater in case it got cold, but it never did. So he never actually wore them. He actually ended up taking off the tights as well because it was really warm.

People kept stopping us on the street asking where we got the costumes, and I was only too proud to tell them I made them! Some people got the rubber ducky thing right away, but most of them ended up calling him Big Bird… or Little Big Bird. Either way the homemade Bert, Ernie and Rubber Ducky costumes were a SMASH HIT!!! 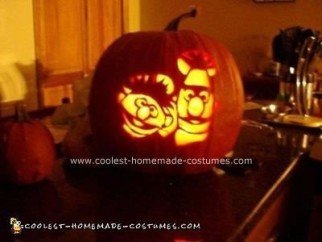