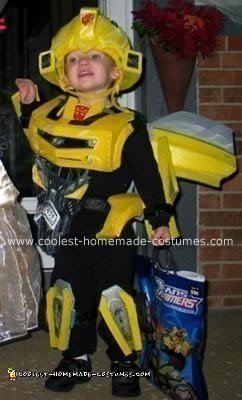 My 3 yr. old son loves Bumblebee the Transformer, so my wife and I started looking in stores for a Bumblebee Transformer Halloween costume to buy, only to be horribly disappointed in the quality of the costumes available. I had made his costume last year, but used foam core board and I wasn’t convinced this would be the right material for Bumblebee.

After exploring on-line a bit, I saw that someone else had used blue camping foam for the basic structural material, and I knew that was the perfect choice, especially since 1 roll was only $6.

I started the second week in October so I knew I couldn’t afford any mistakes. After having made my son’s first costume way too big last year, I decided to trace around his body on a large sheet of paper and take various measurements of him before I began. This costume is a hybrid version of my son’s bumblebee toy and the bumblebee in Transformers the movie. I drew the main elements onto his outline and used tracing paper to cut out patterns so I could transfer the design to the camping foam.

I used an x-acto knife to do all the cutting, and a hot glue gun for the construction. As I worked, I discovered that I could achieve very realistic looking car body parts, such as the doors, by holding the blade and a 45 degree angle and cutting a “V” out of the back side, which enabled me to bend the foam and “weld” it with the hot glue. This gave this costume a very dimensional look. I also used the same technique to create the relief of the various robot parts in the abdomen section. In some areas I cut small sections of the foam’s thickness in half to further allow for detail. Keep using a sharp blade, or it will start to tear the foam and create fuzzy edges.

We knew friends and family would want to see his expressions so I decided not to cover his face. I used an old bicycle helmet as the support and again added the blue foam for the overall shape. I knew this part of the costume would be a bit out of proportion, but for a 3 yr. old, it added to the cute factor.

To connect all the pieces to his body, I made 1 ½ inch straps that I glued to the back of all the pieces so they could wrap around his arms and legs. The chest piece and back wing sections were held together with straps over the shoulders and one around the waist. I hot glued Velcro to the foam to secure them in place, but if I were to do it again, I would also sew it to the foam, as it started coming off at the end of the night. We had to put his costume on and off quite a bit due to the car seat.

For the finishing touches, I first used spray paint, but later found it started to fleck off as the foam flexed a bit, so I started to seal the spray paint in with acrylic medium (Mod Podge). This not only protected the paint from the flexing foam, but also gave it a nice gloss luster and helped fill in the porous edges. Detailed areas were brushed on with acrylic paint. The autobot decals were created by printing off scaled images from the internet, cutting out the background, painting it red, and connecting it with Mod Podge.

His costume consisted of 96 separate foam pieces and used 1 ½ rolls, 2 cans of yellow spray paint, about 5 coats of Mod Podge, and was held together with approximately 10 feet worth of hot glue sticks. Including the black sweat outfit, it was still cheaper than the $30 Wal-Mart / Target Bumblebee costumes. And even after my son fell flat on his back, the costume held together perfectly. 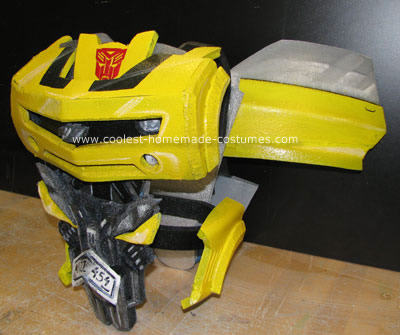 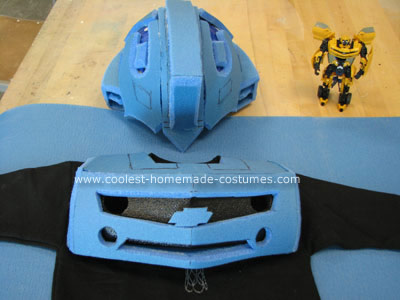 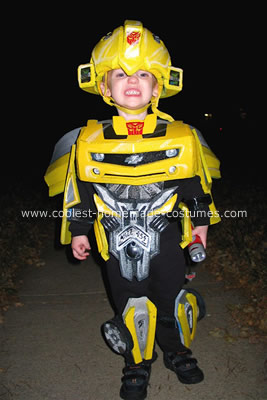