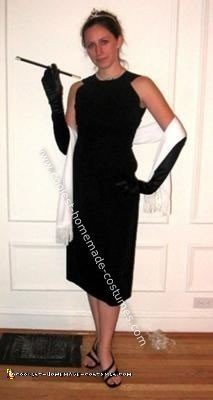 Like most girls who’ve been exposed to Audrey Hepburn at a young age, I became obsessed with Breakfast at Tiffany’s, particularly with the sheer elegance of the character (and her enviable wardrobe). Being a brown-eyed brunette myself, dressing up as Holly Golightly “someday” had long been a plan of mine.

Finally, I got my chance for a Breakfast at Tiffany’s Homemade Costume. My second year of college, I had a roommate who had THE dress. The perfect, Little Black Dress I could wear as Holly Golightly. It was a vintage piece she picked up in CA, where she’s from. She agreed to let me borrow it, since it fit me nicely, and the rest of the costume came together easily from there.

When I was 12, my grandmother had bought me the Audrey Hepburn Breakfast at Tiffany’s Barbie doll, and that was what I looked to in taking my cues for what the costume required. I picked up the tiara ($12) and cigarette holder ($3) from a costume shop, both of which were essential to making the look work.

The necklace (which you unfortunately can’t see very well in the picture) was another borrowed bit. It’s a costume piece, three strings of faux pearls attached to a jeweled brooch in the center, much like the necklace Hepburn wore in the movie.

The shawl was particularly dear to me, since a friend’s mom had made it for me a few years ago. The gloves and the wrap were both leftovers from my high school formal days, and the shoes were my standard, black, all-purpose heels.

I’ve never put together such a costume so easy, classy and easily-recognizable. It was a huge hit!