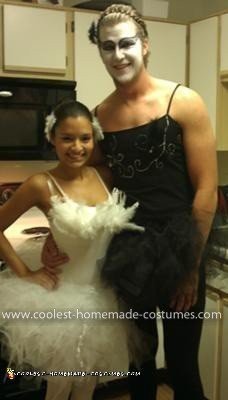 This is what you will need to make a Homemade Black Swan Couple Costume:

Black Swan Preparation:
For the black swan we decided that the less feminine of the couple should take the role, which would make the costume pair more comedic. Starting off with the feet, we bought some black slippers from the store, some black leggings since panty hose in this case would be too revealing, and of course the tutu. The tutu was made with about 7 yards of black tule tied onto some elastic. In order to do this, I logged on to Youtube to figure out how to make a non-sew tutu. The tank top was also bought at the store and was detailed with silver glitter glue and black feathers with jewels. The feathers and jewels were glued on with fabric glue and hot glue. The beret in the hair was a simple hair clip that had jewels and feathers hot glued to it. A headband was put on to keep his hair from his face to try to give a “slick back” look. The face was simply covered in white face paint and the eye design was mimicked from the original makeup from the movie using eyeliner.

White Swan Preparation:
The white swan was a little less time consuming. The slippers and panty hose were bought at the store, as well as the tutu being made the exact same way as that of the Black Swan. The tank top had quite a bit of feathers glued onto it to give it a similar look to that of the outfit in the movie and to give a “swan” effect. Again, the hair pieces were made by hot gluing jewels and feathers to a bobby pin and then placed in the hair, which was pulled slick back into a pony tail and the hair rolled into a bun. Makeup gave the finishing touch.