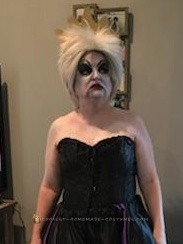 Honestly, this homemade costume was pretty difficult to make.  My mind is creative, but my body and skills just can’t keep up.  I had no pattern, but there are plenty of helpful sites out there that gave me some ideas.  So I got started on my Ursula costume.  It was definitely trial and error.  It was a lot of fun and a LOT of work.

You are just not Ursula without the perfect makeup which took some practice.  Being Ursula was a blast.  I had tons of people come up to me and want their pictures made.  I had so many compliments and it is just so much fun being a Disney character.  Halloween is my favorite.