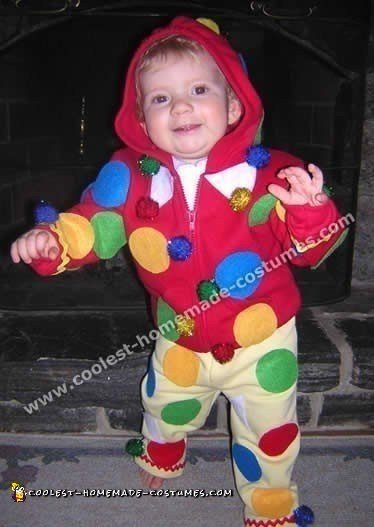 Michelle loved watching JoJo’s circus, but I wasn’t about to spend $30+ on a Disney costume. And the other clown costumes I found were pretty cheesy feeling for the money.

So I made my own clown costume using sweatpants, felt pieces, rickrack tape and pompom balls.

With clown costumes, the more color the better. So I used a different color for the sweatpants and sweatshirt. I also decided on a hooded zip sweatshirt, as I didn’t think my 1 year old would keep a clown hat on her head for an extended period of time.

In addition, I also found some rickrack tape in the sewing department at Walmart, which I thought would add some pizzazz to the costume.

It was a great costume to layer a turtleneck under the sweatshirt for cold night trick-or-treating.  Or she could wear a short sleeve t-shirt for hot kids parties.

She looked really cute and was worth the time and effort I put into it.

If you’re looking for another toddler clown costume, check this one out.

If you make this costume for older kids, I would also add clown face paint and big clown feet covers to compete the look. Maybe I’ll try this clown in a box costume idea when she’s older!