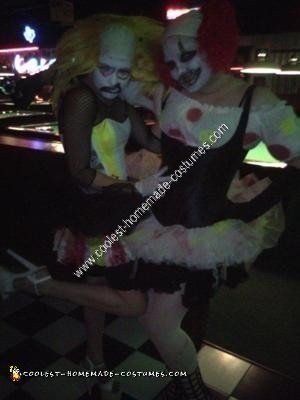 This year me and my sister wanted to be something scary for Halloween and had the idea to be clowns for a while now. People are always saying we look alike on a normal basis so we decided we would do a ‘twin-clown’ idea with opposite black and white pieces. Then we decided that one of us would have stripes on our white pieces and the other polka dots.

For our homemade Twin Clown Halloween costumes we first laid out the plan of which color pieces we would each need i.e. one a black corset with a white top underneath, a white tutu, black petticoat, white stockings and black shoes and vice versa for the other. From there the shopping began we went to various costume shops, thrift stores and even lingerie stores in search of the main pieces for the outfits themselves.

After we had gathered all the pieces we went to a craft store and bought spray-paint in neon yellow and red as well as some blank stencil materials. In making the polka dot costume pieces I used items from around the house to create three various sized circles on the stencil material then carefully cut them out with a craft knife. I took the white tutu next and some pieces of cardboard and started spray-painting a random pattern on the different layers of the tutu (not an easy task with tulle!) by putting the cardboard underneath the material then the stencil on top and just going for it.

I wasn’t too concerned with perfection or evenness with the paint because I figured it would add to the costume’s creepiness if it looked kind of messy. That took about a day alone. Next I measured the peasant top when stretched out and cut pieces of cardboard to fit inside it and make it lay flat. Then took the same stencils and randomly polka-dotted the top as well.

For the striped clown costume we used masking tape and duct tape to create a stripe pattern on a white petticoat which easily lay flat and then spray-painted it. The white corset of the striped costume was one of the most time-consuming of all the pieces. Because we had such trouble finding a white corset for a decent price we ended up buying a purple one which we then had to spray-paint white before we could start the striped pattern. After the white dried we taped off the panels on the corset that were to be left white and painted the stripes on.

When it finally dried and we removed the tape on the white panels it ripped up some of the spray-paint so we had to go back and spray-paint another layer of white on those pieces. For our shoes we decided we wanted to be freakishly tall and have big shoes that went up instead of the traditional out.

My sister is two and a half inches shorter then me and we wanted to be about the same height for the ‘twin’ effect so I ended up with 6″ heels and her 8″ putting us at about a height of 6’2″. We found my shoes at a local lingerie store and hers online. We wanted to continue the striped pattern on her 8″ white heels too so we came up with an idea for them and I very carefully taped a pattern onto both shoes using a little flexible measuring tape and a lot of patience to ensure they were even on each shoe.

After the pattern was created we just covered the rest of the shoe in tape so we wouldn’t get the spray paint anywhere else (see picture). We decided we wanted to have bald traditional clown wigs and my sister found a yellow wig in a local costume store that had been sitting there since 1990 and I ordered a red wig online. From the same website I found the wig on I also bought some fake flies and small mice to put in the hair for added creepiness.

We bought a pair of white-out contacts and a pair of black-out contacts for our eyes and wore one of each to make our faces scarier. For the makeup we hadn’t had any experience with clown makeup and tried a few times to test out some ideas but after cleaning off our faces down to a point of being raw decided we needed a different way. I took pictures of our faces with my phone, emailed them to myself and printed out a couple pages with 16 small pictures of our faces and we used markers to draw ideas onto them. We then took the idea we each liked the most going with a concept that I would have a smile and she would have a frown (continuing the opposite look) and when it came time to wear our costumes used those ideas to create our faces.

I happened to have a pair of long black silky gloves and a pair of short white-lace gloves that we decided to add as accessories. I also had some stockings left over from the past years costumes that I ripped up and used for my costume and my sister cut some leggings up to go with hers. We wanted to look like we had just come out of woods so put on our costumes and tried to go dirty it up in some woods but weren’t too successful and decided to just take scissors and cut the tutus and other pieces to make them look shredded and torn.

Some of the final touches were some ‘nicotine’ colored tooth paint that made our teeth a lovely gritty brown color, white powder to make our exposed bodies even paler and powdery looking, and a very loud horn. The first night we decided to wear the costumes it took us about 5 hours to get everything together and ready but the second night we had gotten it down to just under 2 hours.

When we went out we acted scary by standing uncomfortably close to people and looking down on them if they were short and going up behind people and making weird noises in their ears or just waiting for them to unexpectedly turn around to a big nasty mouth of brown teeth. One of our best Halloweens yet! We had a great time and can’t wait to bring it back out next year. 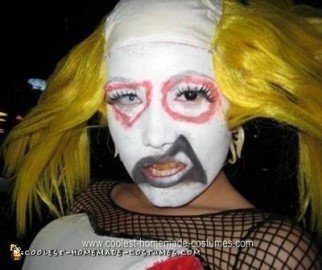 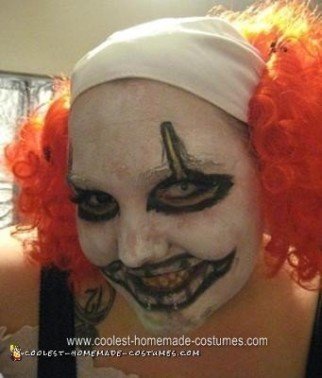 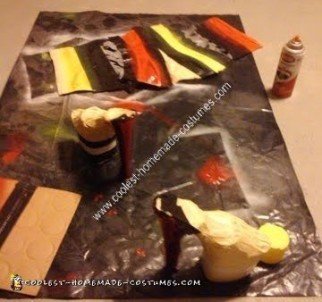