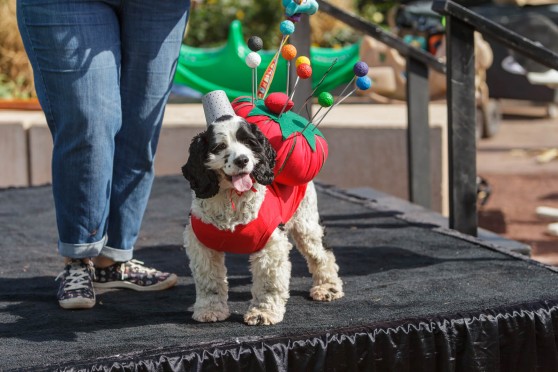 This is my 5th year creating a homemade costume for my dogs.  In all prior years, my dogs’ costumes have been food related, but this year I decided to do something different.  I recently started sewing and decided the perfect costume would be pincushions for the dogs with me being a pile a of scrap … Read more 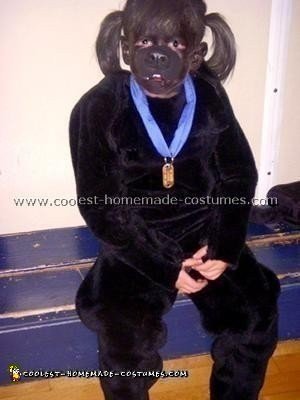 My four year old daughter wanted to be Chevy (our black Labrador dog) for Halloween. At first I wasn’t sure how in the world I was going to pull that off without spending a fortune, but my mom had an old black fur coat that she didn’t want any more. I still wasn’t sure how … Read more 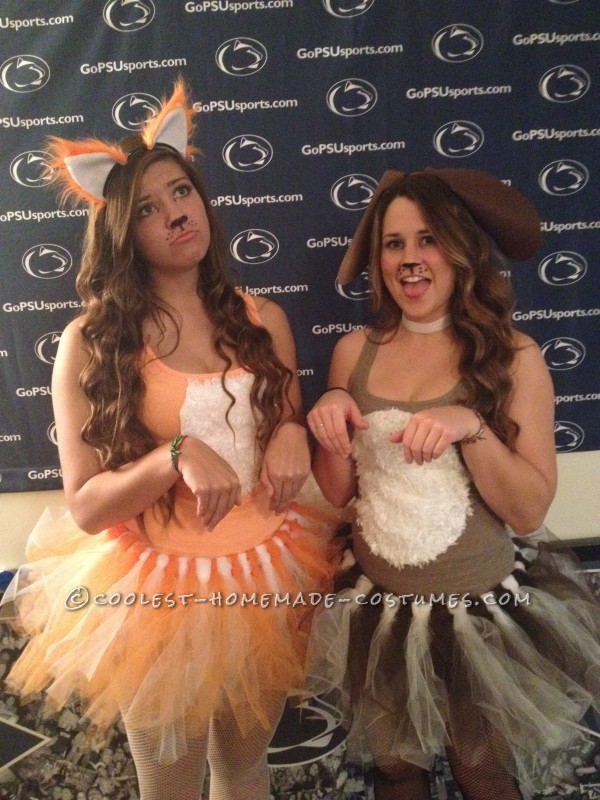 Think back to your childhood. Recall the countless Disney movie classics that evoked every type of emotion we had. One of my personal favorites was the Fox and the Hound. A tale of friendship that overcomes all odds. This was my inspiration in designing a costume for my roommate and I. As two very different … Read more 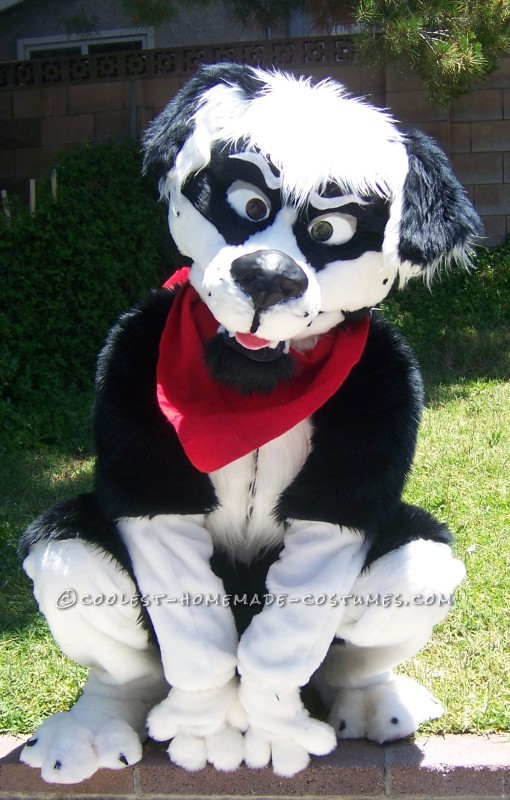 This is my border collie dog costume. I made him for Halloween, but he’s also helped out with adoption events on occasion. Again, much like my Big Bad Wolf costume, I thought it would be fun to be a giant cartoon character, so I created “Blackjack” the border collie Also like my wolf costume, he’s … Read more 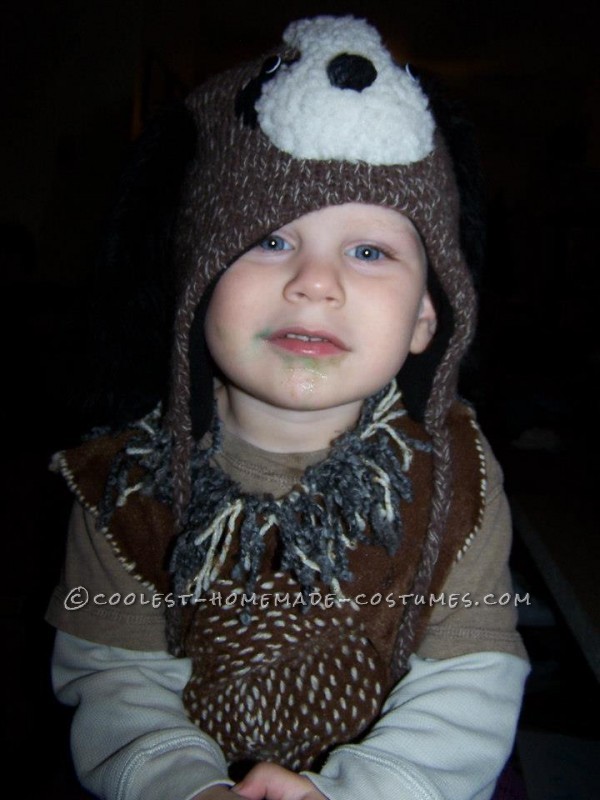 My 2 year old son loves his dog hat, and I couldn’t convince him to wear anything other than his hat for Halloween. I didn’t realize this would be the case until I tried to get him into the outfit I had prepared for him (a dragon costume). So, a couple of days before Halloween … Read more 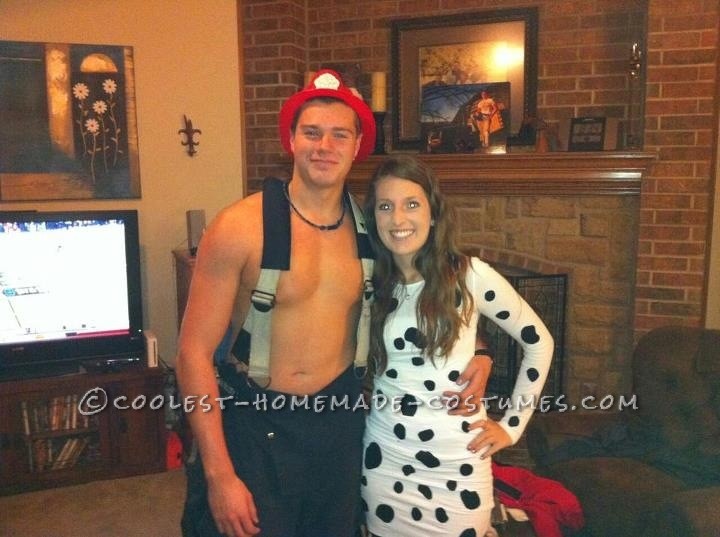 My boyfriend has always wanted to be a firefighter, and well, he likes any excuse to go shirtless too. I on the other hand wasn’t looking for a revealing costume, but still wanted to look sexy and be warm. This Firefighter and Dalmatian couples costume pleased us both as well as everyone at the party. I … Read more 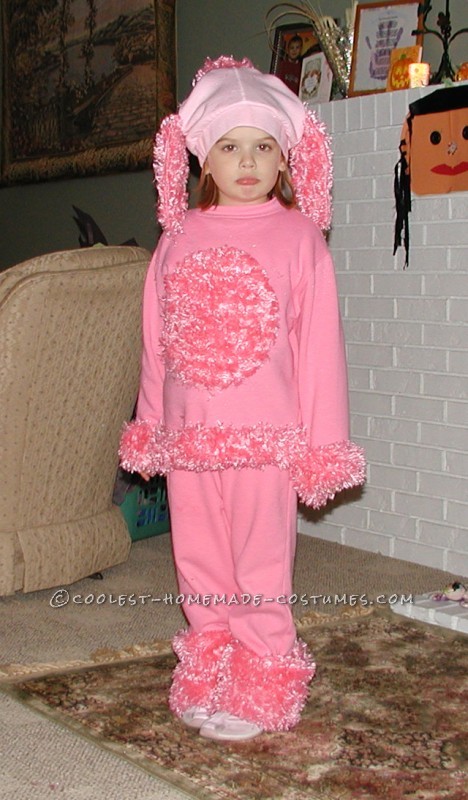 My daughter wanted to be pink poodle. It was much easier than I had originally suspected. We started with one pair of pink sweatpants and a pink sweatshirt, one size larger than she wears. I bought 2 yards of pink “fluff” fabric (I can’t remember what the name of the fabric was.) Last but not least, … Read more 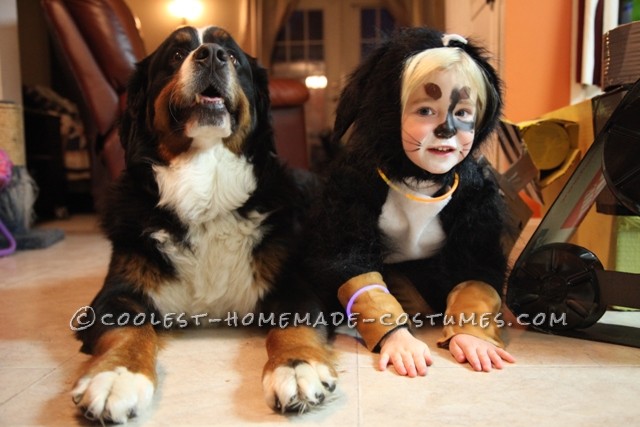 Last Halloween my then four year old daughter wanted to go trick or treating dressed as the family pet, our Bernese Mountain Dog, Berkley.  I thought it was so sweet that she liked him so much she wanted to be him for Halloween.  So I got to work planing in my head how I could … Read more 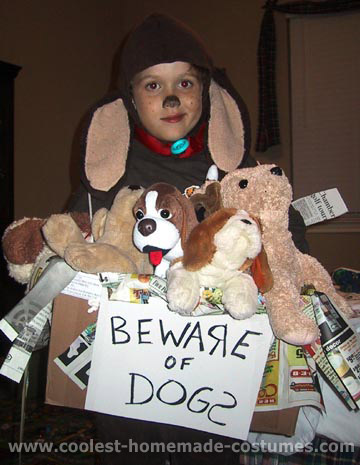 Dog costumes are so cute! With this costume my son won 1st prize at his school. I dressed him in brown pants and t-shirt that he already owned. Next, I made a hood with ears that attached at the neck with Velcro. A grosgrain ribbon was added for the collar. I put a little black … Read more

My roommate and I have been creating our own original costumes for 4 years now and entering the costume contests. We tried looking online for a picture of a hydrant costume (so that we had some ideas on how to create it), but no luck there. For dog costumes you can use an old white … Read more

Because I have twins I tried to think of costumes that would go together, but would also be unique and out of the ordinary. I came up with the idea of a Dalmatian dog and a fire hydrant. I am not sure where the idea came from, but it was fun to do. I simply … Read more 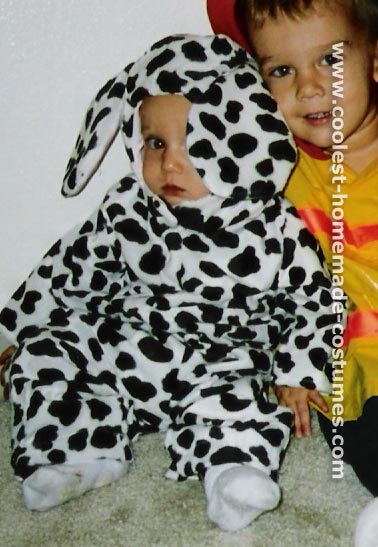 The Dalmation costume was made with a furry fabric and the ears were lined with a soft pink poly/cotton blend. I found the pattern for this costume at our local fabric store. I just made a few modifications (the red ribbon). 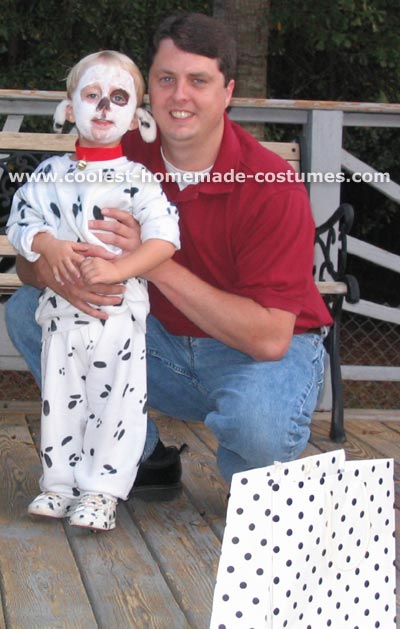 This type of costume is and easy crowd pleaser!! All this outfit needs is about 10 dollars and a little cute munchkin. All you do is buy a white sweat suit, and color black dots on it, I used old white Keds and painted them too. I used an old stuffed animal and cut off … Read more 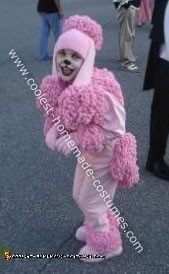 Last year my daughter wanted a Pink Poodle Costume. I’ve always made her costumes (she’s 8 now). While in Target I saw these “curly” scarves. And I knew they would be great for the curly fur of the poodle. I bought pink sweatshirt and pants. And a pink knit cap. Made long ears and the … Read more 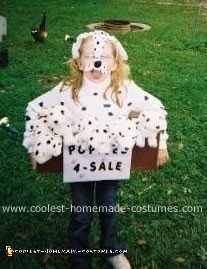 This pick of the litter costume was a fun costume and very easy to make. I went to the dollar store and found a bunch of stuffed puppies and a Dalmatian mask. I took one of Savannah Rose’s white turtle neck shirts and colored Black spots all over it. I cut out the bottom of … Read more 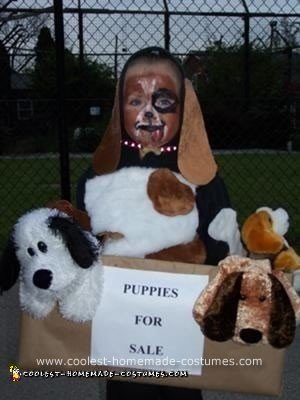 We dressed her up as a puppy by using a black sweatshirt and adding patches of faux fur, white and brown. We added faux fur ears as well and then the rest in black (shoes & pants). We got a box and covered it with brown paper after poking holes into it that will hold … Read more 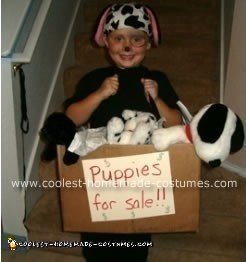 This is our Homemade Puppies for Sale Halloween Costume. Take a cardboard box and paint the words “Puppies for Sale” on it. Attach stuffed puppies inside the box, arranging them so they peek out. You can also paint your face to look like a puppy. Hope you like the idea! 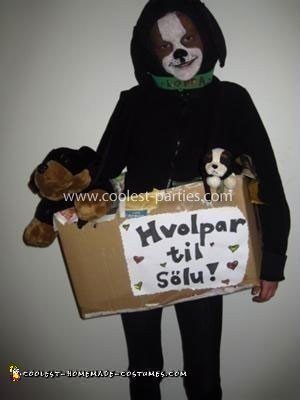 We have a dog and my eight year old girl is a big dog lover and she really wanted a dogs costume this year. We surfed the internet and decided “Puppies for sale” would be a great theme. We saw lots of great ideas on your site and those were our inspiration to the costume. … Read more 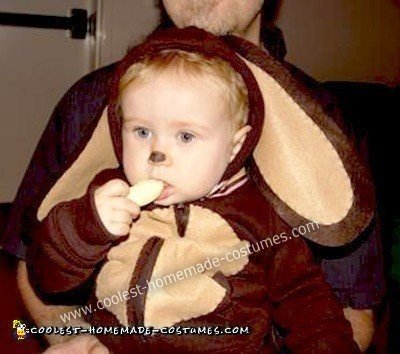 My 21-month-old daughter loves dogs. Every time she sees a dog she yells, “puppy! puppy!” When she sees a new kind of animal and she doesn’t know the name for it yet, she says “puppy!” So it was pretty obvious what she should be for Halloween. I went looking online for ideas of a Homemade … Read more 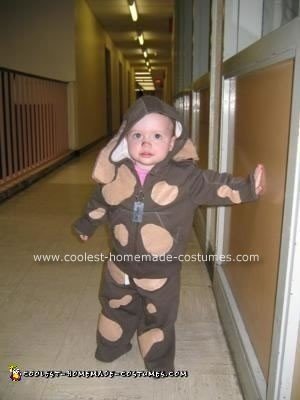 This Dog Costume was my first homemade costume, but pretty easy to do. I started with a brown sweatsuit which included a hooded sweatshirt. I hand stitched khaki colored felt cut in random, free flowing shapes, all over the sweatshirt and pants. The ears were made of brown and khaki felt. Using fabric glue, I … Read more 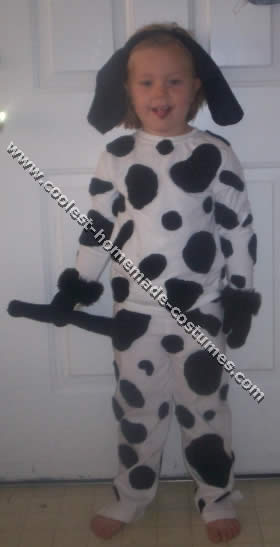 This was a very easy no sew Dalmatian. I went to the Goodwill and got long shirt and pants in white for about $4. Went to Wal-Mart and got fuzziest black material about a yard of for about $3 and a black head band for $1. We had a pair of fuzzy black mittens. I … Read more 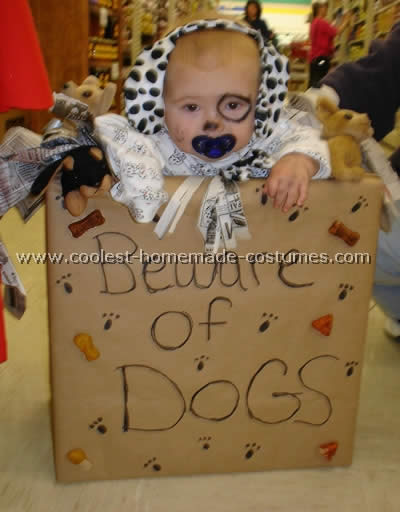 I saw many dog costumes online but nothing like this one. You will need: one small box dog treats, news paper and a roll of brown packaging paper, black marker, scissors, puppy dog ears and black Halloween make up, hot glue and stuffed doggies. I took the box and hot glued the brown paper to … Read more 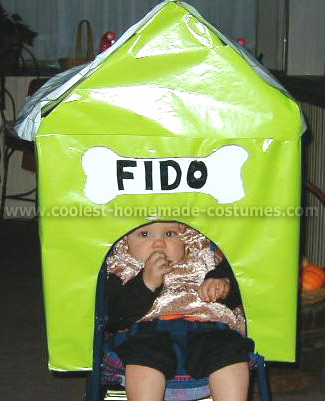 After enjoying a year of extended-by-me maternity leave, funds were low and my husband begged me not to go overboard for my baby’s first Halloween. Realistically, it wasn’t really going to show anyways since he’d be riding in his stroller and I had to put a blanket over him (a cool windy night had been … Read more