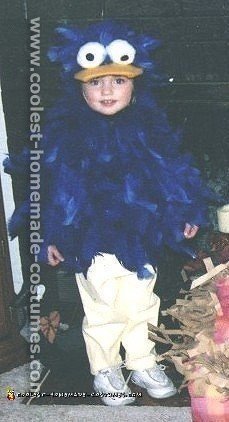 I used a hooded sweatshirt. For the costume, I hot glued feathers (from a craft store, but I cut some out of felt to fill it up better) all over the sweatshirt.

For the beak and eyes, I used a ball cap and covered the bill with yellow/orange material and glued white pompom balls on top with google eyes on those. Pair it with yellow sweats, and you have a nice warm costume. 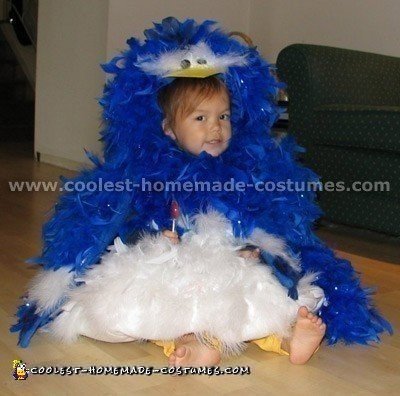 I had this pattern from my sister’s costume last year (she was some Pokemon character- some kind of mouse) and my sister is small, so I thought I could just make the size 4 for my daughter- even though she’s not even 2 yet!

I basically followed the instructions for that pattern, omitting the wire tail thing and the mouse ears. I used blue fleece for the main body and head and white fleece for the tummy part of the costume. It actually looked fine just like that, but NOOO…I had to make it all fancy with feathers and stuff (ha-ha).

I had packages of blue and white feathers, which I had purchased from the dollar store and planned to sew each and every feather on the blue bird costume. I covered the tail (can’t see it in the picture) but that took a long time, so I basically thought there’s no way I would make it on time for Halloween, not to mention stay sane.

So I bought some feather boas and sewed them on. It worked out quite well. Made it a bit puffier than I would have liked it, but it’s still cute, I think. The beak is made out of stiff yellow felt, cut into a triangle, and the eyes are just black buttons.

The wings and the tail of the blue bird costume I got from a Martha Stewart magazine (sort of – hers was more “elaborate”, using felt and more pieces, but I just used the basic tail shape and one of the wing shapes and sewed the feathers on the outer part only). The underside of the blue bird costume is just the fleece. I also sewed on a couple of elastic “bands” where her wrists would be on the wing, so she could “flap” them.

The body and the head of the blue bird costume is lined on the inside with lining. My daughter is wearing a blue, long sleeved shirt underneath and yellow pants.

I’m not sure exactly how long it took me because I worked on it in batches; I’d say roughly 6-8 hours total. It just felt like a long time because it took me about 2 weeks overall (10 minutes here, an hour there, type thing).

I don’t know if I could put any tips for making it; just the “use the feather boa technique to save time” thing. Oh, and make sure your kid isn’t allergic to feathers. ;)